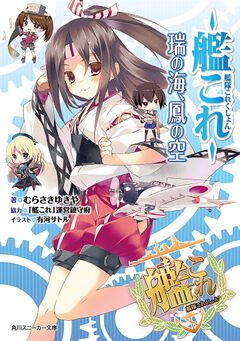 The cover of Volume 1.

Kantai Collection - KanColle - Auspicious Seas, Phoenix Skies (艦隊これくしょん -艦これ- 瑞の海、鳳の空) is a light novel series written by Murasaki Yukiya. The illustrations are done by Aruga Satoru. The series is published by Kadokawa Shoten. The series covers three volumes and was completed with the release of the third and final book on January 1, 2016.

A young man prepares to meet his maker as his ship comes under attack by "Abyssal" ships. However, Type 99 Dive Bombers suddenly sweep in, saving his life. Before his eyes stands a beautiful young girl upon the sea, drawing her bow - Zuihou. Soon, he receives a special appointment to become Admiral of a naval base, home to the "shipgirls": young girls that somehow had the power to defeat the Abyssals. Following the sounds of aircraft engines, he once again meets Zuihou. And thus begins a love story on the battlefields of KanColle[1]!

Every Chapter (after editing) must confirm to Names and Terminology Guidelines & The General Format/Style Guidelines.

If you enjoyed this series and are interested in more (or even if you're not), please feel free to leave any comments or concerns on the forum feedback thread.