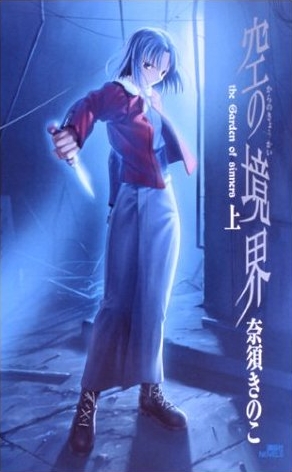 Kara no Kyoukai ("空の境界") is a series of stories written by Kinoko Nasu (奈須きのこ) with illustrations by Takeshi Takeuchi (武内崇). The first five chapters were posted online on Nasu and Takeuchi's dojin website "Takebouki (竹箒)" starting Oct 1998, and the last two chapters being released at Comiket 56 in 1999. In 2001, part of the story was included in "Tsukihime PLUS-DISK (月姫PLUS-DISC)," created by TYPE-MOON, the doujin circle Nasu and Takeuchi joined. The story gained huge popularity, and the doujinshi edition of the stories saw release on December 30, 2001 at Comiket 61.

Additional information about the light novel can be found here.

The Kara no Kyoukai series is also available in the following languages:

A teenage girl, who possesses the "Mystic Eyes of Death Perception," a supernatural ability that allows the user to see the "death" of everything in existence and kill the object by destroying its "origin." She recently recovered from a two-year coma caused by a traffic accident. Prior to the traffic accident, she originally had two personalities, a male personality named Shiki (織), and the original female personality Shiki (式). Children born into the Ryougi family are generally male and are raised with two personalities, so the male personality is customarily called the "yang" personality, while the female is called the "yin" personality. It is easy to tell which Shiki is speaking at a given time because they both have a distinct style of speaking, most notably that the female Shiki refers to herself with the pronoun watashi (私), while male Shiki refers to himself as ore (俺). After waking from her coma, Shiki discovers that she can no longer feel the male Shiki's presence and assumes that he died because of the accident. She also feels a detachment from her memories before the accident, and while she knows she is Shiki, she does not feel that she is. In the hopes of regaining herself and the "dead" Shiki, she puts on a cold facade that somewhat resembles the male Shiki's and tries to act as the female Shiki did. Touko understands the sense of detachment Shiki feels, but considers the current Shiki a third, new personality.

If you enjoyed the translation, why don't you tell us in the [www.baka-tsuki.org/forums/viewforum.php?f=41 project subforum]

Due to Del Ray licensing Kara no Kyoukai for English release translation on this project has been dropped. Edited versions of current chapters will be uploaded soon but no more chapters will be translated. Expect to see the first volume released commercially in English sometime mid 2009. Possibly.

for translating and giving us permission to host these translation here. If you wish to know which chapters were translated by them please see the Registration Page

The KnK series is completed and the PDF files can be found here. 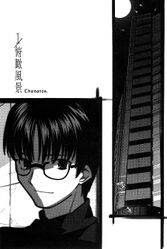 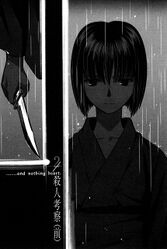