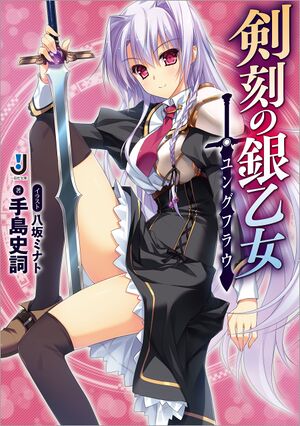 Kenkoku no Jungfrau (剣刻の銀乙女, Yomigana: けんこくのユングフラウ), which loosely translates to Silver Maiden of the Blade Seals, is a Japanese light novel written by the author Teshima Fuminori and illustrated by artist Yasaka Minato. The series has concluded at 7 volumes.

In a certain Legend from a bygone era. Many kings, many countries and many faiths intermingled and clashed in an era without order. In this era, one who was known as a devil appeared.

Many kings challenged him; one king because demon’s territory and citizens had become too great. Another king just to display his bravery and earn prestige.

And many countries were destroyed. Every kind of blade was taken up, every kind of magic was chanted and all types of wisdom were employed but the devil’s body carried no wounds — it is here that the legend begins.

"There are blades that can kill the devil. I seek people of great skill for them. Isn’t there anyone who will follow me?"

There were twelve blades. Each of the twelve kings dispatched their greatest knights.

The twelve knights and the sage challenged the devil, splendidly killing it. Thus the sage became king and the twelve countries one. The twelve knights became known as the Knights of the Round Table and the ideal of every knight. Then time passed unto the present.

Now the 12 blades have re-emerged in the form of <Blade Seals>. However greed has caused conflict over ownership of the <Blade Seals>.

Follow Heath, a fairly average guard, as he gets unintentionally wrapped up in the conflict.

Translators are asked to register for chapters they want to work on. (See the Guideline page for usage rules).

Find a list of Terms, names and their raw forms here. This list is compiled by Yascob for his translation but feel free to propose changes and note this may not be accurate for TheCatWalks version of the translation.

The Kenkoku no Jungfrau series by Teshima Fuminori[edit]