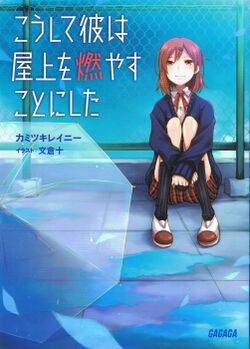 Koushite Kare ha Okujou o Moyasu Koto Ni Shita (こうして彼は屋上を燃やすことにした "And so, they burned the roof just like that") is a light novel written by Kamitsuki Rainy and illustrated by Ayakura Jyuu.

After being dumped by my boyfriend, I -- Miura Kana, made my way to the school's roof, intending to end my life. However, what I found there was a peculiar girl who called herself 'scarecrow' -- along with the venom-tongued 'Tinman' and the smiling 'Lion'.

Lion told me, "Since we've all decided to die, why don't we first exact revenge before dying?"

And so, I became Dorothy, the one who would kill the Wicked Witch of the West and fulfill everyone's wishes, the 'Wizard of Oz'.

Underneath the clear blue sky, this was our only Sanctuary. Through interacting with others, we discovered what we lacked in our selves...

Used to like Ame-kun.
Hates the rain. Currently in a state of insomnia.

Likes peace, afternoon naps, and the blue sky.
Because he lacks courage, he can't get angry.

Likes lying, singing and the evening sky.
Because she lacks intelligence, she can't cry.

Likes being alone, reading and the night sky.
Because he lacks a heart, he can't laugh.