Dragons resided on the moon's surface and satellite orbits.

Two thousand years ago, the ancient Greeks called this domain "Hyperborea" or in other words, "the country beyond the North Wind."

In fact, a certain girl was sitting in a corner of the "nest" drifting on a satellite orbit while leaning against a rock face, leisurely looking up at the heavens filled with stars.

The small dragons known as Raptors in the lower realm apparently made their "nests" on what were similar to so-called asteroids.

These small astronomical objects could be considered extremely small asteroids.

...Except that these lumps of rock on satellite orbits were ultimately created from dragonkind's magic rather than providence of the universe.

Currently, the girl was alone in this "nest."

The original inhabitants seemed to have sortied in full force to attack the ground.

From this distant height, she enjoyed the pleasure of watching the stars alone—

"...Bow of the Southern Sky. Is someone using it?"

Vaguely sensing the pulsation of a nostalgic power, she whispered inadvertently.

In her resided the power of dragonbane named the "dragonslaying arrow" and just now, someone had apparently fired the weapon which existed as its pair. It was most likely somewhere on earth.

The bond between the pair of bow and arrow notified her of that fact.

If the power being used had been the Sword or the Spear, she probably would not have sensed it.

"Someone has caught the queen's eye? Or perhaps it was thoroughly plundered...?"

She tried to voice out various possibilities but did not continue to dwell on the matter.

After all, she could find out just by locating the user. The corners of her lips twisted into a grin. After a long while, she was thinking about the ground surface again.

If the Bow's inheritor were someone ordinary without sufficient capacity, then as the master of the Arrow, she shall simply execute the unworthy.

Conversely, if the wielder possessed the capacity to become a hero—then a fight would be nice.

...Just like that time in the past when she had personally sent the queen to her grave.

"If it's that guy, maybe he might know something."

She recalled the old acquaintance who supposedly lived in North America.

He used to frequently show off that Red Whatever nickname the humans had chosen for him. Despite his lofty stature as a dragon king, he was a weird fellow who actively sought contact with the lower realm.

"I suppose I shall find that guy to question first."

As fellow dragon kings, even a sudden visit should not cause any problems.

Optimistically thinking to herself, she smiled. It was a smile filled with childishness and ambition, quite fitting for her young face.

For a human, her appearance would be that of fifteen years old or so.

With that form, identical to a human's, she was the very image of a dignified maiden.

Worn on her body was what the lower realm called a white one-piece dress. But no matter what, a human could not possibly be hanging out contentedly at this height, dressed in this manner, even twirling the hem of her dress with full liveliness.

"My minion, bring forth to me the Arrow of Sirius!"

Responding to her call, a shooting star fell from the myriad stars in the heavens above.

In order to deliver her, wingless as she may be, to the vast blue land beneath—

"How could this be even possible? It's totally unbelievable...!"

"Oh well, both of us were too careless on this issue. Can't be helped."

"But Haruga-kun, this nonsense about me making a packed lunch for you every day, also engaged as your fiancee, even to the point of taking charge of all your domestic affairs...! These completely unfounded rumors have spread throughout the school!?"

"Juujouji, those rumors actually have some basis behind them."

It was Saturday morning in the living room of the Haruga residence.

The master of the house, Hal, was sitting in an armchair.

Orihime was seated over on the sofa. As a side note, the living room's former state of pandemonium was now neatly organized and thoroughly cleaned.

This was all accomplished by the slightly airheaded classmate currently in front of Hal.

For the last few days, Orihime had visited the Haruga residence diligently, dedicating herself to cleaning and tidying with great focus.

"B-But I only gave you a lunchbox on that one occasion..."

"Yes. But looking back now, receiving it in front of everyone in the class was definitely a fatal mistake... Because we left school early that time, it even developed into a soap opera plot of our abortive attempt to elope."

"Besides, if you hate these rumors, just don't visit this house."

Hal proposed a simple solution that addressed the root.

But Orihime readily rejected it.

"That doesn't matter, actually. Anyway, after a minimum level of cleaning and tidying, I've cleared out a place to stand at least. I will bring Hazumi along next time. As long as we're not spending time together alone, weird rumors won't spread, right?"

"Yes, because Hazumi also feels fascinated by you, Haruga-kun. This is perfect."

After the battle with Soth, Shirasaka Hazumi first went to a hospital to get examined.

However, Hal had heard that there were no abnormal symptoms with her health and she was safely discharged. There was no real reason for her to come here, so bringing her was pointless, right?

Still, Hal shelved his doubts for now and first confirmed the matter which concerned him.

"Not too good, apparently. Being treated as a live sacrifice seems to have caused severe harm so recovery has been very slow. She needs to rest as much as possible to recuperate properly," said Orihime with worry.

Fortunately, Akuro-Ou was steadily recovering after getting struck down by Soth. Given just one or two weeks of time, the durable bodies of "serpents" were able to heal from injuries, even very serious ones.

In other words, this also proved that Minadzuki had suffered extraordinary damage...

"Speaking of injuries, how is Asya-san's 'serpent'?"

"She seems a lot better than before. I'm not sure if it's an effect of that power but after defeating Soth, she recovered to a slightly healthier state than being on the verge of death."

Rushalka was originally expected to exhaust her strength and die during the final battle against Soth.

Although her current condition could not be considered good, at least her life was out of danger.

Furthermore, Hal had reported to Hiiragi and Kenjou that the victory was due to Asya and Rushalka's dormant power.

After all, including Hal himself who was in the middle of it all, no one could explain clearly what had happened.

To avoid trouble, muddling through with a random lie was the best course of action. However, Hal still explained to Orihime and Asya, who had participated in the battle against Soth, everything from the start since his first encounter with Hinokagutsuchi.

As a side note, the girl who took on the fire god's name and called herself the devil had not appeared for quite a while—

"Still, you should get yourself examined or tested, Haruga-kun, to see how out of ordinary your body has become. This feels so much like those masked characters in American comics. It's very interesting and exciting."

"No, I'm not Spiderman. Neither did I come from the planet Krypton," retorted Hal indifferently to Orihime's giggling.

Putting aside whether it was good or bad, being able to joke around with this matter could probably be considered adaptability exclusive to the generation born after dragonkind's return.

"By the way, Haruga-kun, how about checking out the UFO Research Club next time? Since we are nominally members, after all, and Mutou-san already invited us."

"But... Although it might sound a bit much to say this, no good can come out of professionals like us showing up at an amateur research club. For either side."

"Don't worry. It's just a high school club activity. You don't have to be so concerned."

Orihime swiftly refuted Hal's reason for not wanting to go.

"Stop scrounging for excuses. You're supposed to say yes immediately to a friend's invitation. After all, for a lazy guy like you who avoids social interactions, Haruga-kun, invitations must be hard to come by, so it'll work out just right if you accept every last one of them."

Nevertheless, given Hal's abilities in reading people's words and behavior, he could at least tell that her attitude stemmed from a kind of care and consideration. But to be honest, Hal was very afraid of meddlesome people like her.

Juujouji Orihime was definitely someone to avoid after all.

Hal's old plan to retreat from Tokyo surfaced in his mind again.

However, issues such as Asya, Hinokagutsuchi as well as his ridiculous body were all popping in and out of his thoughts—

Hal looked again at Orihime's face that was cheerful as usual.

She responded with an innocent smile. Influenced by her, Hal said reflexively, "...Is that so?"

"Yes, indeed. Then let's visit within the next few days."

Just as Hal was about to relent and agree, he received a call on his cellphone.

It was Asya. He instantly picked up.

'Oh Haruomi, I'm going to drop by later. I've got something to show you. Also, what happened earlier needs to be redone all over again...'

'Didn't I say I was going to cook lunch to prove my femininity? After shopping and getting things ready, I'm heading over to your house, Haruomi.'

"What a coincidence. Just like last time, Juujouji happens to be here too."

Hal heard a gasp on the other side of the line.

'U-Umm, Haruomi, don't get the wrong idea, okay? The reason why Orihime-san is taking care of you, Haruomi, and even cleaning up your house is because she is extremely friendly and slightly airheaded. Things like seeing you as a boy or wanting to attract your attention—There isn't even one billionth of a chance of that, absolutely don't misunderstand no matter what!'

"Like anyone would be stupid enough to misunderstand that!"

'That better be the case... Oh right. I'm going to impose on your hospitality straight away.'

'You can take care of that yourself, Haruomi. The maiden in my heart is currently screaming out that you two cannot be left in isolation any longer no matter what!'

The call was hung up right there.

Asya was apparently feeling the wildness inside her body warning her with some kind of alarm. What exactly was she taking precautions against?

"Was that Asya-san calling? Is she coming over later by any chance?"

Meanwhile, listening to the conversation on the side, Orihime was smiling cheerfully while she spoke.

Clunk. The sound of entry from the front door. Pitter patter. Then came the sound of frantic footsteps.

Hal did not expect Asya to just barge into the living room like that.

During the phone call just now, Asya seemed to be in the neighborhood. Then seeing her attire, Hal and Orihime both stared wide-eyed.

"I've decided to transfer into your school. As comrades studying in the same school, let's take care of one another from now on!"

Panting heavily while she spoke, Asya was dressed in Kogetsu Academy's uniform.

The girl, who originally used her position as witch to escape Hal's fate of being bound by age to attend high school, was now making an unexpected declaration of school enrollment. 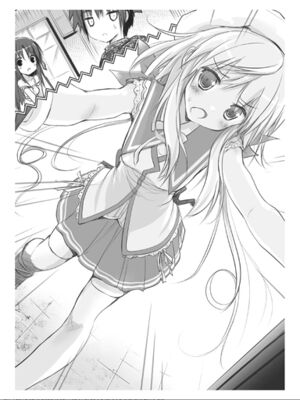 What had compelled Asya to do this? Even as her childhood friend, Hal was baffled.

But for some reason, he could imagine how ordinary methods were absolutely not going to work in handling his school life from this point onwards.