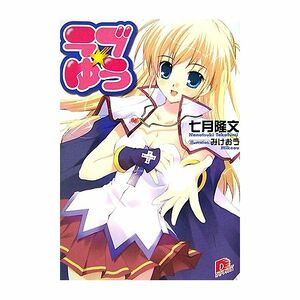 Love★You (ラブ★ゆう) is a light novel series written by Nanatsuki Takafumi (七月 隆文) and its illustrations done by Mikeou. The series is complete with 6 volumes.

The protagonist of this story is Shun who is unable to imagine for some unknown reason. During his childhood, this caused him to be an outcast. However, when RPGs came about, after playing and enjoying, he gets to mix around his friends once more. Partly due to this, he is simply addicted to the RPG series "Dragon Breath". In "Dragon Breath III", the hero is a female who is kind and enjoys helping everyone. Despite the cruel fates and disasters that await her, she overcomes them all and (is supposed to) eventually save the world. Shun likes this hero a lot, and he trains her up to lv99, (for some reason her intelligence is only at 40 even at that level) and after completing everything possible, he sets off to fight the dark lord(魔王). As he is setting off, for the first time, he imagines how would it be like "if the princess is sitting beside me now". And... a strange thing happens...

(Predictably) The princess gets out from his TV, and at the same moment, ALL the Dragon Breath III in the world hangs, unable to load (due to the princess missing?). And stunned at the scene, Shun was unable to move for a second. The princess then gets up and... Opens his cabinets (then looks rather displeased as she didnt find any items). And then she talks to Shun, asking where this is, who he is etc... However, Shun thinks about it a little and hesitates to tell her his name. Meanwhile, the princess walks out of the room, and smashes the flowerPOT (how many times have you gamers smashed other peoples pots or looked into peoples cabinets etc? Out with it!). Unable to find anything once more, she continues her search. Later on, she came to know of the protagonist's name, Shun. And by some coincidence, it is the name of the Dragon Spirit that she is supposed to undergo a marriage ritual with in order to gain the power to fight the last boss.

If you enjoyed the teasers, why don't you tell us in the Feedback thread

The links below are from the Translation Project at NanoDesu Translations

Season 2 - Rosalie and the Tsundere!