They consisted of members of the Unstoppable Silver Flow[Silver Meteor Army], the Olmutz Army, three different Knighthoods, men serving under various nobles, and refugees from Agnes.

The moon was high in the sky, and the residents were wrapped in blankets and off to the world of dreams, but the people on duty were still awake.

“I'll leave the distribution of food to you. Do this quickly, citizens of Brune.”

“Those of you from Zhcted, if you have time to talk, why not go on patrol? Those of you who can't move, use your head. Use it twice as much to make up for what your body can't do.”

Rurick and Gerard sarcastically assigned miscellaneous duties, staying up throughout the night. They seemed to be working unwillingly.

However, their leaders were even more busy. Even though they had not yet recovered from the fatigue of battle, Tigre went to visit all the nobles and Knights. Unable to refuse their requests, he ended up offering his help.

Massas, Augre, and Auguste managed the place to prevent overcrowding. Eventually, he was able to meet Teita and Batran. He had finally returned safely and gave brief words to greet them.

After all the meetings at the end of the day, Tigre sat down and sighed strongly. Two beautiful women looked down at the young man with red hair who was exhausted. They were Mira and Ellen.

“Tigre. Come to my place. I will make you some tea to help you get rid of your fatigue.”

While teasing him and speaking to him with care, Mira stretched out her hand with an expression that was more cute than beautiful. On the other side, Ellen was being more direct and simply pulled Tigre to a stand.

“Unfortunately, Tigre and I need to chat for a bit... Let's go.”

However, Mira did not stand there silently. She stood before Ellen, preventing her from leaving. The two Vanadis glared at each other dangerously.

“You were a woman who was not there when it was most important. What could you possibly say to him now?”

“I should say the same to you. You managed to use his kindness to sell your help at a high price.”

“Even you are not helping him for free.”

“I've never jacked up the price just by how the person talks, unlike a certain someone.”

Every time they spoke, their eyes became sharper and their mouths distorted more. Tigre did not feel the need to arbitrate. He was mentally tired, and it was simply too bothersome.

Mira began to speak to object to Ellen's provocative attitude.

Suddenly, a soldier of Olmutz stopped by with a report saying it was necessary for Mira to be present to manage the troops and the supplies.

“I understand. Once I finish my business, I will return.”

There was no hesitation in Mira's response. She was not one to give priority to her own conveniences over public matters. Though her expression did not change, Tigre and Ellen could not miss the disappointment coloring her eyes.

“... Um, thank you for inviting me, Mira. If you are fine with it, perhaps another time.”

Tigre spoke with the intent to comfort her, telling her she did not have to worry about it. Mira smiled in return and nodded.

It was an unexpected windfall for Ellen. Once she saw Mira walk away with a slightly complex expression, she pulled herself together and pulled Tigre out by the arm.

“Where are we going?”

“Somewhere where we won't be interrupted.”

The two left the camp and walked to a prairie where the wind blew. They walked a long distance at a leisurely pace until Ellen stopped.

Ellen quietly let go of Tigre's arm. The two sat on the ground with a wind dancing vibrantly about the surroundings. Perhaps Arifal had created it.

“Half a koku. You've been busy, so at least a quarter koku. It should be nice to spend your time in a place like this without doing anything.”

Tigre understood at last. She wanted to take him away from the camp so he could rest.

Ellen smiled gently and held out her right hand. Within her grasp was a liquor bottle.

“I picked it up in your tent and hid it for our walk.”

Tigre was not particularly slow. He was simply tired, and he always relaxed his mind when he was near Ellen.

“I wonder if anyone will notice you're gone? Well, I suppose those that look for you will just think you're loitering about.”

Ellen took a quick drink from the bottle in her hand and let out a deep breath. Her eyes narrowed in dissatisfaction as she glared at Tigre, and she spoke with a gruff voice.

“Really, I wish you'd be a bit more aware. The moment I leave, some girl acts a little kindly to you, and you start drooling... You know, she's shorter than me and her breasts are smaller, too.”

Tigre was at a loss for words. Ellen pushed the alcohol to him.

Tigre gazed at the bottle, both tension and confusion in his face. He was embarrassed that he was finding it difficult to put anything into words.

However, Ellen gazed at him happily.

After a bit of hesitation, Tigre took the container and gulped it down. It was sweet and had a crisp acidity which pierced his nose and throat.

Ellen smiled proudly as Tigre returned the bottle. Ellen brought it to her mouth then suddenly looked at the bottle intently. Her face was serious and dyed red.

Tigre noticed her in the periphery of his view, but he could not turn to look at her in the dark. From her movements, he could tell she drank more.

She passed the bottle to Tigre again. He took it and drank more. His body was heating up from the inside. It was probably because of the alcohol.

The bottle eventually became empty as they drank in turns.

After that, Tigre turned to Ellen with his entire body, sat upright, and called her name.

He bowed deeply, his head to the ground.

He was speaking of the soldiers from the Unstoppable Silver Flow[Silver Meteor Army].

It was composed of a mixture of Brune and Zhcted soldiers. The Zhcted soldiers were Ellen's subordinates, and, depending on Tigre's decisions, many might have survived.

For the people who live in Brune, including Tigre, the invasion by the Muozinel Army was not a problem for others, but that was different for the soldiers from Zhcted.

The Olmutz Army followed Ludmira and fought for her, but the soldiers of LeitMeritz, including Rurick, fought for Tigre. What were their feelings, even if they were chosen by Ellen to stay behind?

Tigre sat up after hearing Ellen's voice. The girl with silver-white hair smiled gently at him.

Ellen lay on the ground as she said that. Though a bit embarrassed, Tigre lay next to her. Though he could feel the cold ground against his back, he could feel a heat in his body and head.

However, Tigre ignored that heat and looked about.

The sky was full of stars. Perhaps there were an innumerable amount of stars in his vision that would take a lifetime just to count. Though it was something he was used to seeing, it was curiously fresh.

He felt something soft touch his hand; it was Ellen's hand. Her slender, delicate hands did not seem like hands that brandished a sword about. Tigre softly grasped her hand.

“There is no need to regret the fights you have been in until today.”

Ellen muttered quietly, as if her voice was swallowed by the darkness.

“That's good. For those who have fought bravely for you, please pray to whatever God you may believe in.”

Inadvertently, he had put strength in the hand holding hers, grasping her fingers strongly.

When he turned toward Ellen, she tilted her head. There was valiance as a warrior, a brightness, and some expectation in her red eyes. 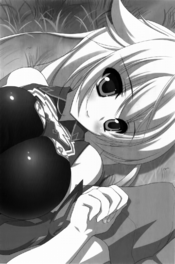 Quietly, Ellen spoke in a tone as if she were telling a secret story.

“I thought of you many times on the way to Legnica.”

Her words broke off, but Tigre understood.

How about you? Ellen was silently asking him.

He did not recall thinking about her, but he always had a yearning to see her again.

“... I kept thinking about how reliable you would be by my side.”

She twisted his fingers, but because he expected it, he did not feel pain.

“Why were you thinking about that during your fight? Well, I do understand, but... Couldn't you have chosen some better words? Weren't you worried about me?”

The silence from before had vanished. Ellen narrowed her eyes in dissatisfaction. Her tone was sulky rather than angry. Tigre apologized obediently, but he did not think “worry” was an appropriate term.

“I probably thought it would be fine if it were you. After taking care of your enemy, you would return.”

“What if I was captured or in trouble?”

Tigre could not immediately think of a response to answer the pouting girl next to him. Rather than thinking about it, there was probably only one answer he could give to her question.

It was not a false show of strength or honor, but purely sincere words. The person in question blinked involuntarily.

After staring intently at Tigre, Ellen returned her gaze to the skies. She finally said she would do the same for Tigre.

The wind blew lightly between the two. It was not natural; her ViraltDragonic Tool was being mischievous.

“That's right... You could push back an enemy numbering fifty thousand. I'm sure you could do that.”

Ellen muttered quietly, her face and tone were happy, but her voice did not reach Tigre through the wind. For a while, the two looked up at the night sky with their hands joined.

The girl with silver-white hair had a red face full of satisfaction.