Madan no Ou to Vanadis:Volume 10 Epilogue

Four days after the battle at Birche Lake, Tigre and company had returned to the castle town with Elizavetta. Elizavetta who once again explained the situation to Naum and the others formally announced that they were entrusted with Tigre.

And, the youth gently hugged the chestnut-haired girl who was bewildered after she saw Tigre. The girl wept in a loud voice in the youth’s chest.

In addition, on the night of that day, one Muozinel person calmly left the castle town.

That Muozinel person muttered with a sigh. Though it was a short time, it was also a fun trip for him. If that youth had remained Urz as such, he would have surely invited him to his native land.

Why don’t you leave such a cold country and come with me? With your bow skill, you’ll immediately obtain even the great title of “Star Shooter” that every archer wishes for…

However, when he left the castle town and had walked for a quarter of a koku, he threw away such sentiment. What he should do was to hurry up and return to his native land, and reported it to his master. That Tigrevurmud Vorn was alive and that his bow skill was more than what the rumors said.

Standing on a semicircular balcony, Tigre was watching the stars.

It was an inn located in Lebus’ castle town.

Elizavetta had told him to stay at the Imperial Palace, but Tigre politely declined.

There were many memories of his life as Urz in that Imperial Palace. And above all, it would confuse many people. When he said that, Elizavetta could not help but laugh.

What was prepared instead was this inn. It was a quite high quality inn even in the castle town and a bathhouse using steam was also installed. Ellen, Lim, Mashas and Titta also stayed at this inn by Elizavetta’s arrangement, and they seemed to be satisfied.

The dinner was also luxurious.

“Actually, I want to make a racket all night to celebrate your return.”

Mashas said so and revealed a wry smile. But as expected, everyone was tired to do that. Soon after the fight against the demon was over, they had to repel Kazakov’s army. There were also many wounds that were not cured yet.

“Well, whatever. When spring comes, come to Brune. Her Highness the Princess would also be eager to know about your safety after all.”

“That’s right. But, may I really return to Brune?”

Now, Tigre was to stay in Zhcted as a guest General for three years. That was based on a respectable contract. But, Mashas shook his head to him so as to say “don’t worry about it”.

“About this time, there is indeed a problem. I’ll go to the royal capital Silesia after this; there are a lot of things I have to talk about with His Majesty the Zhcted King. If I go back after having only confirmed your safety, it wouldn’t be any different from being a fool’s errand.”

What Mashas said was quite right, so Ellen and Lim said nothing. A decisive crack nearly arose between Brune and Zhcted. For Mashas, he would probably not be satisfied unless he raised at least one complaint.

After they finished the dinner, Naum and Lazarl visited the inn. They had probably heard about the circumstances from Elizavetta. When they saw Tigre, they respectively smile wryly as they were troubled.

When Tigre said so to exercise tact, the two men respectively gave words of goodbye and exchanged handshakes with Tigre. Any more than that was unnecessary for both sides.

After having seen off the two men, Tigre did not return to his room and instead came to this balcony on the second floor of the inn.

Night wore on and the castle town was reflected only as series of black shadows.

There was no light other than the shine of the moon and stars. Tonight was also without clouds and that was enough for the youth.

“──It sure was a long trip.”

As he muttered deeply emotional, he reminisced about the events of these several months. He had proceeded to the Asvarre Kingdom as a messenger, met Sasha, and met Olga and Matvey in the port town.

---Speaking of which, Sasha passed away…

When he heard about her death from Ellen, Tigre was at a loss for words for a moment. He regretted that he did not talk to her about more things; he recited the name of the Goddess Elis of winds and storms and prayed for the peace of her soul.

He had met various people in Asvarre. Prince Jermaine who tried to hold them prisoner. Prince Elliot whom they fought against. Tallard Graham who got Princess Guinevere as ally and ended up victorious in the civil war. His subordinates starting with Ludra. The mercenary Simon.

And the white demon Torbalan. Though he heard that Sasha had defeated him, it was a terrifying existence.

---I must know more about that black bow.

When thinking about the words of Torbalan and Baba Yaga, they seem to still have comrades. He did not know their purpose, but there was no doubt that he and his heirloom, the black bow, were involved. It was also necessary to have the Vanadis including Ellen give him advice.

Even in the dozens of days after he became Urz, many things had happened. He became a stable boy, a personal attendant and was then exceptionally promoted to adviser.

When he left LeitMeritz, it was the end of summer. He should have been able to return in autumn.

However, let alone autumn, winter was going to end soon. These were hectic days to the extent that he felt nostalgia from the numerous fierce battles in the Asvarre Kingdom.

He thought that it was good that he got to know Elizavetta, Naum and Lazarl.

He wondered about what would’ve happened if he had lived as Urz.

The youth vaguely thought about the path which he had closed by himself.

Elizavetta was a master whom he looked up to. Naum and Lazarl were also reliable superiors. There were many people whom he got along with to the extent of exchanging greetings. He might’ve eventually made close friends, found a lover and built a family.

Tigre shook his head. The him who walked a life completely different from the current him.

That was a fun imagination (thought).

And it was not something beyond imagination.

He heard a voice from behind. At the same time, a soft breeze caressed the scruff of his neck.

A silver-haired girl stood there.

“If you stay there dressed like that, you’ll catch a cold.”

“I wanted to enjoy the cool evening a little. What about you, Ellen? Are you all right?”

Worrying half seriously, Tigre asked. She had also gone through fierce battles just like Tigre. He wondered whether she should be sleeping or not. He was thinking that, but Ellen shook her head. She stood next to Tigre.

The two people silently looked at the sky for a while. There were many things that they wanted to talk about with each other. To the point that only one night would by no means be enough.

But, both of them could not readily start talking. The first words didn’t come out well.

How much time did they pass just looking at the starry sky like this?

Ellen asked as she suddenly remembered. 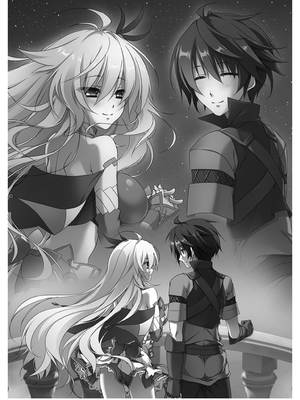 “That reminds me, what about the silver coin I gave you?”

One silver coin where “good luck” was written. When he had left LeitMeritz at the end of summer, Ellen had given it to Tigre. The youth shook his head with a bitter smile.

“It probably sank in the sea.”

After a short pause, he added.

At Tigre’s words, Ellen looked at the youth with a wondering face. She then smiled.

“I guess it’s fine if you think so. After all, you came back safely like this.”

They moved their gazes, which were looking at the starry sky, at each other’s faces.

That was a happy time.

END OF THE SECOND ARC