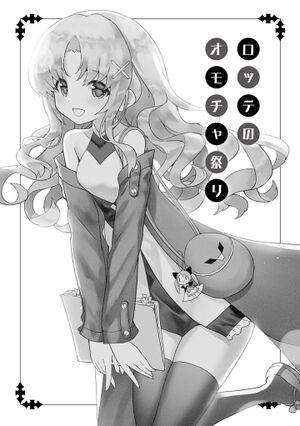 Tokyo Big Sight──the large event hall that was built on the reclaimed land 『Waterfront Subcenter』 that was facing the sea. It was in this place that the creative otakus were gathering.

That day the world largest scale event of toy and doujinshi(fanzine) <Hobby Festival Winter> was taking place. Kazuki was going to that place along with Lotte, Kamimura-san, and Mio.

「It’s a bit unexpected that Mio is coming along.」

「Because if I’m told that the cosplay outfit I sewed will be showcased, then of course I’ll feel curious.」

There was also a cosplay space at the Hobby Festival. Lotte and Kamimura-san had the ulterior motive of participating there.

It seemed their cosplay costumes were made by Mio for them.

「Mio-oneesan, thank you so much desu~」 Lotte acted playfully to Mio happily.

「But you must not pull in Kazu-nii to the dark side too far okay?」

Lotte was making that kind of puzzling reaction. ……Dark side?

The queue waiting for the opening of the door hadn’t entered inside the building, but it was in the early morning of midwinter. Mio was shivering all over.

「Mio-oneesan, didn’t I tell you that it’s better to dress warmly desu?」

「Be, because……this is an outing together with Kazu-nii after all.」

That Kazuki was throwing away any formal or stylish dressing just for this day. He was wearing a down jacket with cheap material that looked like garbage bags. It was cheap but very warm.

Kamimura-san was looking down on Mio with an evil smile pasted on her face. Mio made a sullen look saying 「What’s with you calling me normie~」.

Lotte untied half of the long muffler that was wrapped around her neck, and then she wrapped it around Mio’s neck while clinging tightly on her. Both of them were wrapped with one muffler, it was the so called couple roll.

「Ehehe, I thought that this will happen, so I came wearing a long muffler desu♪」

「But I’ll still punch you if you drag Kazu-nii too deep into the dark side.」

And so they entered the venue after everything that happened. The interior inside the hall could even be called as boorish.

However, there were countless booths standing in a row like food carts, whether they were a companies or individuals, each booth exercised their ingenuity to display and sell their new work or their product.

「What the company is selling is called finished product figurines, while what the individuals made is called garage kit desu.」

「Because it’s in the state of scattered uncolored pieces, so you have to assemble it yourself and paint them, and you have to draw the eyes with fine-point brushes desu.」

「Eh, troublesome-!? Or rather, you need to draw the eyes yourself on a face this small!?」

「Fufufu……it’s the happiness of awakening your wife of a different dimension into the three dimension using your own hands! If love is something that blazes even hotter the greater the obstruction is, then this is exactly what real love is!!」

When Kamimura-san interjected, Mio couldn’t pretend to not hear that and glared at her.

「True love isn’t something like manga or anime, it refers to me and Kazu-nii!」

「Fuh, in the first place something like three dimension love is just an eternal suffering of NTR and getting NTR-ed, deceive and being deceived……」

「Wha, what’s with you, today Itsuki-chan is extremely aggressive……. What kind of three dimension is that……」

「Is that so, so Kamimura-san is thinking like that about your relationship with me.」

「Hieh!? I’m sorry I got carried away, forgive me!」

「When I thought that you got carried away, but as expected you’re weak against pressure.」

「When otakus come to Tokyo Big Site, they will receive field effects and get strengthened-!」

Lotte said that puffed up with pride. Mio sent her a dubious gaze saying 「What are you saying」 after hearing that.

「……Aa, but there are garage kits that are amazingly pretty. Even though I thought they all are just indecent items. The making is really detailed, decorative……the color is also beautiful………」

Lotte was talking passionately with her eyes burning fiercely.

「So there is also this kind of world huh……」

Kazuki was in admiration while looking around at the surroundings. It was an unknown world for him, but a lot of people were crowding those. It was just that he didn’t know about it.

He had to widen his world more.

「……I want to try challenging it someday desu, but it’s expensive on top of being difficult. Similar to doujinshi, the individual pieces of work have high prices no matter what desu……」

When he looked around and tried looking at the prices, it seemed that the market price of one item was around ten thousand yen.

It also wasn’t rare for finished product figurines to be prized around that much too, but when thinking whether they could create it skillfully by themselves, the price was really out of reach for beginners.

「It’s a hobby with a really high threshold huh……」

「And so today we will aim at the limited item of the company booth while showing up at the cosplay zone desu!」

Lotte was pushing on the back of Kamimura-san who was feeling embarrassed and thought twice about doing this.

Mio also made fun of Kamimura-san while pulling her arm.

Kamimura-san was a shut-in, but getting used to going out in front of other people in a place where she could get the field effect as an otaku like this would be good training for her.

The girl herself thought so, that must be why she did her cosplay preparation and came here.

「Speaking about that, Mio is also doing cosplay huh.」

Kazuki showed his surprise and stared at Mio’s appearance. What the three were wearing were the costumes of the heroines of the series Mobile Suit Galpan.

Mio yelled 「Stand up people of this country!」 looking like an expert. The people at the surroundings were stirred hearing that and they stood up simultaneously.

「You even learned the speech……」

「I was watching the episodes all night with Lotte and Itsuki-chan. In making costumes, you have to make it by properly grasping the image inside the story. If not it will be rude towards the story and the people you will show the costume to.」

「I thought that it was just an indecent story anyway, but the story was actually interesting.」

「You are connecting otaku=indecent too much.」

Mio and Lotte were forming a crowd.

Kamimura-san seemed to resolve herself too and she raised her face,

She yelled that while plunging into the crowd.

The people gave applause while welcoming that.

Inside the train for returning home──Kamimura-san must be really tired from being unused to staying in a crowd, she was falling asleep tiredly between Kazuki and Lotte.

「It’s great that Itsuki-san was having fun desu.」

Lotte was happy as though it was about herself.

「Lotte too, it’s great that you were able to buy various things.」

Lotte was also greatly satisfied with the limited items she purchased.

「Believing that tomorrow will come like normal, and then buying the things for the sake of that from here on is really fantastic desu.」

「You don’t need to be exaggerating earnestly like that while holding the figurines.」

「But in my homeland……with my original position and my body……this was something impossible for me desu. This isn’t something to say to the person who saved the whole world but, my happiness is all thanks to Kazuki-oniisan desu.」

「I fought with Beatrix at that place because I was doing what I wished to do in the way that I wanted.」

As a result, something sprouted between him and Beatrix, and their fate after that was changed.

「Besides it’s something that is already too late since a long time ago.」

「That’s right. Moreover even Kazu-nii’s happiness is because Lotte is here. If Lotte is not here, then perhaps all of us will fight each other a lot more……」

Lotte was a girl that was like an expert of being considerate, so when someone looked like they would produce negative emotions, she would immediately detect and extinguish it.

The perfectness of that behavior was still going strong even after the power called Telepathy had vanished. She was sensitively detecting the negative emotions from every kind of indication like expression, attitude, and so on.

When someone noticed the girl naturally accomplishing that with perfection, they couldn’t help but feel her worth.

But for a girl who was younger than them to learn that kind of skill was also──it was the result from her unfortunate upbringing.

『If I don’t examine the countenance of other people constantly, I won’t even be allowed to exist.』

Such a curse was still lingering around her……. Kazuki was thinking that she surely couldn’t be freed from that except by filling her life from now on completely with happiness.

「The operation, will be soon huh.」

When he spoke those words, a strange chilly tension was hanging in the air. Even though they had heard that it wasn’t an operation with a low success rate.

「Yes, Clark-oneesan said sorry to me that it was late when she contacted me desu.」

Lotte’s sickness was something incurable in the religious country Seinmundo that had discarded science, but if it was America whose science was more advanced than even Japan, it was a sickness with enough prospect to be cured.

However America hadn’t really been able to regain their footing from the state of confusion due to the civil war of the South against the North──it was to the degree that the city function was demolished──it took time until the preparations for Lotte’s operation was put in order.

「I’m going to go together with you too.」

「……Yes, it’s heartening that Kazuki-oniisan will accompany me together desu.」

Lotte too must have her own anxiety.