Exhausted. That night it was exactly a tiredness like slogging inside mud.

It was Lotte’s room. On top of the bed, the two of them were sitting side by side. A sweet smell of shampoo from just out of the bath was drifting in the air. Lotte who wore a baby-doll in place of pajama talked while leaning her body on Kazuki.

The one who was tired was not only Kazuki. Rather than him, surely Lotte was even more tired.

―After that, Kazuki and the others got out from the Haunted Ground and reported to the Knight Order, then just like that they were transported back home to the Witch’s Mansion.

But Lotte didn’t immediately return home and volunteered for a work by herself from the Knight Order.

“Please let me help out too for the analysis of Yumeno-oneesan’s mind.”

The Knight Order was going to conduct mind analysis on Yumeno-san who lost consciousness from magic intoxication. It was fine to just hear it getting said gently as mind analysis, but in reality what was going to be done was pulling out information using Telepathy―so to speak, a mental interrogation.

Kazuki felt uneasy of that. In the case that the information couldn’t be pulled out smoothly, the Knight Order might use a forceful Telepathy and if they were being untactful they could even use things like drugs.

Yumeno-san had resolved herself for that, and he also understood that they had to get the information about the spies even if they had to resort to such method however….

With regards to this matter, there was nothing that Kazuki could do….

Lotte had brazenly bragged about her own ability in Telepathy towards the mind expert unit of the Knight Order.

With Commander Yamagata’s mediation, Lotte’s request had gone through.

Saying such to Kazuki, Lotte was heading together with the Knight Order to their facility.

She didn’t come back home until night.

“It seems that the personality of Yumeno Kaori had disappeared from Yumeno-san desu.”

The words that came out the foremost from her mouth made Kazuki went “Eh?” with surprise.

“According to the psychologist that was in the Knight Order, it looks like such thing often happen desu. Meeting painful experiences in the past left various symptoms in the heart from trauma…a different personality was created to protect oneself and the flashbacks of those times would be replayed many times inside their mind… If the past happening that became the source of such symptoms can be overcome then they can heal, there are many such cases. Rather than saying that the multiple personality disappeared, it’s more like the other personality integrated back to the original personality, but…”

Does that mean that Yumeno Kaori had finished accomplishing her role?

From hereon her role would not be as a planted spy, but the girls’ original….

With regards to the personality that disappeared, Kazuki’s chest mysteriously became filled with a lot of pain.

Yumeno-san faced her past, and exactly just like her words, she won.

“The wound of the heart is healed if the trauma is conquered. It’s simple saying it in words but it’s really hard in reality desu. It’s something that one absolutely cannot overcome only with the person’s own power. That’s why such problem like this depends on how much the surrounding people can become the needed strength for her desu.”

Saying that, Lotte sensed the pain in Kazuki’s heart, as if to cheer him up from that Lotte hugged Kazuki tightly.

“I think it was thanks to Kazuki-oniisan giving Yumeno-san a push on her back desu.”

It became necessary for the assistance of people outside to sever the negative circle….

Kazuha-senpai whose body stiffened from nervousness appeared in his mind.

Both of them like that flopped onto the bed.

“We couldn’t take out all the information from inside Yumeno-san in just this one day. But in order to not put too much burden on Yumeno-san’s mind, it was decided to steadily investigate the mind through several days. That’s why I will be going back and forth to the facility during these several days desu.”

Kazuki hugged Lotte back tightly. The pain inside his heart was vanishing, replaced with a spreading warmth.

It was surely the hardest for Lotte. To do something like interrogating the heart of her own comrade.

In the first place, she was even the one that doubted Yumeno-san in Kazuki’s place.

“Always disregarding about yourself, you just keep prioritizing other people.”

Kazuki and Lotte hugged each other strongly as if they were trying to become one.

“Because Kazuki-oniisan directed your feeling that doesn’t doubt anything to me who always doubted everything…that I can also become someone that believes in kindness desu. The people around Kazuki-oniisan too, everyone is kind desu. The feeling of kindness and wanting to make other people happy will also rapidly infect the surrounding people, that’s what I think. Because Kazuki-oniisan is kind…someday not only between our confined circle of companions but everyone of the whole wide society is going to become kind, isn’t that so, something like that.”

“You make too much of me there.”

The scene of the day when he was discarded by his mother….

“Perhaps, I merely just want to be recognized by someone. I cannot forget how a long time ago, I was discarded by my parent.”

He was reminded of the look of Kaori at that time who was vanishing while saying ‘I want to be recognized’, that sight stabbed his heart intensely.

He wondered that perhaps Yumeno-san’s journalism soul would become her attribute that would let her persist through everything from now on to her whole life. Wounds would someday heal, and hearts would become something complete and unshakable….

“I, before I realized it, my feelings that thought it’s fine even if I die anytime had gone desu. That’s just a trivial matter but, thanks to Kazuki-oniisan, the wound that was in my heart before this was filled already. The thing I want to do with Kazuki-oniisan, there are a lot right now desu!”

Lotte faced Kazuki and showed him the best smiling face that she had made until now before saying in a singing tone “Tonight too I get to monopolize Kazuki-oniisan~”. She then grinded her face on Kazuki’s chest.

“Then what are you wanting to do right now specifically?”

Kazuki tried to ask her again.

“I want to do adult pro-wrestling make believe desu!”

“When I watch manga or anime, sometimes the phrase [adult pro wrestling make believe] comes out. I feel some kind of a little perverted nuance from the scene, but I don’t really understand!”

“I wonder, isn’t it fine for you to just keep not understanding such things…”

“For Kazuki-oniisan to treat me like a kid immediately is unfair―. There is not a thing that changed in my body except one, even though I’m at the age where I’m immensely full of curiosity about perverted things.”

“If I got tempted more than this even by Lotte, my reasoning will get completely burned down before long you know.” 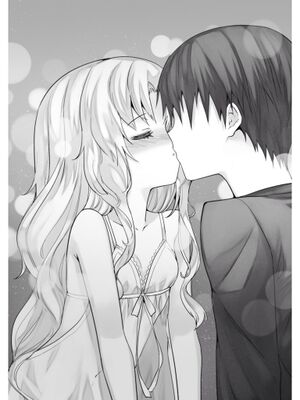 “Ehehe, does Kazuki-oniisan get properly conscious of me as a woman?”

“Today, what you are wearing is different from your usual pajama huh.”

Lotte always wore animal pajama, but tonight after she got out of the bath she was wearing a silk baby-doll that was so thin as if her skin was going to see through.

It was a lovely adult underwear that felt like a fraud with word like ‘baby’ in its naming. A slit was entered on the area of the bust in a front open style and the skirt was stretching out airily. The butt was peeking out from the short skirt.

Lotte rubbed her body against him playfully. Kazuki desperately endured the feeling of wanting to stroke that squishy skin all over.

Perhaps such fretting thought of Kazuki was also being transmitted to Lotte. Lotte floated a composed smile and reached out to Kazuki’s face while saying “Kazuki-oniisan-!”, before ‘chuu’ she gave him a restrained kiss.