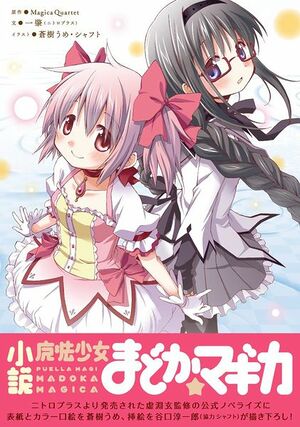 The two volumes were also combined into a single, 532 page, paperback novel featuring a new cover illustration by Ume Aoki. It was released on May 8, 2012.

She will not know yet if this encounter is a mere coincidence or a necessity. Which would be, an encounter that would change her destiny. (ref: original sentence from novel adopted)

Do you remember this girl? This is a story about Kaname Madoka, a story that tells of her undeniable existence. (ref: original sentence from novel adopted)

This is a whole new story of magical girls. Madoka Kaname, an eighth grader of Mitakihara middle school, is a girl who lacks self-confidence. Although she would get distressed and dismayed at times, she still got through every day with the help of her friends and family. On one day, her road crossed with something inexplicable. And from then on, her track was deviated from the usual, and she had to meet her fate…

The TV animation ‘Madoka Magica’ is novelized at last! This is a story of miracles and magic in the female protagonist’s, Madoka Kaname’s, perspective.

Homura Akemi is a girl who transferred to Madoka’s middle school. She is good-looking, has transcending academic results, and excels in sports. However, she is quite apathetic and cold. She seems to be a magical girl; what she is really thinking and doing remains a mystery though.

Kyubey is a magical agent who can fulfill any young girl’s dream.

Madoka Kaname is an extremely ordinary eighth grader. She has the gentle personality that always cares for her friends. She is a girl who slightly lacks confidence in herself.

Mami Tomoe is a ninth-grader who attends the same middle school as Madoka and her friends. She takes care of them like a nice big sister. She is also a working magical girl who has signed a contract with Kyubey.

Sayaka Miki is Madoka’s classmate. She is lively and always seems vigorous; she is a very close friend to Madoka.

Kyoko Sakura is a magical girl who came from another town, going after Mami's turf after hearing of her death. She is always eating stuff. She is an egoist who doesn't take heed of the damage to the people around her.