Epilogue: After this and that[edit]

The duty of a student is not battling a mysterious organization. Of course, studies come first.

After that. Two days have passed since that incident.

As Seiran Academy started its lessons once again, little by little we retrieved our original lifestyle. I can only say this now, but it's not bad to occasionally receive boring lessons.

Is this enjoying a peaceful lifestyle? After being put through such a dramatic experience, I feel it made me start to understand what the really important things are.

Now, the school building was half destroyed when Zonmi and Kyouko ran amok, but surprisingly there wasn't any retaliation for it after that.

Probably the IMA — or rather Luka-san, arranged something in secret.

If it's like that, it seems I have something to object to about the quality of Seiran Academy regarding its pupils.

Seems like there's no one who would demand the expulsion of two pretty girls. Since if there was someone, the ratio of male students would end up being excessive.

I visited the office of the International Monster Association.

"Sorry I called you all of a sudden. I wanted to talk to you tête-à-tête asap."

"No problem. I also wanted to talk to you."

Today marks the Nth[1] time that Luka-san makes one of her incomprehensible jokes.

As usual, this person is being elusive and aloof.

"Let's put the jokes away. Even so, it's amazing~, you alone caught one of those 'Black Tamer''s guys~"

"That was not my power, but the power of those three."

Am I over-thinking it? It seemed like, for a moment, Luka-san's expression was clouded by a tinge of sorrow.

"Say, would you believe me if I told you something?"

"Actually, that those three monsters gathered around you~, it wasn't an accident~ it was all planned by me~. This capable Luka, noticing your talent beforehand, felt that it was a waste that those superior monsters were left over, so she had the sudden impulse of calling them together all at once~."

The moment I go along with her, I end up taking it as true.

"Well, they are ready, the documents."

"Thank you very much."

What Luka-san handed me were the documents needed to become an official monster tamer — I had contacted her beforehand and asked her to get them ready.

This... is what draws the line.

From now on, I'll hold onto those three girls... That's the embodiment of my resolution.

"At any rate, you've grown; I don't recognize you, Chiharu-kun."

"Yeah. Frankly, when I first met you I thought you were but a good-for-nothing. Because... You know? The you that time was still hesitant about becoming a tamer."

"In fact, what has gotten into you? To willingly become a tamer~"

"It's easy. I want to protect and bring happiness to those girls I met."

"... Everyone. Zonmi, and Kyouko and Iris, I want all of the people involved in this incident to become happy... And, while I'm at it, Manami too."

Wavering for a moment on saying it, I finally added the existence of my little sister.

I was unwilling, but... If it weren't for her, right now maybe I'd still be trapped at Iris's den.

"Oh! Here comes the harem proclamation. You did it! Undress☆useless main character!"

"What kind of main character am I!?"

Sometimes it was difficult to tell the true meaning behind Luka-san's words.

"You are able to defend yourself by yourself!"

I don't know if she was acting or what, but Luka-san looked like she was pouting.

Practical question, a little something I learned with my experience as a tamer.

This person... For reaaal!

That is, she's called first in the list to become the next Maou.

I don't know if she hides some sort of magic power... If I continue as a tamer, will the day come that I'll surpass her?

Once I returned, when I opened my home's door,

All of a sudden, the loud sound of poppers resounded.

In no time, my sister jumped at my chest.

"They aren't touching you, I'm pressing them."

I've somehow or other heard a line taken from a manga.

"... You guys, are you really blood-related siblings? In spite of that, isn't this somehow indecent?"

"No problem, since the indecent one is only Manami! rather, whoa?..."

The me who has returned home was greeted by an unexpectedly unbelievable scene.

... Perhaps, maybe this is the first time I met all of them at the same time.

The ones that greeted me poppers in hand were the ones at the center of this series of incidents, the monster girls. Zonmi, Kyouko and Iris.

As the three rivals thus gave signs of spending their days peacefully, that would be a touching scene worthy of seeing...

The one who spoiled everything was that fool of my sister.

"Hey! Stop clinging to me by entwining your legs around my body!"

Iris and Zonmi, to us siblings that were so unashamedly clingy, sent scornful gazes.

"Humph. As expected, humans are foolish beings. To think I had started to get a better opinion of them."

"... How unusual, agreeing with a red dragon. Getting seduced by women's bodies, becoming the Maou is but a pipe dream."

My value seems to have crashed to the level of Greece's national debt.

My sister clung firmly to my body like a koala climbing a tree and let out an evil smile that could only mean 'Just like I planned...!'.

Could this girl possibly... Have done this on purpose?...

Somehow freeing myself from my sister's restriction, I finally could speak out that doubt.

As Kyouko heard it she wonderfully stuck out her chest,

I see, in other words, this is a surprise party?

And, there's still something that doesn't make sense.

"Then, who was the one who suggested it?"

From the way those three looked each other without even a word, I could naturally deduce the answer.

"... A-as for me I don't mind who was, but, you see, I think it would be unnatural not to since this is of course a custom of the Netherworld."

I see. It seems it was Zonmi's suggestion, who was more fired up than normal and looked like she was wearing make-up. What's more, she was wearing an excessively gaudy dress bought who-knows-where...

On second thought, we were both wearing matching contract rings.

Somehow or other, this looked like a wedding... It was a little embarrassing.

"Come on, come in quickly. Since we even have expressly ordered a cake for you two."

Kicking off my shoes, I strode though the entryway's threshold.

My gait felt somewhat lighter than usual, could it be my imagination?

I think I'll talk about what will happen hereafter.

As a newbie tamer, right now I only have one ring assigned, but it seems that when I'm recognized for achievements, if I request to the IMA, from now on I can increase the number.

It seems that in no time, Zonmi, Kyouko, Iris — the day I can contract all three monsters at the same time is not far off.

By the way, additionally.

Luka-san's declaration of going on vacation was utter bullshit, it was instead an excuse for me to go here and there with Zonmi and Kyouko. Could all that unexpectedly be simply a plot of Luka-san whose natural gift was being chaotic?

Good grief, I'm really no match for that person.

"Eeh, why am I made to do this host impersonation?... I'm sincerely reluctant, but... People, let's all have a toast. Ah, Manami-chan stop nonchalantly adding something weird to your brother's glass."

"Tch. That's Kyouko-oneechan for you."

"What are you coming up with this time, you!?"

"Well then, for the plans for my contract with Haru—" "For my marriage with onii-chan—" "For the day my vengeance comes true—"

"Aren't you doing too much as you please, you lot!?"

The person in question, Zonmi, seems like she still hasn't poured her drink.

Of course, as fellow monsters (though Manami is not a monster...), could it be that she's thinking about us all making a contract soon?

Saying this is embarrassing, but... somehow I don't hate this kind of atmosphere of freedom.

All of them are laughing.

There wasn't even a speck that remained of their former battling from day to day.

All of them were energetically doing as they pleased.

And I... That I wanted to protect those smiles of them forever, that was what I wished from my heart.

That one, seems like she has taken quite the shock...

From now on, if I keep being a monster tamer, it seems I'll keep facing big hurdles. Maybe I'll experience unexpected frustration.

For these girls, I feel I can overcome no matter... 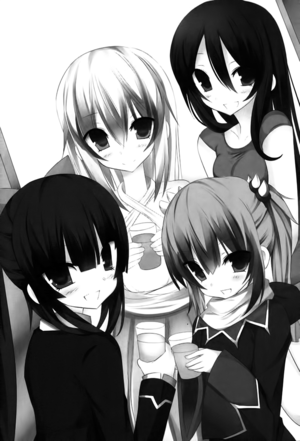 Together with a sound like escaping air, Zonmi gave a little shriek.

"... Fu, fu, fu. Little sister, today of all days, I won't let it pass. How about I push you before a stray dog stark naked and in tortoise-shell bondage?"

I feel I can overcome any difficulties, but it may be only my imagination.