Chapter 1: To the land of the ghoul clan[edit]

While we were eating breakfast at the hotel we’re lodging in, everyone on their own, I apologized with a serious tone about the thing yesterday.

“… Really, have you reflected?”

I was at a loss of words before the unexpected retort.

All I could think of was, as expected… Because I had broken my promise with Zonmi of hearing what she had to discuss with me?

It’s not like I intended to dishonor my promise with Zonmi.

“It doesn’t matter. I forgive you. Yesterday I acted a bit childish too.”

“Yeah. However, you must do me a favor instead.”

“Yes. Chiharu, before… Didn’t you talk about going to the Land of Ghouls?”

“Yup. Now that you mention it, I did say that.”

In the end, it was rejected on the basis that it was too dangerous to leave the island we’re staying in (that seems to be called the Grandeel archipelago).

“Now that we have decided to stay at the Netherworld for a long time, there’s no reason to stay on this island. It’s the perfect chance. Why don’t you come with me, the two of us, to the Land of Ghouls?”

In reaction to the words ‘the two of us’, the other girls, stopping the hands they were eating with, gathered their cold glares on me. 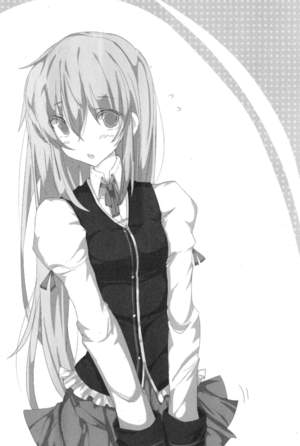 “To tell the truth, Yesterday I received a letter from my parents and… As I’ve come back all the way to the Netherworld, they must have want you to be introduced to them, Chiharu.”

That is, if I were Zonmi’s parents, I’d be interested in what kind of human my daughter has made a contract with.

“Not that I mind, but… Wasn’t it dangerous to leave the island?”

“If it’s for that, don’t worry, it’s fine. The situation is now different from before… Isn’t it, Lilith?”

As if they had a previous agreement, Zonmi brought the matter up to Lilith-san.

“Yes. Regrettably, since the event of the Black Tamer’s attack the other day, this island has been left without enough remaining power to endure further terrorist actions. Rather, it may be more dangerous right now to stay at the island.”

That means there’s no reason to stay in this island.

“In that case… Why don’t we go? I’m interested in what kind of place Zonmi’s hometown is.”

If that cheers Zonmi up, for me it’s killing two birds with one stone.

When I answered, Zonmi put on a smile like a flower in bloom.

However, contrasting with the joyful Zonmi that was like a kid inside a candy shop, the other girls had sulking faces.

“Muu. Zonmi and oniichan going together to see her parents[2]? I absolutely won’t allow such a thing! It’s obvious she’s looking for her parents approval! If you say you have no choice, bring Manami and the rest along!”

“Ah! If it’s like that, count me in! I think that in order to protect Haru, the more fighting forces, the better…”

Hearing those two’s claims, Zonmi stiffened her face as if she had tried to drink something awful.

“? Could it be that Zonmi-sama had planned to go just with Chiharu-sama to meet her parents[3]?”

“For that reason… Having been entrusted with Chiharu-sama’s safety, it’s not like we can approve of you two’s outing. Since certainly, though staying in this island bears a high risk to us, allowing you two to go alone is far more dangerous.”

“On the other hand, carrying a crowd of escorts is out of the question.

Since, leaving us without enough defenses for a crisis, if the populace got wind of it, there’s a chance we may fall into danger instead. Here, a little group of elites… That’s right, to be specific, Chiharu-sama, Zonmi-sama, Kyouko-sama, Iris-sama, Manami-sama… And myself, what about the six of us to go on the trip?”

“Wa-wait a minute, please! Let alone the other five, we will be bringing the little sister with us? There’s no reason to bring her along, being a human!”

“If we force her apart from Chiharu-sama… The result will be scary. Since the one who can stop a rampaging Manami-sama… It’s Chiharu-sama alone…”

For starters, in Manami’s case, even if you told her not to come, she would absolutely tag along.

I can easily picture my sister hidden inside a suitcase holding her breath.

“So, does that mean we too can accompany them?”

“Yes, of course. Please lend us your strength without fail in order to protect Chiharu-sama.”

“… I too was just blasé[4] of beholding this island’s scenery. ‘Twould not be ill to change dwellings… Perhaps?”

What do you want, well, I had the slight expectation it would turn like this midway.

Despite going back to Zonmi’s hometown being an important event, this time too it’s still comes to the usual gang going.

“Uuu… Why… Each and every time nothing goes well?”

Seeing Zonmi murmuring bitterly, casting her glance down to her feet, I once again tilted my head in puzzlement.

On board the high-speed ferry that Lilith-san had rented, we were aiming to arrive at the Land of the Ghouls, which was about a day’s distance from the island we parted from.

Be that as it may… This is an expensive-looking boat.

Being designed with speed in mind, it was not much in terms of size, but even so, apart from individual cabins for us six, it was equipped with various entertainment facilities… The demons' assets seem bottomless.

That ship, sparkling clean from the front down to the deck, it’s just suitable to be the image of a luxury liner.

“A pleasant breeze is this, monster tamer.”

I’m currently sitting on a bench installed at the ship's open-air terrace.

Till here, all good.

The problem is, the girl before me… Iris is sitting sideways on my lap while naturally hugging me.

From an outsider’s point of view, seemingly getting all cozy with a girl that can be mistaken with an elementary schooler due to her size, I must look like a degenerate.

Firstly, as to why won’t Iris leave from my side, that’s all due to the sorrowful circumstances she has.

Iris, as the sole survivor of the red dragon clan, has lived until now to take revenge on the Black Tamers, but ever since the contract with me, her ideas seem to have changed a little.

Though I’m glad that she has changed… The next objective she’s set for herself is, so to once again revive her bloodline, to make children.

To make thing worse, as she’s led up till now a solitary life, her sex ed seems to be severely lacking and she believes that if she spends all day next to me, a child will be made.

For that reason… Not fearing men, this should be why she could act unguarded before the opposite sex up till now.

Until now, being considerate with her complex situation, I didn’t point out her misunderstanding, but if I let it keep like this, it would mean letting her once again harbor groundless mistakes.

Personally, it’s not like I’m enthusiastic about it, but… I can’t afford the luxury.

There’s no way around.

Should I… Ask her?

Like this, abiding my shame, I resolved to go to my sister’s cabin.

“Eh? You want me to teach proper sex ed to Iris-chan?”

“Fufun. Isn’t it unusual for oniichan to rely on Manami♪ Good! Leave it to Manami♪”

Unfastening one button on her blouse, Manami took a pose that pointlessly highlighted her cleavage.

“If you leave it to me, even the most innocent virgin will pick up a top-notch technique♪”

“How do I say it… Please do show some moderation.”

Honestly, even I can’t help but feel a bad premonition about leaving it to Manami, but the sad thing is that there’s no one more suited to this task than her.

“… Ye two. What the blazes have ye been conversing about since a while ago?”

Before us siblings who were engaged in a secret talk, Iris knitted her brows.

“Iris. What Manami will teach you from now on, how do I put it… It may give you many shocks, but… Keep your cool.”

“Laughable. The likes of a human, teaching something to a proud red dragon, with a history of ten thousand years, that’s preposterous.”

“Iris-chan will come with me like a good child. If you keep clinging to oniichan like that, won’t I end up slicing you in three?”

Making the blade inside her jacket’s sleeve sparkle shiny, Manami said something outrageous.

Forcefully convinced by my sister, being parted from me made Iris frankly displeased.

Manami took out some glasses from the desk’s drawer and put them on.

By the way, as Manami usually wears contacts, she shouldn’t need glasses, but… I’d say it’s her way of creating the mood.

Sitting on the bed, Manami, pointlessly crossing her legs,

Without beating around the bush, she blurted a word that sounded as if you had mistaken the channel broadcasting code[6].

It’s a word that, not even by mistake, a middle school girl could say as if nothing as naturally as breathing.

Iris was left for a moment with a face that seemed to say “there’s something I don’t understand”, but soon, her cheeks tinged deep red to a level befitting of her title as a red dragon,

“Wha, whawha. Thou… What dost thou blurt so of a sudden!?”

“Dostn’t take me for a fool! I know that much. It’d be something… Related to men?”

“Haha! What dost thou daydream of? There’s no way that thing would go in there…”

“So they say. At first, I couldn’t believe it, you know? Well, why don’t we watch first this movie I have in my cell?”

It’s not like I’ve made a mistake. I shouldn’t have…

Seeing Iris grow pale and make a face that just said “it’s the end of the world” as she watched my sister’s cell phone movie, I felt a sting in my chest.

What’s this!? This… Infinitely wicked ritual! M-me and the monster tamer… Things like this…”

Iris, having gained proper sex ed, as originally planned kept a proper sense of distance from me.

Inside my mind, my feelings grew quite complex.