Have we been living at the Netherworld for around two weeks now?

After being safely discharged from the hospital I was referred to by Lilith-san, I returned to my life without further issues.

Once again, I’m surprised by the recent changes in my circumstances.

Specifically… Getting the mysterious job of monster tamer and discovering my true identity as a halfbreed between human and monster.

I miss the time when I considered myself to be a highly ordinary high school student.

My ability to adapt to the changes in my circumstances I’ve gone through is the reason I managed to splendidly grow as a person.

Recently, I’ve experienced some changes I have not yet grown accustomed to.

Currently, there’s a pretty girl lying besides me in her nightgown cutely snoring on my bed.

The red dragon girl I made a pact with just the other day who, how should I put it… Seems to be under several serious misunderstandings.

To be specific, Iris seems to think that I proposed to her.

Speaking of that, it’s true that I thoughtlessly put on the contract ring I received from Iris, but… In truth, it doubled as an engagement ring handed down in the red dragon bloodline.

The anti-sister measure that I set up before going to bed of blocking the door should be flawless, but… As, somehow, when I open my eyes each morning Iris is sleeping besides me, I’m bothered to a very great extent.

Iris greeted me while rubbing her sleepy eyes.

I kept myself from saying that, which I felt I wanted to say.

… Speaking of the obvious.

It seems that my libido, when I have a girl calmly lying besides me defenselessly sleeping, doesn’t wither out.

—Even if said girl is close to 30 centimeters[1] shorter than me.

As I was amazed by the scope of my own strike zone.

“Chiharu. Are you awake?”

A ringing voice like a wind chime moved by the night breeze.

The one who’s come to my room early in the morning is the girl from the ghoul clan that I’ve made my very first contract with.

I opened the entryway door and greeted.

“Have a good morning. Erm… Doesn’t it bother you that I’ve come so early in the morning?”

“Of course not. What do you need?”

“I-it’s not that I need something, but… I have to discuss a little something with you.”

How weird that Zonmi has something to discuss with me.

Saying that, Zonmi handed me a cutely wrapped translucent parcel.

Such a surprising response that it left me befuddled.

Alas, since I have no experience with it, I don’t know, but handmade cookies… Aren’t they given by lovers to their crush?

When I asked with a doubtful gaze, Zonmi, exaggeratedly shaking her head,

“Yep. The truth is, I… Since long ago, my hobby was baking pastries and, since the succubus said she’d lend me the kitchen, I tried making some for the first time in a long while. So then… Since I made too many by chance, I decided to share them with Chiharu…”

Her hobby is pastry-making… Zonmi has unexpectedly ladylike hobbies.

“So… You may think of me as an unbecoming woman for this, but… Better than keep standing here talking, if you please, won’t you let me enter your room, Chiharu? Since, to me, pastries go better with black tea.”

“Understood. It’s a bit messy, but don’t mind it.”

Taking off her outdoor shoes at the entrance[2], Zonmi,

“How glad. Somehow, recently… Many things kept popping up and we didn’t have the chance to speak alone together.”

“Mm, did you say something?”

“Is that so? If I’m not mistaken… Since Iris too likes sweet things, I think this will make her happy.”

“Being told that makes me happy more than… Wait, why has the name of the red dragon come out there?!”

So, I realized I’d made an error I couldn’t take back.

There’s no need to say that, right now, inside my bed there’s Iris in a nightgown… A third party, not knowing the circumstances will, without fail, get the wrong impression of the situation.

“… No, as expected, my room is too messy, I can’t go letting people come in in this state—”

“Nu. Somewhat… Boisterous. Monster tamer, who the heck art thou speaking with like such?”

Despite not having switched on the cooler, I felt an intensely cold breeze coming from inside the room.

Seeing Iris loitering in my room in a nightgown, Zonmi’s face grew pale.

Right after that, her countenance changed into one of anger, and in the end she entered ghoul mode, her eyes like those of a dead fish.

Thinking about it, it’s been a long time since I last saw it.

“… Ki-kidnapping and confining a little girl.”

“Erm… Zonmi-san? This is not what it seems.”

“Hoho! Denying the evidence this late in the game?

Fine. I’m seething with interest of what kind of excuses you yourself will come up with against this. Chiharu… What the heck is this?… Why don’t you give me a proper explanation?”

“Understood. The reason for Iris being in my room… That’s, of course—“ 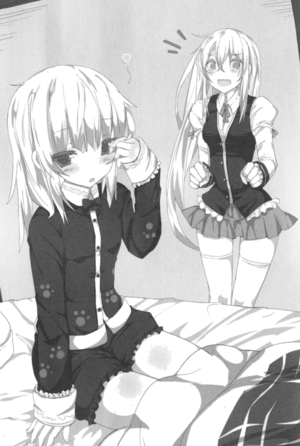 Hearing Iris butt in with quite the outrageous reply, I spat out without time to raise an objection.

“… Humph! Why are thy cheeks red, ghoul woman? It’s just a young couple sleeping together before wedlock. Is it so surprising?”

For some reason, Iris smiled brimming with self-confidence.

Of course, there’s no way the Iris has consummated the deed with me.

“Zonmi. I think that you understand, but don’t mind what Iris has said.”

However, my warning in vain, it seems that none of my words have entered Zonmi’s ears.

Zonmi held the umbrella she produced from who knows where and had already entered into attack motion.

Just when I had resigned myself and shut my eyes.

“Hey! Why is the zombie at oniichan’s room!?”

Suddenly, a familiar voice echoed inside the room.

Looking to the source of the voice, isn’t there someone slowly crawling out from under the bed?

Quite unfortunately, the one who appeared from under my bed was unmistakably my sister—Kusumi Manami.

What more, I don’t know if for the lulz or for what, but my sister, for some reason, was wearing my pants on her head.

“Oniichan. What the heck is this!? Why is the zombie at oniichan’s room!? This is really suspicious!”

“Don’t those words go right back at you?”

“Erm… Chiharu? We haven’t yet finished with our ta…”

“Moreover, what’s with that appearance… Why are you wearing on purpose my pants on top of your head?”

“no. Just crawling from under the bed normally didn’t have enough impact, so…”

“For who are you concerned with!?”

Just my blood-related sister coming from under my bed, I think that has more than enough impact.

“Fua… ‘grief. Being noisy since early in the morning. Haven’t you woken me up because of that?”

She who was stifling a yawn as if she had been sleeping till just right now, was my childhood friend, Kurose Kyouko.

From the giant tribe—a Nephilim girl.

Kyouko, gasping as though her drowsiness had flown away just by looking around her, opened her eyes.

“Why are you all gathered at Haru's room!?

Moreover... Why is Manami-chan wearing pants over her head!?”

“… Sorry. I myself can’t understand that too.”

That is, anyone who suddenly got in to this situation would hold that doubt.

“In any case, Manami-chan, start by fixing your appearance! Girls can’t go around showing that kind of simply… Improper appearance!”

“That sentence… I don’t want to be told that by Kyouko-oneechan alone.”

Rightfully said by Manami with a cold glare.

This time alone, I’m with my sister’s words.

It was when Kyouko, in a openly sullen mood, approached Manami.

If this cannot be called a miracle, what can be?

Right after Kyouko set foot inside my room.

The belt of Kyouko’s yukata[5] got caught in the doorknob.

If that was all, it would’ve been fine, but… Kyouko, having become emotional, didn’t notice that the belt of her yuakata had been caught in the knob.

By the time she noticed that sound, Kyouko was already in her undies.

What the heck is with this girl… How many time has she got to show me her panties to become satisfied?

Well… I don’t dislike it, though.

By the way, in addition to that, today Kyouko’s panties are quality goods of black laced cloth so thin that her skin can be seen through it.

I reflexively stared fixedly at Kyouko’s panties so as to evaluate them.

If I had to say if they suited her or they didn’t, these clearly fall into the category of panties that don’t suit her.

I believe it’s 3 years too early for Kyouko.

However, what I must say is not if they suit her or not, that isn’t really a particularly pressing matter here.

Why the heck has Kyouko chosen to wear adult panties that don’t go well with her figure?

I’d say… This is but my own guess.

Compared with the girls around me (except Iris), it can’t be said that Kyouko’s body development gives out a womanly feeling even as flattery.

For that reason… She may have wanted to fill the gap with them by wearing adult-like panties.

The brave sight of my childhood friend making an effort to overcome the complex with her body touched deeply my heartstrings.

As though straight out from a waka[6] made by a great writer from the Heian era[7], interpreting from that period’s background—About my mania[8], it’s not panties themselves, but “Girls, why do they go with that choice on panties?”, it’s that interpretation what makes me feel the moe[9].

“Wh-what are you staring aaaat!”

Sure enough, she hit me with her whole strength (rest omitted).

Good grief, with all of this, it’s a chaos.

Accomplishing the goals of becoming a monster tamer and making contracts with all three monsters is a good thing, but the bustling situations around me have increased more than ever.

How do I put it, what the heck have I done?

“Monster tamer. This is a bit excessively boisterous… Why dost thou not come with me to fetch something to break the fast?”

“Fine. Now that you mention it, I’m starving. I haven’t eaten anything since morning……… Eh?”

So, at that time I noticed something important.

Since my sister crawled out from under the bed and right after that many things occurred, I had forgotten until just now, but… Now that I think, I had invited Zonmi to my room because she wanted to discuss something with me.

It’s not that she hasn’t heard my words, more like she was ignoring them as she heard them.

“I just… Just wanted to take care of Chiharu…”

Zonmi, after muttering something, pursing tightly her lips and clenching her fist with all her might,

After shouting, with teary eyes, she left the room.

And, at the same time, something soft hit my forehead.

Grabbing it and looking at it… It was a portion of cookies inside a vinyl bag.

However, she may have crushed them with her palm after becoming emotional.

The cookies inside the bag closed with a lovely ribbon were thoroughly crumbled.

Looking at them on my hand, I felt an unspeakable feeling of guilt.