Chapter 1: The secret of the Kusumi household[edit]

Let’s start from the results.

He who once brought the human world’s culture to the Netherworld, regarded by many as a human lover, the 47th Maou—Cruel.

It seems that my dad was the one once addressed as the Netherworld’s Maou.

How should I feel being suddenly told that?

However, the Limiters that usually manifested until now when I was in a pinch.

Those could be said to totally overwhelm just about any other monsters.

In other words… Sadly, this overwhelming power of mine, if we assume it was inherited from the former maou, so as far as it goes it would be logical even if I had manifested an incredible power.

“… Did Lilith-san know about this?”

Was that right after we arrived to the Netherworld?

Lilith-san took me once to the study used by the former maou.

The portrait of the maou I saw at that time.

If I think of it now, the character in that picture could have been my real father.

This isn’t anything but my own guess.

Lilith-san… Perhaps, she invited me to that room knowing I was the child of the maou.

“I beg your pardon.

I thought you should be told at some time, but… In the end I had doubts about if you should hear it from my mouth.”

However, this settled it.

It’s not like I doubt mom’s words, but having it confirmed by Lilith-san, who’s a Demon too, increased the persuasiveness.

As I thought, it unmistakably seems that my dad was the maou that once ruled over the Netherworld.

“I-I can’t believe it. That Haru’s dad was the maou of the Netherworld…”

The one left most open-mouthed by this fact was my childhood friend Kyouko.

It may be… Maybe learning that I’m the child of the maou, to Kyouko is terribly shocking.

If you learn that the lineage of the childhood friend you’ve been attached to for so many long years is so unique, anyone would suffer a shock.

My astonishment from when I learned that Kyouko was in reality a Nephilim from the giant tribe could be said without a doubt to be one of the top five surprises of my life.

“… J-just if. If I manage to get engaged with Haru, from tomorrow on I would be filthy rich!?”

“Give me back my concern!?”

I envy that pointlessly positive mentality of yours.

“Kyouko-sama. Regrettably, I think that that idea is too hasty.”

“Chiharu-sama’s father. Maou Cruel was known to be a big lecher, and the number of heirs he left exceeds 20.

In other words… Who, with the unclear situation of Cruel-sama’s inheritance, would take the risk of marrying Chiharu-sama for money and social status?”

“You too, Lilith-san… Could you not say cruel things nonchalantly?”

Each and every one of them takes me… As an ATM machine installed on a seven-eleven.

“Oi. Manami. Stop looking at me with that outspoken glance that says ‘Haah… Twenty babieees? If oniichan had such a sex drive Manami too would by now have made blankety-blank[1] with oniichan’! No matter how much of a sex drive I have, how would I cross the line with you!?”

“A-amazing! Oniichan! Manami hasn’t said a word yet and you’ve said by yourself the foolishness and the retort!?

Moreover, how come you knew word by word without a mistake what Manami was thinking!? Are you an esper!?”

So you were thinking it?

But I didn’t expect getting it right word by word.

Contrasting with the varied reactions of Kyouko and Manami (the human world team) before the fact of me being the maou’s child, Zonmi and Iris’s (the Netherworld team) response was of utter calmness.

“Zonmi, doesn’t it surprise you? That my father was the maou.”

“… Yes. Of course I’m surprised. However, would it be because I too was born into the royalty? I don’t know if we can say that’s why, but I think that the feeling of something special when meeting other royals is thinner (not as big of a deal?) than with the little sister and the rest.”

“Besides… To tell you the truth, I had a vague hunch about who was Chiharu’s father.”

“… Yeah. The adulterous tendencies of the former maou are somewhat well-known at the Netherworld, and the appearance of your limiter played a major part.

It even may be that your adulterous tendencies have been inherited from the former maou at a genetic level… That was what I have been thinking for a while.”

The eyes of Zonmi, who matter-of-factly stated this, didn’t hold a glimpse of a smile.

Since prying down further was likely to wake up sleeping dogs[2], as if running away I brought up the topic to Iris.

“… Iris too doesn’t look surprised… Could it be, you had also noticed?”

“Indeed… That’s what I’d like to say, but grievously thy inkling is off.”

“? You don’t look very surprised, though.”

“… Humph! From the beginning I wasn’t interested in the least by thy upbringing.”

Iris, letting out a fearless laughter, said that and tightly grabbed my hand.

“Monster tamer. The subject of my interest is none other than thou thyself.

After all is said and done, thou art bound with me by an eternal pledge… The man who shall become my lifelong partner.”

It only came out to light recently, but Iris is 12 years old.

Thought Iris has been told before about the marriageable age according to the human world laws… The person herself doesn’t seem to care about such a thing.

Since when we were traveling through the Netherworld, we all have heard those words many a time, we weren’t especially surprised, but… Mom was taken aback by that speech.

With her teeth clattering, mom’s face was of utter despair.

The one who took action then as if to beat the dead body was Zonmi.

“Mother. I have something to say about that.”

“To tell the truth, I, like that red dragon over there, am betrothed to Chiharu. To add things to that, my family has already completely agreed to my marriage with Chiharu. About Chiharu… I think that he’s not so against marrying me.

So then, mother! Please, will you acknowledge my marriage with Chiharu?”

Mom, receiving Zonmi’s speech, ended up with a face that looked like a photo version of Munch’s “The Scream”[5].

“Erm… Kanae-san. There’s one thing I too want to consult with you…”

And, the one who acted then like throwing a Tomahawk[6] on the dead body was my childhood friend Kyouko.

“D-don’t make a mistake! I’ll tell you from the start that it’s not like I hold romantic feelings for Chiharu-kun[7]"

“Haah… You’ve grown into quite the classical type of character[8], haven’t you, Kyouko-chan…”

“But… Err… If the other two have proposed marriage and only I don’t, don’t you think it’s unbalanced? So, I want you to also acknowledge my marriage with Chiharu-kun…”

I think it’s very meaningful in a sense for Kyouko to base one of the most important events of one’s life like a proposal with the preposterous reason of “since I feel that it’s unbalanced”.

Mom, receiving Kyouko’s speech, had her face pale like a zombie’s and went to the living-room’s bookshelf with an unsteady gait.

It’s natural that mom has received such a shock.

Not only has her own son received a proposal by a monster girl, which is already a shocking development, it happened thrice in a row.

In the end, mom took all of the books on the shelf out and scattered them on the table.

On the cover of one of the books carelessly scattered on the table, ‘Haru-kun’s growth record, part 1’ was written with a black pen.

And, it was covered full with photos of me since birth (about a year?).

“Nuu… W-what’s with this obscenity!?”

Though it’s only natural, among the photos of the newly born me there were photos of me naked mixed in.

Though it was from when I was around a year old, it’s embarrassing that others see you naked.

“… If I’m not wrong, it was around here. Fufufu. I was right leaving it here for such a thing.”

Along with those meaningful words, mom produced a piece of paper from inside the album.

I, kusumi chiharu, when I grow up I will marry mommy.

A sentence written in a round, childish calligraphy.

“Erm… Mom. What the heck…? I don’t have any recollection of that.”

“Isn’t that natural? This is from before you entered kindergarten, Haru-kun… Specifically, I made you write this while I was teaching you the letters.”

“Of course! I feared that this day would come.

Having my dearest son taken from me by a thieving cat[9] from who-knows-where… I absolutely won’t allow it!”

“Erm… Surely your joking? It’s scary that you even nonchalantly made the by then still a child me to put my fingerprint on it to make it look official.”

“Don’t you understand? The only one with the right to marry you is me, your own mother!”

*BLAM* Mom hit the table and made a fervent speech.

What the heck is this person saying.

Why don’t we put in order this situation for now?

If a little while back I thought I was engaged in marriage to monster girls, now even my own mother has proposed to me.

It still doesn’t make sense to me?

It’s so disgusting that even a snail would run away on two feet sensing the danger[10].

And, the one who suddenly came out with that shout was my sister, Manami.

I was at fault. Please spare me.

No more, I’ve had enough of this.

I’m as fed up as if I had put mayo over seabura tonkotsu ramen[11].

“If we go with that theory, the only one who has the right to marry oniichan is his own blood-related sister, Manami! Oniichan! Look!”

Saying that, Manami held out a document that, sure enough, has that written.

“Hold your horses. Manami. This sentence, it looks like it was written recently, but… How come I don’t remember it in the least!?”

I mean, knowing that this document would come handy one day, Manami, by herself, wrote it in a handwriting resembling oniichan’s!”

“Isn’t that totally no good!?”

Rather, you two, how come you have that self-satisfied look while flaunting those documents without any legal binding whatsoever!?

“… Hey. You two, could you let me see those documents for a bit?”

“Haru-kun. Mom is glad! Have you decided at last to marry mom?”

“Oniichan. Manami’s glad! Have you decided at last to marry your sister?”

With a smile, as I received the documents from the two,

These are perfect enraptured faces.

Seeing my sister and my mother hopping throughout the living room with an expression of pure bliss made me feel extremely mixed feelings.

“Why is it. I… Though I love Chiharu… Thinking about becoming family with those two has made me seriously reconsider the marriage.”

Contrasting with the confusing situation of adding chaos into the chaos, Zonmi’s cool-headed retorting words left quite the impression.

“… How do I put it, I think it’s weird to ask this at this point in time, but, mom, why have you come back so suddenly?”

“Eh? Didn’t they tell you? Haven’t you heard that a monster tamer tasked with your protection would be coming soon? To tell you the truth, that guardian monster tamer was me!”

Certainly, if we go by mom’s true power, it’s understandable that she has been bestowed with the important task (?) of protecting me.

In a good mood, mom pinched my cheeks.

However… What’s with this uneasy feeling?

In the end, perhaps I long to return back to a normal household…

If I keep thinking about it, I’ll feel like I’ve lost, so I’ll stop thinking.

“… Well. Though it’s not like that’s the sole reason I came.” 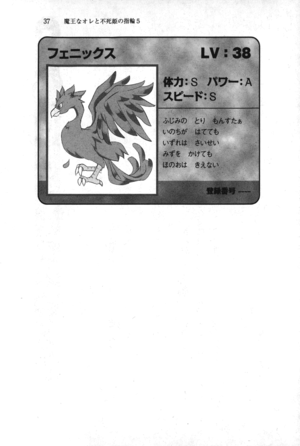