When there was just a week left of summer vacation.

Our long trip through the Netherworld finished…. And we returned at last to the human world.

Properly speaking, despite the fact that it wouldn’t be weird that our spirits reached the max in an instant, facing reality, I honestly wasn’t happy.

Let’s try bringing up one of the causes.

Right now, in my home… Zonmi, Kyouko, Iris, and Lilith-san, those four beauties were staying here.

Why are they living at my house as if it was just natural?… I truly can't make heads or tails out of it.

Leaving Zonmi aside, who was originally already freeloading, about the other three it's truly a mystery.

When I tried asking each one for their reasons…

‘… Dostn’t forget. Monster tamer. Art not thou the one who, not long after now, shall become my spouse? Is it so farfetched for two people that shall soon exchange vows to live together?’

‘Chiharu-sama. Have you forgotten your position? Aren’t you someone important, and able (capable) to influence the destiny of the world from now on? What do you intend to do if there’s no one to guard you?’

‘M-me staying here doesn’t have any weird meaning, OK? Just, I mean… Isn't everyone staying at your house, Haru? So… If I’m the only one who doesn’t stay here, won’t the balance crumble…?’

Hearing each one making their own excuse, I got this kind of feeling.

So many people packed into the usually noisy Kusumi residence.

Somehow… I thought that our boisterous days would continue, but things didn’t go by so easy.

The reason was that the one who until now was the noisiest, Manami… Had become very depressed from Zonmi’s confession.

Ever since we came back, my sister Manami had completely holed herself in her room.

By the way, ↑ happens to be the second of the causes of me being in low spirits.

Since my sister wouldn't recover her usual mood, I can’t be honestly happy for returning to the human world.

Today once again, I… Though I knocked on my sister’s room, as usual there was no reply from her.

When this morning, like always, I had left the breakfast before my sister’s room’s door.

In fact, it has been three years… I met with that person once again.

Suddenly, my home’s windows' glasses shatter and a woman comes from the outside.

The house… The house’s on fire!?

The reason may be the bird monster with a body of flames that woman is riding.

In the game world… This guy is what they call an Immortal bird[1], isn’t it?

That monster, among the ones I’ve encountered up till now, seemed to possess a magic power of the highest class.

“Hey, hey. What do you say when you meet with someone, Haru-kun?”

The heck… Am I dreaming?

If there was a third person… They wouldn’t believe that this woman was, rounding it to the tens, about forty.

This more than 170 centimeters tall[2] woman boasting a bust size that doesn’t lose to her daughter Manami.

No matter how you look at her, she just seems to be in her early twenties, a 36 years old (divorced once) with a youthful sex appeal.

The one who suddenly appeared before me was my true blood-related mother.

“But, hey… The house! The house’s on fire! Strictly speaking , isn’t there still loan to pay!?”

“Whaaat. That? Haru-kun, you’re a worrywart like always. Tei!”

Right after mom snapped her fingers.

My house, which until now was engulfed in flames, returned to how it was in an instant.

“My Torippee is a monster that rules over death and rebirth. It would mostly be that he can return anything to how it was?”

Or perhaps, is Torippee the name of that Immortal bird?

Being that I’ve a contract with Zonmi, it’s not like I’m one to talk, but I feel that no matter how cool the monster is, the name makes everything come to naught.

“Well, but he couldn’t revert my relationship with that man to how it was…”

Mom muttered while looking into the distance.

As it came from my divorced mom, it wass an awfully crude line.

“You there… Why couldn’t you come back normally!?”

“… No, if I had just entered normally from the front door, it wouldn’t have had any impact.”

“Who are you concerned for!?”

Am I over thinking?

I’m sure I’ve made the same retort before.

Feeling a bad premonition, I, step by step, walked backwards so as to distance myself from mom.

Mom, so that I didn’t escape, advanced matching my movements.

A bad feeling made me sweat all over my body.

To be frank, speaking about my mom’s bad qualities, she has a personality, on par with Manami’s, of a doting mother to the point of a‘Jocasta complex’[3] on a level to make the ladies from the neighborhood spread indecent rumors.

“Back to you, mom… Why are you approaching?”

My head was pressed against my mom’s breasts.

I can’t believe it.

Though it’s like this, since going on a trip to the Netherworld and awakening my limiter, I thought that, as it is, I had acquired my true power (?) as a monster tamer, but… Mom’s movements just now, I couldn’t even follow them with my eyes!?

Said like this it may sound like a joke, but when I came to, it seemed as if I had been teleported to mom’s boobs.

Now that I mention it, Lilith-san had told me.

Mom was one of the ten people who reached the position of high class monster tamers and her true power was such that she was called a “living legend”.

It was when I was experiencing first-hand the boundless true power of mom.

The sound of a door being opened with force.

Looking to the source of the noise, Manami was dashing out of her room at full throttle.

Perhaps because she had been for three days straight living as a hikikomori[4], her body let out a faint sweaty smell, but this time I’ll let it pass.

Dashing at full power in the hallway, my sister, like that, embraced my mother sandwiching me in-between.

Caught by the pressure of the ripe W of breasts, I… Harbored quite indescribable mixed feelings.

Though I’ve used “homemade” to name this painful to hear situation, in some sense I think that’s unusual.

“The one I love the most in the world after Haru-kun, Mana-tan.”

“The one I love the most in the world after oniichan, Kana-tan.”

“Erm… You two… Could you not fight each other before me?”

A fight between my blood-related mother and sister concerning me… It’s not like I’ve kept up with the times, but… 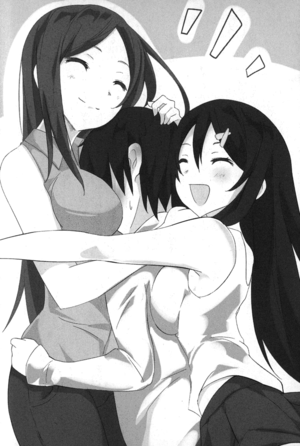 And, in the end, hearing the uproar, Zonmi and the rest came.

… Somehow, I feel that if I don’t ask now, I’ll start with Zonmi and the rest’s introductions to my mother and I’ll miss the chance.

That’s why, I… asked the question I’ve been thinking since before of making her without fail if I met mom.

“Mom. There’s something I want you to tell me.”

“Whaat? Haru-kun. If that’s what you wish, Haru-kun, ask mom anything.”