On the afternoon of the Harem Hybrid’s second day, Kizuna was performing Connective Hybrid in the garden with the rare combination of Sylvia, Ragrus, and Nayuta.

The little girl kingdom feeling was really immoral. Furthermore the liberal environment of doing it outside increased the sense of danger further.

When Kizuna finished that Hybrid and returned into the villa, there were the figures of four people having a drinking bout cheerfully at the entrance hall.

Clayda faced towards Kizuna and lifted her glass.

The four’s appearances were in a state of mostly naked while only wearing golden accessories. They were sitting on a sofa while drinking nectar. It had the same effect as alcohol, so the cheeks of the four were slightly red and they looked like they were in a good mood.

「The four of you are really having fun huh. However doing this in this kind of place……」

Clayda stood up and walked towards Kizuna.

「We were waiting for you after all. We were thinking to catch you right away when you came back.」

The other three also stood up and lined up in front of Kizuna who was tilting his head in puzzlement. Elma leaned coquettishly against him, with her wavy white hair swaying.

「Ufufu, don’t you yearn for a sexy lady after the little girls?」

Lunorlla whose whole body had scars was fidgeting with both her hands and thighs rubbing at each other.

The red haired Ramza scratched the back of her head bashfully.

「Haha, besides see, you haven’t done it with us today right? That’s why─」

Ramza crawled her fingers on her abdomen that had heart mark tattoos on it, and then her fingers opened the chasm below it to show him. A drip that looked like honey was trickling down like a pulled string.

「It’s embarrassing but, I’m at my limit already. Everyone is also like that, right?」

After Ramza said that and faced the other three, everyone timidly opened their legs, and they simultaneously used their fingers to open the entrance that was usually closed tightly to show him.

Clayda whose trademark was her braided blonde hair and her eye patch glared at Kizuna with shame and excitement coloring her cheeks.

「That’s how it is. We, too, also want to make a contribution in the next battle. Don’t just flirt with the other girls, power us up properly too.」

Certainly yesterday he had also entered the bath with them together with Masters, but compared to the other members, his Hybrid’s timing with them was short.

Kizuna reached his hands towards the two who were standing at both ends of the four people, Clayda and Ramza. He touched the waiting part of the entrance that they were spreading open themselves.

Clayda reflexively stood on her tiptoes.

Elma crouched in front of Kizuna and untied Kizuna’s waistcloth.

She stared at the thing that appeared from underneath it with an intoxicated gaze.

「Then, I’ll give it a massage with my breasts okay?」

She lifted up her breasts with both hands and sandwiched Kizuna’s thing from left and right. The fluffy sensation that was like marshmallows assaulted Kizuna’s lower body.

Lunorlla who was left alone nearby was looking around restlessly as though she was losing the place she belonged. And then, she reservedly took a step towards Kizuna and gazed up at him with bright red cheeks.

For the shy Lunorlla, she must be doing her best to plead like that.

When Kizuna stretched out his face slightly forward, she happily piled up her lips on his.

Once their lips met, she proactively stretched out her tongue until inside Kizuna’s mouth.

Ramza let out an envious voice seeing that.

「You’re right. Your hand’s movements is slacking off here, Kizuna.」

Complained to by Clayda, Kizuna moved his fingers intensely.

Clayda’s waist lost strength and she staggered backward. Her balance crumbled and she collapsed on the sofa.

Next Kizuna groped Lunorlla’s breast with the fingers that were soaked with Clayda’s honey.

Kizuna’s other hand that was caressing Ramza was also moving upward. And then, he began massaging her springy large breast.

Seeing the four who were twisting their bodies in pleasure, a bottomless energy was welling up inside Kizuna.

「……Then, everyone lay down on the sofa for me.」

When Kizuna said that, the four’s eyes glinted with obscenity.

Clayda licked her lips and she whispered with a wanting face.

「Fufuh, so you’re getting into that mood huh, Lemuria’s demon king. I’m looking forward to it♥」

Zelcyone who was swimming in the sea was walking on the path that was continuing to the villa.

When she was inside this space of the Harem Hybrid, she was losing sight of herself no matter what. She ended up in a terrible state at the latter half of the Connective Hybrid that she was doing together with Reiri yesterday.

She fawned on Kizuna as though she was an immature girl, asking for pleasure.

「I cannot show that kind of appearance to the Quartum……」

The figures of Quartum and Kizuna indecently entangled with each other flew into the eyes of Zelcyone who was opening the door of the entrance.

It wasn’t really anything surprising because they were in the middle of the Harem Hybrid, but she was taken by surprise and she raised her voice reflexively.

Kizuna noticed Zelcyone’s figure. After him, the four members of Quartum also gathered their gaze towards her.

She said that and tried to pass through that place.

Her legs stopped completely when Kizuna called out to her to stop like that.

「Ku……oi, Kizuna. I should have told you already to stop calling me Zel.」

She complained like that, however, she came until right in front of Kizuna.

──’No, it’s not that I’m……I only want to say my complaint to him clearly, this doesn’t mean that I want to be embraced…….’

However she was captured by Kizuna’s arms and in the blink of an eye she was hugged tightly on his chest.

She only barely said that with a faint voice.

「To think that Zelcyone-sama has this kind of side to her……she is really a deep person.」

It was unclear whether those were teasing or their honest impressions, but in any case the whispers of the four granted Zelcyone shame and shock.

Kizuna made an apologetic expression.

「Sorry. They asked me just now and I honestly answered unconsciously.」

Kizuna’s finger skillfully tormented the spot where Zelcyone felt it the most.

Zelcyone buried her face on Kizuna’s chest shyly while going ‘no no’ with her head rubbing on his chest.

Clayda and co. who were watching that blushed even further.

「Yoosh, everyone let’s get affectionate with heer!」

After that, Kizuna and Quartum thoroughly got affectionate with Zelcyone.

──’When this is over, I’ll erase their memories for sure.’

Zelcyone swore so inside her heart. 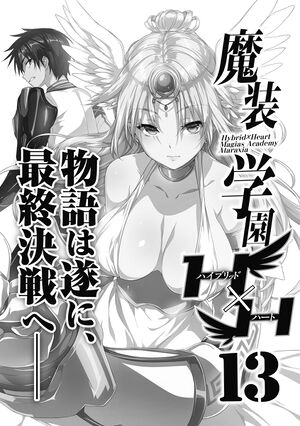