Nooow then, the heroine this time is――even without any time for such story, it’s now already the afterword of the end that is mostly for notice and thanks! Every times, I just managed to fit the page barely!

If right now I’m asked what is the thing that I want the most?, I’ll answer page number!

But thanks to stuffing a lot in this volume, I’m glad I could recover Yurishia’s suggestive talk, or a part of the foreshadowing. New types of Heart Hybrid Gear and magic armor also came out a lot. There are a lot like [Ros] or [El] something, but actually each series has their own characteristics. That is……oops, the page number is not enough.

Next, new characters from Masters also came out, but the world is wide. There are also other aces in each country that drive their Heart Hybrid Gear. I’m thinking that if I can just introduce them sooner or later, so look forward to it!

The figurine that I notice you all previously, its illustration was displayed at One-Fes. It was the cat-ear Hayuru from first volume……that means? Understand, the one modeling it was Kizuna! Eh, you don’t understand what I mean? If you say that, you might understand after trying to by this book!

And then even more new information!

Wow, the drama CD’s launch from the Tsukuru (no) Mori-san was decided! The detail is right now in the middle of being focused on, so even if you ask in Twitter, I cannot answer anything you know! I’m looking forward what kind of casting it will be! Everyone too please try to predict it!

The realization of this kind of media mix is also thanks to the support of all of you readers. Everyone that was always giving support in Twitter or my blog or at Nikosei and so on! Thank you very much! The development of things like comicalization or anime might also be realized depending on everyone’s support!? I’m happy that this [Masou Gakuen HxH] is build up by everyone!

Well then, for the thanks. The sweet eros illustrator Hisasi-san, cool mega designer Kurogin-san, the editor in charge from Sneaker editing department, the proofreader, etc, etc, really thank you very much as always!

In the fourth volume we will plunge into an even more dangerous situation! In various meanings, look forward to it! 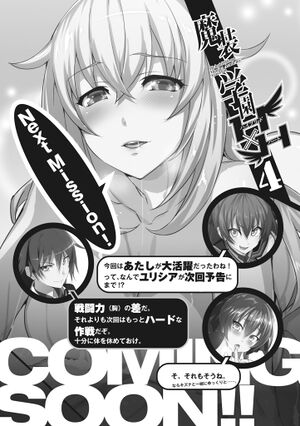 Scarlet: This time I made a great contribution! Wait, why it’s even Yurishia in the next time announcement!?

Reiri: It’s the difference in breastbattle power. Rather than that next time the operation will be even harder you know. Rest your body sufficiently.

Scarlet: Tha, that’s also true. Then slowly together with Kizuna…….