Thank you for waiting, this is the fourth volume of [Masou Gakuen HxH]!

Now, the story is gradually entering the climax. You come to understand the situation of the AU, noticed that there are various circumstances and thoughts of the Vatlantis people, the fighting is going at full speed more and more, that person obtained a Heart Hybrid Gear, the big sister snapped, the mother is doing whatever she pleased, there is o—l play, Kizuna is flying in super speed, and that character is unexpectedly……!? Like that, this is the fourth volume that is full with highlights, what do you think?

This time after all is said and done, I’m able to make the mother that is earnest with her desire to genuinely enter the stage, it was really enjoyable. Was she close with the image that everyone imagined? There are also others like Zelsione that is strongly individualistic making her entrance and so on, it feels like there are only strange people making an entrance in the fourth volume. Perhaps I’m feeling the charm from the little peculiar people rather than the mainstream characters.

The development of the story is the continuance from the third volume, the story progressed while collecting various foreshadowing, but I think the intelligent reader will notice “Hm? I feel like I’ve read this somewhere?” in some scenes.

Which reminds me, it has been about one year since Masou Gakuen’s first volume was released with this fourth volume. Somehow a year has passed in the blink of an eye. What a shocking year.

A year before, I never thought that I will write the script for a drama CD of all things.

Right! On the first day of March, the drama CD of [Masou Gakuen] is planned to be sold!

By the way the script was written by me!

I wrote it by offering all of my summer holiday!

It was also the first for me making something in script form, naturally it’s also the first for me doing a media of only sound. A drama that is developed with only sound……that means there is no images and no letters. It’s falsely similar with a novel. With a content that is enjoyed by hearing sound, and it has to be easily understood with only the speech of characters, how would I make a script for drama CD that is fitting for me? It’s fun thinking those things.

I want to try doing script work again by any means!

It goes to perverted direction even more than usual.

I was also made to participate in the recording. The work of making character in that place through voice is something that cannot be tasted from normal work.

And then the voice actors that acted each character were all magnificent. It was like they were expressing the character’s mentality and ordinary conversation, they acted a trifling scene with loveliness, and it turned out into a magnificent result.

Of course, we also recorded great number of illustrations Hisasi-sensei handed down!

It was shown to me earlier due to the author’s rights, but everything is lovely illustrations I couldn’t hold back.

Who is the one drawing it, you all are really curious aren’t you? Please ascertain it with your own eyes by any means here.

Also there is the plan to include in the package of novel edition with self-novelized script! In addition, it became quite a volume. Please read that too by any means!

And then an even bigger news……

The comicalization is in the middle of progress!

Even if I say that, it’s still in the middle of various adjustment.

Do your best facing the reality, Sneaker Bunko editorial department! I want to quickly hear the follow-up report!

Now that I mentioned it, this fourth volume has a poster created where [Shinmai Maou no Testament] and [Masou Gakuen HxH] are lined up together for the use of bookstores. Uesu-sensei also left a lovely comment on the wrapping of the first volume, I’m filled with gratitude for [Shinmai Maou] and Uesu-sensei!

Nevertheless, is it really okay to write the afterword this long, you feel a little anxious because of it right? That’s right! This time the page number is increased! I got more page amount as a Christmas present! That’s a lie though!

But, next time too I’ll aim to have my page increased. If I can do that, I can spare more pages for everyday scenes and battle scenes, and perhaps the description of various things can also increase. [1]

One way or another this work became a topic about H-scene, but I’ll be happy if you pay attention to the factor outside it too.

Well then, for thanks. Seeing the illustrations are always fun Hisasi-san! And then Kurogin-san who did the mecha design. I’m thankful for always getting help, editor in charge O-san of Sneaker editorial department. Editor-in-chief M who came to drive us out from the meeting room at night, thank you very much for always worrying for us. Ouraidou-san that I bothered to proofread, Shindousha-san that designed the book, and then Tsukuru(no)Mori-san that look after the drama CD, the voice actors, and then the many production staff etc, etc, really thank you very much!

And then of course, all of you readers who always give your support. Thanks to everyone, I can continue writing [Masou Gakuen HxH]. Thank you!

Now then for the next volume……that person waiting until the time is ripe!?

Well then gentlemen, let’s meet in the fifth volume! Eros! 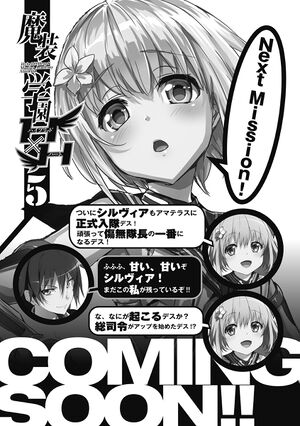 Reiri: Fufufu, naïve, that’s naïve Sylvia! There is still this me remaining!!

Sylvia: Wha, what is going to happen desu? Commander is beginning to go up desu!?