Swallowed by the space-time tsunami generated by Osiris, Oldium that Grace and the others of the Vatlantis group boarded drifted ashore at Osiris’s world.

Clayda glared at the monitor which had its searching range turned to max.

“There is nothing but sand as far as the eye can see. However, based from the image we saw when we did emergency landing, we know that there is something like a city at the other side of the horizon.”

“Then we can only go there to see. I will go for a bit and look at the situation there.”

Grace was about to go out of the bridge while saying that, but Zelcyone stopped her in panic.

“Please wait. We don’t know what kind of danger is waiting there. The Quartum and I will depart for reconnaissance.”

However, Grace pouted her mouth in dissatisfaction.

“What are you saying? Exactly because we don’t know what kind of enemy is there and the possibility of danger that I have to go. If there is a machine god there……all of you should know how strong those bunches are. Isn’t it only natural for me who has the greatest combat strength to go?”

“You must not. Grace-sama can just prepare on the bridge. Please leave that kind of trivial work to us.”

“What are you saying Zel? That you have power even stronger than me? Are you saying that you possess a strength that can possibly oppose a machine god?”

At that time Zelcyone looked startled. Clayda, Elma, Lunorlla, and Ramza of Quartum felt a faint out of place feeling.

Zelcyone’s eyes were wavering. Seeing her like this was really rare. The four Quartum displayed pure interest rather than anxiety at Zelcyone’s agitation.

“A, at any rate, for the emperor herself to perform reconnaissance is just outrageous. Please leave it to us.”

After saying that Zelcyone turned on her heel.

“I will be doing the preparation for my sortie. The Quartum, too, do each of your own preparation.”

Without waiting for any reply from the four Quartum, Zelcyone left the bridge as though she was running away.

She crossed the corridor with fast pace and entered the elevator with a leap, she then pressed for the floor where her room was. Oldium had an emergency landing in a tilted state, so the elevator was also tilting diagonally. Leaning on the tilted wall, she heaved a deep sigh.

“Even though this is not something that can be hidden forever……”

Zelcyone was able to obtain the power that could possibly oppose a machine god.

The new power she obtained was the result of the Core’s reinstall with Hida Kizuna. Of course it was an act for the sake of protecting Grace and searching for Aine. She had no other sentiment except those.

But, when she thought about the feeling of Aine and Grace, doing reinstall with Kizuna felt like betraying those two somehow, she couldn’t talk about it honestly.

In the back of her mind, what happened in a room of Ataraxia’s hot spring inn flashed.

Zelcyone’s cheeks boiled red and she bit her lip.

“Good grief. This is that guy’s fault too.”

The memory of what Kizuna did to herself was rising to the surface of her mind. The tip of her breast that was touched by Kizuna. Her own finger touched that place as though to recall that sensation.

At that moment, a sweet sensation came from the tip of her breast to her waist, and then went to her brain through her spinal cord.

Unconsciously a sweet sigh leaked out from her mouth. Her fingertip continued to rub her breast searchingly as though to pursue that sensation.

The fabric of her military uniform was a bother that she strengthened her finger’s movement. Electrifying sensation resounded on the pointed end of her breast.

‘――The place……Kizuna touched. The place where the Core was installed into me…….’

Zelcyone described the pleasure at that time to ruminate on it, she caressed all over her body. Her fingertip was unconsciously reaching out to her crotch.

Zelcyone was surprised at her fingertip’s sensation and in panic she peeked at her own nether region.

Over there was already damply wet, the nectar overflowing from between the high legging became drips along her thighs and flowed down towards her calf.

Zelcyone’s face turned red inside the elevator where she was alone.

She had to wipe up the overflowing nectar before anybody else entered the elevator. For the Imperial Guards captain Zelcyone of all people, walking around while her nectar was dripping from recalling her tryst with Lemuria’s demon king, it would be a matter of her honor if such thing became known.

After thinking so, she then ‘What tryst! That was just work!’ scolded herself like that.

She tried to wipe her nectar with her fingertips and touched between her crotch.

She plugged her mouth in panic.

‘――Wha, what, what is that girlish voice just now?’

She clenched her teeth and took out a handkerchief from her breast pocket, hesitantly she wiped up the drips along her thighs.

“You bastard……Hida Kizuna. This too, everything is that guy’s fault!”

That man was stealing her important things one after another. Ainess and then Grace. And then by any chance, even the Vatlantis Empire itself.

‘――Ainess-sama and Grace-sama too are infatuated with that man. I cannot deny their feelings. But, if that’s the case then what will happen?

Will that man become Vatlantis’s emperor? In that case will I serve that man, that I have to protect him, Ainess-sama, and Grace-sama?’

Inside Zelcyone’s chest, a strange feeling that she couldn’t decide whether it was disgust or amusement attacked her. Certainly he was the leading actor that once saved Atlantis from that Nayuta. She also understood that his feeling that treasured Ainess and Grace wasn’t a lie or false.

“No, screw that. Even the reinstall before this……his caress was crude. Compared to my technique his couldn’t possibly compare. There is no way he can satisfy Ainess-sama and Grace-sama with that.”

――Then what should she do?

After she murmured until there, her face turned bright red and her lips pursed tightly.

‘――Am I sane? Just what foolish thing was I thinking just now!’

A floating window appeared before her eyes at the same time when the elevator door opened.

“Wha, what! What happened, suddenly calling me like this?”

Inside the window, the faces of the four Quartum were pressing against each other while peering at her. She somehow felt like the full particulars of what she did just now was seen, causing the beating of her chest to grow violent.

{Most likely, Grace-sama is heading alone towards the place that seems to be a city――}

Before she finished speaking, Zelcyone went out of the elevator and searched for the nearby external hatch.

“We are heading to that city right now. Lunorlla and Ramza follow me. We have to think about passing over Grace-sama too. Clayda and Elma are standing by in Oldium.”

After listening to the reply of the Quartum, Zelcyone opened the hatch and stared at the desert that was continuing until the horizon. No matter what happened, it didn’t change that Ainess and Grace were important existences. Right now she wouldn’t think any needless matter and just protected her master. That was the first priority.

Zelcyone went out from the hatch.

After she yelled so, the newly reborn Teros was equipped on her body.

This was the new power she obtained for the sake of protecting her master.

There Ramza and Lunorlla were descending from above wearing their magic armor.

Zelcyone flew away with a force that left the two behind.

Even Zelcyone herself didn’t understand which reason was the correct one. 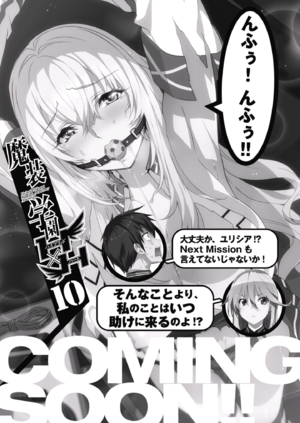 Kizuna: Are you okay, Yurishia!? Aren’t you unable to even say the next mission like that!?

Aine: Rather than that, just when are you going to come save me!?