On a Godless Planet:Volume1A Prologue 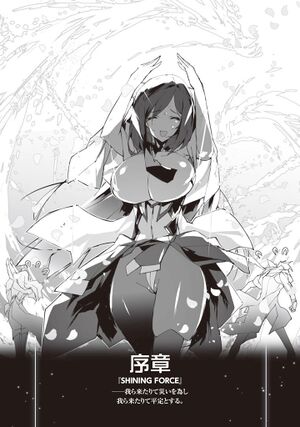 This seemed like a lot of trouble to me.

I meant the dragons. The dragons made of fire. They were trying to crawl up onto the field of bedrock we were standing on.

There was a bit of a siege going on at that field. The sky was as dark as night and a table-like plateau rose up 300m from the lava like Mt. Fuji. That was our space, so there was only really one thing for us to do.

“I’m already fighting back, you know!?”

The dragons were forceful. They had been serpentine before and I had thought the plateau would make this easy, but now they had these leg-like flippers and…

“A prominence is coming from above!”

An arch of flames erupted from the lava and transformed into a dragon midflight to arrive up on the plateau.

It looked beautiful at first glance and it showed just how far the dragons were willing to take this, but…

“We will deal with that.”

“We’ll go on ahead! You take care of the rest!”

The more physical upperclassmen ran off to intercept the arriving dragons.

“Since I can’t fight, does that make me the commander!? Yahoo! I’m in charge! And my overall command has to be something like ‘throw your lives away’, right!?”

“I really hope you meant to add a ‘do not’ at the start there.”

Meanwhile, my upperclassmen dealt with the dragons.

We have fought them several times before, but…

“I’m used to it now, but they sure can be persistent!”

<I have been restraining them with my security system for the past few days, but they seem to be in a bit of a frenzy now that you are here.>

“Is that so?” everyone said while readying their weapons.

Lightning strikes fell from all across the dark sky and a white glowing sword stabbed down across the few hundred meters in the center.

The lightning sword spun around and slashed along the path my upperclassman’s hand took.

He swung the lightning all around, so there was no dodging that wide-range attack.

The dragons who had just crawled on up were hit and destroyed by the horizontal slash of lightning, but the flames forming them continued forward.

A blade of ether several hundred meters long “split” things rather than piercing them.

The white sword tore through it all.

But the enemy did not quit.

“The second wave is coming!”

She was right. As if to say the previous attack had been a practice run, more than double that number of flame dragons pushed in from below and crimson arches flew through the sky.

That doesn’t look good, I thought just before hearing a voice.

“Um, sorry! I lost track of time working on some homework!”

I turned back toward Senpai and everyone else did the same.

“No, no, no, no. Thanks to everything that happened before, I hadn’t kept up with the summer homework I was supposed to be doing every day! Anyway, I’ve already activated my Auth Spell!”

“Ohh!” someone shouted. Senpai’s Auth Spell was the perfect option at times like this.

It could annihilate the enemy.

So we all watched the white mist of flower petals scattering around her.

It spread out like a blizzard and reached the dragons.

Everyone but Senpai ignored me, but that was pretty normal. It was important not to let it get to me. I wasn’t gonna stop doing this! Just you watch! Meanwhile, Senpai tilted her head with a puzzled look on her face.

“Well, um, my Auth Spell doesn’t seem to be working.”

Everyone else noticed as well.

“Is it just me or is Senpai-san’s flower mist not doing anything?”

It was not just her.

The white flower petals scattered around the dragons, but they had no effect. Everyone focused on that while fighting.

<How rude! That will never happen under my management!>

Then what was this?

“Did I get the name of the move or the pose wrong!?”

<You actually noticed, ape? Yes, the proper effects require shouting the proper name. So are you ready? Spread your arms and then hold them out in front of you while shouting Heart-Pounding Flower Blizzard! Lovey Dovey Senpai Lovestruck Storm! Here we go!! That should trigger the effect after the fact.>

I spread my arms to the side and then held them out in front of me and shouted the required words.

“Why did I turn to watch that?”

“Were you too specific about the target in the last battle?”

“Yeah, she did make that whole announcement.”

“Ehh!? Is that how it works!? This Auth Spell is starting to sound kind of useless.”

“You don’t have to say that yourself.”

<You could have said it wasn’t true.>

“No, this is perfectly fine, Senpai! I love that careless side of you! And the rest of us will support you, so it’s all good! I can only provide moral support, though!”

“Well, um…I can be a klutz at times. But if you say so, Sumeragi-kun.”

Embarrassed Senpai was a wonderful thing. And a bunch of level up Revelation Boards appeared around her.

Everyone gave me a serious look, but I ignored them.

And the next thing I knew, several flame dragons had arrived in the sky. They gave a roar.

They all rushed at us in something like a charge. The others prepared for a fight as that considerable pressure approached, but…

“What are you weaklings doing?”

A light suddenly appeared in the sky and blew them all away.

They were all hit by a direct attack.

A flash of bright light scorched and dried out the flame dragons until they turned to dust.

This was thanks to the girl who had appeared behind us at some point. She was munching on a bag of Karamucho.

They didn’t need to be told that. After a quick wave in lieu of a response, they began fighting back against the flame dragons.

Those upperclassmen slipped past their opponents’ movements to get some solid footing, and…

One of them made a strike that scattered a dragon as fragments of fire. And another…

“It is time we moved ahead.”

He attacked with the giant white sword he summoned.

A shield measuring a few hundred meters crashed into the wall of dragons.

“Ohh! …Well, this is more our usual style anyway, don’t you think?”

“Senpai-chaaan! You and Sumeragi-chan go make some tea and wait in the stone hut! Yomoji-chan should be here later, so let’s get started on the next stage!”

“S-sorry about all this! And thank you!”

We looked to the center of the plateau. There was a stone hut there that acted as a shelter.

She sped up to move alongside me and then sighed.

“Don’t worry! Fighting was never your thing, so you have a lot of learning to do! You just have to come up with a different type of Auth Spell for next time, so let’s work at it together!”

“You really are a…strong person.”

“No, I’m a weakling that dies at the drop of a hat, so I’m not strong at all! I’ve already caused you all tons of trouble by dying over and over, so I need to help out where I can!”

<You have died far too much even for a video game.>

“Yeah, but I’ve got infinite lives.”

“I need to make sure I forget as little as possible! I’m remembering a lot now, but I’ve still forgotten far too much!”

A lot had happened and things were getting pretty exciting, but it was summer break outside. We could head to school and chat there too.

It had all taken this turn just a few days before.

Let’s think back on all that for a bit.