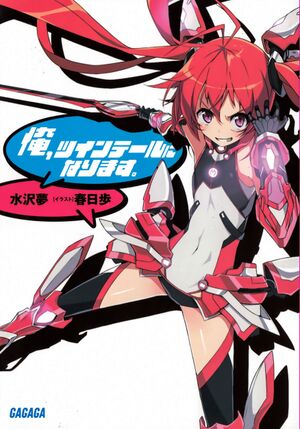 For the sake of the Earth, I will become a twintail!

Mitsuka Souji is a normal high school student with an extraordinary passion for twintails. One day, Twoearle, a beautiful, mysterious girl who claims to come from another world, appears before him. And at the same time, monsters appear in the town where Souji lives!

“Fuhahahahaha! We will gather all the twintails of this world!”

They are creatures from another world who feed on the power of the human spirit, Elemera. Twoearle entrusts Souji with the Daydream Armor "Tailgear," which is powered by his intense twintail element, and he transforms into a young girl twintail warrior, TailRed!

From this day, an aberrant battle with TailRed and a little bit of transformation has begun!

Winner of the judges' award in the 6th Shogakukan Light Novel Awards.

Here is the registration page. Contact Contradiction before signing up. The Baka-Tsuki format guidelines might come in handy, although this project has its own version: Ore, Twintail ni Narimasu:Format Guidelines

If you want to ask questions or send complaints or comments, one avenue of contact is the Talk Page. It has a little Q&A section, too.

There is also the neglected Feedback thread.

For details on who did what, please consult the project registration page.

Project Status: Inactive, hasn't been updated in a while