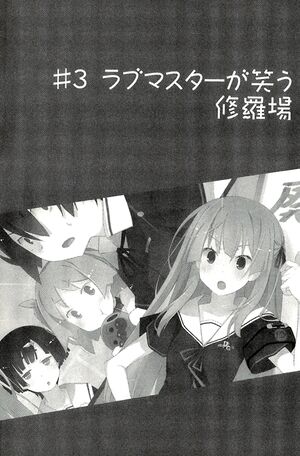 At the end of the third day of summer cram school.

After the fifth 90-minute lecture, I was exhausted. Since Chiwa was eating out with her parents today, it would have been cumbersome to prepare food for just one person. So I was thinking about going to eat out somewhere.

I was wondering where to eat as I sat in my seat surrounded by rows of people who were leaving the classroom. Kaoru and Fuyuumi approached me to say something.

"Eita, do you have some free time today?"

"Well, I was thinking about eating somewhere and then go home."

Hence, Kaoru elbowed Fuyuumi, who stood next to him.

Fuyuumi was in a daze and said:

"Hey, didn’t we just talk about having something to eat before we go home?"

"That’s the first time I heard that?"

Then he suddenly lowered his voice, leaned his face so close to Fuyuumi that their foreheads almost stuck together, and said:

"Wasn't it the same like Eita just said~? Weren't we talking about having a piece to eat as well~? Don't you think this is a good opportunity~?"

She then straightened up, faced me and said:

"It can't be helped! I'll go together with you!"

Also just yesterday Masuzu told me to confirm 'whether Fuyuumi has a boyfriend' or not. So I have to take care of that, too.

The three of us left the classroom side by side.

As we walked through the corridors, I could immediately feel the eyes of other lecture students on us. The girls glance at Kaoru, while the boys stared at Fuyuumi, certainly these two were attractive. I even heard someone say 'they’re so well-matched—'. Incidentally, I also heard some other voices say 'who’s that failure on their side?' 'He’s ruining the picture. I wished he got out of the way.' Just shut up, you idiotic idiots!

We walked into a family restaurant near the cram school. Maybe because it was still rather early, the restaurant wasn't that crowded. We ordered our respective meals and large fries that everyone could share. Then we went to the soda fountain to get our drinks. These were typical actions high school students made in family restaurants.

"I’ve always wanted to ask this."

I said to Fuyuumi, who sat across from me. We were sitting in a four-seat box table.

"Why do you always wear your uniform?"

"Isn’t it written in the school rules that 'a student must wear their uniform when they go out'?"

"Not even half of the students follow that rule."

Of course, Kaoru and I were wearing plain regular clothes.

"Can the disciplinary committee even regulate these kinds of things?"

"Of course not, since we’re outside the school."

"So you don’t have to follow the school rules so strictly. Why don’t you wear regular clothes?"

When Fuyuumi heard this, she whispered, her body slightly shaking:

"Y-You won’t look down on me and think I’m a bad student?"

"Why would I think that? In that case you would merely not wear your uniform."

Fuyuumi seemed to have a happy smile.

But to mention it, I remembered that she didn’t bring her cell phone to school. While it was definitely a violation of school rules... shouldn't it be enough to just turn off the phone during class time?

"So when you go on dates, do you wear your uniform?"

Fuyuumi blankly repeated what I said.

"Ah, you know, your college boyfriend Michel. Do you wear your uniform when you go on dates with him?"

Of course it's that kind of date. Are there even other kinds of dates?

"Eita, to be honest about that issue."

Kaoru, who sat next me, interrupted seriously:

"There’s a little misunderstanding about this. It’s better to clarify this, right, A-chan?"

Fuyuumi swallowed her saliva and stared at my face.

"In fact, about that Michel thing..."

What was it? If she wanted to talk about her boyfriend, it was a big help for me.

I turned around to the voice behind me, and found Chiwa standing there with her arms folded. She looked rather dressed up, as if she was going out.

"Chiwa, why are you here? Aren’t you eating with your parents today?"

"Ah, we’ll be going to a steakhouse in a bit. But I just happened to see Ei-kun and you all here."

I looked out the window and saw Chiwa’s parents smiling and waving at me. I hurriedly waved hello.

Chiwa’s eyes were filled with suspicion as she stared at Fuyuumi and said:

"So, in reality what? That Michel in reality is a lie, something like that?"

I couldn’t help but feel sorry for her:

"Hey, Chiwa, don’t do that. If you’re that overbearing, you won’t let her say anything."

"Is Ei-kun siding with the disciplinary committee? It's because of those people that our Maiden's Club[1] is in danger."

"This talk is totally different from that. And first thing, just look at her."

I said, pointing at Fuyuumi’s clothes.

"Even in the summer holidays, she still follows the school rules to this point and wears her uniform. There’s no one as honest and straightforward like her. Thus, naturally she wouldn't fall into a silly lie like that."

I said again what I told Masuzu last night and Fuyuumi immediately began to quiver with her head lowered.

"Really~? Are you sure she didn’t try to lie and flaunt herself because Natsukawa and I were interrogating her?" 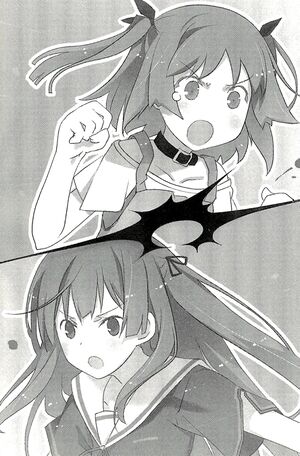 "People who try to lie and flaunt themselves don’t have any other qualities to be proud of. Fuyuumi’s grades are at the top, and she is an admirable, responsible disciplinary committee member. So there’s no reason for her to lie ——Right, Fuyuumi?"

When Fuyuumi heard this, her body suddenly stopped trembling.

Under Chiwa's and my eyes, Fuyuumi slowly raised her head and said:

"T-That’s right! As the number three in our school grade and as a disciplinary committee member, I am honest. It’s impossible for me to get carried away with lying and flaunting about myself like an self-pleased empty-headed stupid woman! Women who spray such lies are just the worst! Street trash! I-I-It would be better if they die—————!"

Uh, I didn’t say something to that extent.

"Isn't it fine?! That girl alone is the one I can never allow myself losing to!"

Pressed by Fuyuumi’s excitement, Chiwa backed up and said:

"T-Then what were you about to say?"

"It's obviously about that! I was just saying how Michel and I are ~ really ~ suuper ~ love~love! In August he’ll come home, so we already planned a lot of dates for then!"

Fuyuumi took advantage of the moment and slowly approached Chiwa. At this moment, a new figure approached Fuyuumi from behind.

——Would appreciate more details about that talk.

Even on such a hot day, Hime’s poker face wasn’t any different. As she blankly stood there, she looked dressed like a real princess with a luxuriously ornamented blouse and a matching long, black skirt.

"I was exploring point YBK when I felt a 'Dragon Fighting Spirit'Dragonic Aura, and then I noticed Eita. Hug me tightly, 'kay?"

"I still do not understand these things of this world, so I want to absorb all sorts of experiences from knowledgeable modern-day people, such as you."

"Wait, Hime, where did you get that idea from?"

"Yesterday, the President sent me a text message. She said Fuyuumi Ai was very experienced in love, so she's in essence the best talent to learn from on how to become 'popular'."

So it was Masuzu who encouraged her?

I don’t know why Masuzu started to use such clever language to deceive Hime these days. Perhaps this is just a plot to shake up Fuyuumi?

Hime pulled Fuyuumi’s hands, stared earnestly at her, and said:

Then she fiercely looked at me for help——— Ahh, just don't ask me for that, when Hime becomes like that, no one can stop her.

"L-Let's talk about the subject of our dates. I often wear a one piece white dress! He seems to like pure and cute clothes—— Boys really like girly clothes that feel 'a little exagerated'! That being said, wearing ribbons and such to dates is, on the other hand, 'too childish' and enough to be laughed at!"

"How long have you dated 'Michel'?"

"How did you meet that college student?"

"When he was my middle school tutor… Wait, no— It was fate. When he confessed to me, I was very astonished, but at that time I was single."

"So you went out with someone even before that?"

"Looking back, Michel is my third one. All of them confessed to me! Actually, I’m even more popular than that Natsukawa Masuzu—!"

Hime was fascinated by Fuyuumi’s big talk, and she kept whispering 'amazing, Master'. So… was this cool? I myself, as an anti-love, simply couldn't understand any of this.

Chiwa very unwilling bit her lower lip while being in silence. Faced with such specific details, there was nothing to say. It was unreasonable to call it 'provisional lies'.

The final outcome of this matter seemed to be an error in judgment by Masuzu.

"Right, Kaoru, are you okay? Sleepy?"

I looked to my side and noticed Kaoru’s 'head' down on the table.

Kaoru then slightly raised his head to answer me directly:

"Is it because cram school classes are tiring?"

"Yes, it's that subject where we learn that 'girls are such troublesome creatures'. I thought that I had learned it already."

After Kaoru said such a profound but incomprehensible line, he sighed a long breath.

Fuyuumi’s laughter was so extreme that it caused the neighboring guests to look back. I wonder why, but at that time her face looked as if she was about to cry.

Chiwa left with her parents, and Hime left after saying: 'I can feel the changes in a new 'wind'.' In the end only Kaoru, Fuyuumi, and I were left.

Fuyuumi, who seemed exhausted and distracted witless, was silently munching on baked onions. Kaoru and I were unable to start a conversation and so we ended our dinner after there was no decent dialogue.

"Then, Fuyuumi, Kaoru, see you tomorrow."

Fuyuumi looked as if she were about to die and didn’t say a thing. I didn’t know why even Kaoru seemed to have no energy.

"Rest up, you two. Tomorrow some very difficult classes are still waiting for us."

When I said this and was about to leave, Fuyuumi's words stopped me.

I looked back and saw Fuyuumi’s intense look, and said:

"'She has a boyfriend', when Kidou-kun heard that, what did you think?"

I couldn’t understand the meaning of her question, and tilted my head puzzled. Fuyuumi gave an 'aaah', sighed, and said:

"Sorry, nothing. You can forget about it."