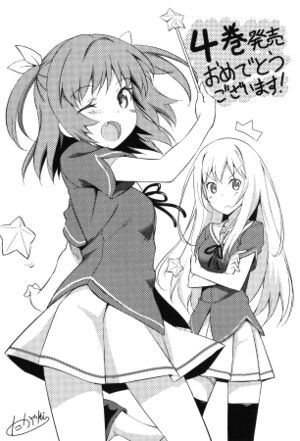 In many locations, the characters moved for the sake of "Love". "For who's sake", "For what sake", they brandished love, got themselves tired; giving their all, dying and living for it.

On the other side, Natsukawa Masuzu moved for "the sake of Running Away from Love". At the very least, she believed that. However, she couldn't escape it by herself, and as such, got Kidou Eita, a man with the same value system as her, involved, and continued running away from love. It was not an "Escape of Love"[1], but an "Escape from Love". Where can these two run to? And what will they go through when love catches up to them? I'll be happy if you can continue following it to the end.

In this volume, I was able to have Takaya-Ki-sensei to be the guest illustrator. I feel that it's my lifetime pride to have been able to entrust it to my favorite mangaka, the illustrator of my debut work, "Odoru Hoshi Furu Reneshikuru (踊る星降るレネシクル)". With this, I'm able to add one more thing to my list of things that I can be proud of. I'm thankful.

And that's all for now. Thank you for staying with me.

(TLN: The thumbnail image is by the aforementioned Takaya-Ki-sensei, which congratulates Yuuji Yuuji for the launching of volume 4 of OreShura.)