#12: The Resolution to be a Boyfriend is Mayhem[edit] 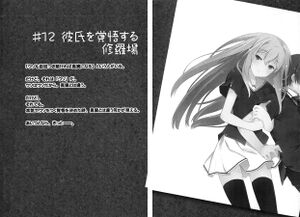 After that had been over, I was forced to kneel on the beach, suffering from a lecture while being sandwiched between Chiwa on the right and Fuyuumi on the left. Also, they again used an oil-based pen to write on my left and right arms. Fuyuumi wrote, 'shameless', and Chiwa wrote 'adulterer'. I'll take a hundred paces back and admit that shameless could fit, but it wasn't accurate to label me as an adulterer, right?

Also, Hime seemed very happy because she expressed her 'dere' very well. She was totally in a competitive mood:

Fuyuumi was looking at the big screen and very impressively gave each contestant a review. Because she was so distracted lecturing me, she missed her scheduled time and was totally disqualified. She had told Hime not to run away, but in the end she ended up missing her own performance. How silly.

While I was forced to remain kneeling, I asked Chiwa who was grasping her knees:

"I remembered she was the twelfth, so that would be the next one?"

After the eleventh contestant received a round of applause and left from the side of the stage, Saeko-san immediately walked to the center of the stage.

—"Then the next one would be—— entry number twelve, Natsukawa Masuzu-san."

When Masuzu appeared on the stage, the noisy audience quieted down immediately. 'A foreigner? From which country?', 'Is that silver hair real?', 'So pretty…'. Voices of admiration came from all directions. This was a familiar sight that Masuzu and I had already seen happen countless times.

'The Natsukawa family jewel', was how Mana described it.

But I knew this girl's true nature.

I knew very well that she was a high school student who was arrogant, self-important, and conceited, who didn't know when she had taken something too far.

—"Masuzu-chan, first off, please introduce yourself."

—"To the MC and everyone here, I have to make an apology."

—"I've lost the right to participate in this contest. To be precise, I lost it last night."

Bewilderment spread throughout the venue, which was filled with a buzz that was different from the excitement earlier.

I clicked my tongue.

This is really what you've decided, huh, Masuzu?

—"What do you mean by that? Masuzu-chan?"

—"It's a simple thing. I got dumped by my boyfriend."

The buzz in the crowd increased suddenly.

Pointing at Masuzu who was standing there blanking, some lovestruck guys started saying, 'She's so beautiful that he couldn't handle it[1]', 'She probably has a really bad personality, right?', 'What matters in love is compatibility—'.

I clenched my fist.

The difficulty of handling Masuzu is beyond your imagination.

Masuzu's bad personality is beyond your imagination.

And beyond your imagination, Masuzu and me have———

"Eita, what happened? Did president just speak the truth?"

"Break up? Then, Ta-kun is free? Does that mean Ai-chan is the epic winner yet again?!"

I let the questions from Chiwa and the rest slide.

I kicked off from the sand, breaking into a sprint.

I pushed through the guys who made fun of Masuzu and aimed for the stage!

No use! My voice couldn't reach the stage from this distance. Masuzu couldn't hear me!

I pushed my way through the crowd and continued shouting as I ran.

"WHAT'S WITH THAT DEJECTION, MASUZU?!"

Masuzu did not look at me. She was merely answering Saeko-san's questions blankly.

"CAN'T YOU HEAR ME, MASUZU?! DONT KEEP LOOKING DOWN!"

As I thought, she couldn't notice me. The bad-mouthing around me was louder. My voice couldn't reach her.

As I forced my way through the people, I was rewarded with cold stares from around me. I got hit on the back and kicked on my legs. Sorry. It's my fault. But forgive me, please. I-I have to get to her side!

"AREN'T YOU THE PRESIDENT OF 'JIEN-OTSU'— SOMEONE WHO CAN BRING OUT HER MAIDEN SELF?!"

I yelled as I waved the '乙' strap, hanging from my cellphone, which I'd taken out.

SO UNTIL THE VERY END, ACT OUT NATSUKAWA MASUZU AND SHOW IT TO US!"

By the time Masuzu noticed me, I've already made it to the stage.

The crowd became silent, and Saeko-san's mouth was wide open.

Masuzu stiffened visibly as she stepped back.

While my shoulders bobbed as I was catching my breath, I grinned.

"Isn't it obvious? I came here to be youract as boyfriend."

I took the mike from Saeko-san, and my voice rang throughout the venue.

"Do you have any idea what you're saying?"

"No matter how many times we redo it, it'll be the same. It will be nothing but a distorted mismatch. No matter how much a monkey imitates a human, to the human, it's just laughable. It's like that. A fake is still a fake. It can't become a real thing."

"That's fine, a monkey with its fellow monkey, a fake with his fellow fake, things might just go well after all."

"It's pointless. There's so many of those dazzling 'reals' around you, right?"

When she said that, she had a face contorted with so much pain, a face that I had never seen before.

So that's it, Masuzu.

You've been so envious of Chiwa, Hime, and Ai that you can't stand it anymore.

"Yeah. Every one of them is wasted on me. They are all real after all."

"Then why are you so attached to a fake?"

"The reason for that is obvious, right?"

I put my mouth near the mike, and proclaimed to the crowd:

—"THAT'S BECAUSE I LOVE NATSUKAWA MASUZU!"

I hollered at the top of my voice and even though some of the audience covered their ears... I think I did send it out clearly.

It should have reached Masuzu.

"The first time I saw you, I thought this, 'For someone to be so beautiful, her personality must be the worst', and for real, it is! An unbelievably wicked tongue! A stuck-up attitude that doesn't see her boyfriend as a boyfriend! A person who's smart enough not to dirty her own hands! However you think about it, she's just too horrible! She's really only a girl with looks! Such an extreme vileness before me! Idioooot!"

Hahaha, as expected, my true voice was filled with bad-mouthing criticisms.

The crowd had become totally silent, and even with these many people, only the sound of waves could be heard.

Saeko-san had a 'what is this?' look on her face.

However, what came after was the real thing.

"Aren't you the one who knows the best how loathsome I am, and how disgraceful?"

The only person besides me who had come into possession of that notebook, was Natsukawa Masuzu.

The only person in this world who knew everything about my unsightly, weak self, was Natsukawa Masuzu.

"That's why you are the only one for me."

That was everything I wanted to say.

I acted with everything I got.

I lied with everything I got.

"I hated you. Someone like you... Do you remember, the first time we met, you turned your eyes away from me right away? Thanks to that, my first impression of you was the worst. 'What's with this rude man?' When other men looked at me, they seemed as if they had been paralyzed. As for you, you just made a disdainful face. You've really hurt my pride. Even when my only redeeming feature is my face. Why aren't you charmed by me? Why doesn't your face turn red? Why aren't you gazing at me?"

Did I do that sort of thing?

"I couldn't stand it when your grades were better than mine. I couldn't stand it when you didn't try to talk to me even when my seat was beside yours. When I had no choice but to speak with you, you merely replied nonchalantly, and immediately returned to your conversation with your best friend. I also couldn't stand it when you got friendly with your childhood friend. I can't believe you prefer a pipsqueak like her over me. Even though I should be able to bring a lot more fun moments. 'I'll definitely give you hell', I thought. I've always, always hated you. That's why when I got hold of that, I was really trembling in happiness each time I made you depressed. Whenever I saw your tearful face, I was really on top of the world. And at the same time, down in the dumps. Since with that, you got to know the real me. With that, you would surely loathe me——— But yet..."

Masuzu trailed off and looked up at the sky.

Before I knew it, the sky was bright orange from the setting sun.

"You were much gentler and kinder to me after knowing me than before. That's just impossible."

A sobbing voice sounded from the stage.

I braced myself and asked boldly-

"Are those tears genuine? Or are they fake?"

From that cracked voice, it seemed like those tears were genuine.

"Then, I shall decide that for you—"

I grabbed Masuzu's trembling shoulders, drew her to me and closed in with my lips towards hers, while I said: 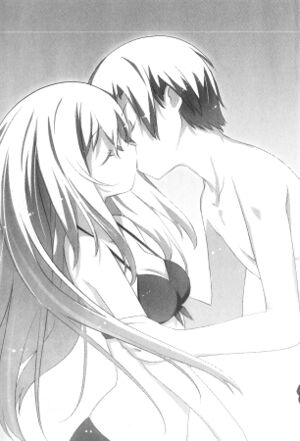 —With that, I fulfilled the promise which I hadn't been able to fulfill yesterday.

I could hear the rousing, howling cheers coming from below the stage.

As I thought about the 'mayhem' that was going to ensue after this, my legs couldn't help but tremble.

'But right now, let me just indulge in this fake kiss', I thought.