#8: Two Women in the Kitchen is Mayhem[edit] 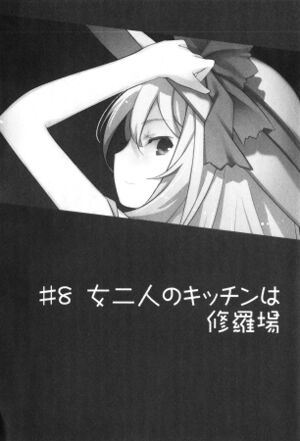 We decided to make curry for dinner.

The hotel had already prepared potatoes, carrots, onions, and beef beforehand. However, it looked like the people that provided the ingredients couldn't get any beef stew. It was still a clear message of 'if you're in a boarding house, it has to be curry' regardless.

After Fuyuumi rummaged around the kitchen cupboard, she shrugged her shoulders.

"Nope. There are a lot of other seasonings, but there doesn't seem to be any curry roux."

"Oh, but there is some sauce for beef stew."

"…It can't be that one of the hotel staff took it with them, right?"

In other words, since the only thing that is lacking is curry roux, we might as well go out and buy some.

"Two people should be enough to buy the groceries. For the sake of fairness, should we decide by rock-paper-scissors?"

"Eita-kun should stay behind, though."

Masuzu pointed at the chandelier hanging from the ceiling of the living room.

"I tried turning on the switch earlier, but it didn't work. Can you find some lightbulbs to replace the broken ones?"

I understand, this falls into the so called 'men's work'.

Fuyuumi readied herself by donning an apron, after which she said:

"I'll stay behind to prepare the curry. You guys can't cook after all, right?"

"Why do you get to decide everything? So unfair!"

Chiwa gave a 'salute' with her hand.

"Sorry! I just wanted to try saying that!"

Thus, aside from Fuyuumi, the three of them played rock-paper-scissors, and Masuzu was the one left behind.

After Chiwa and Hime headed out, I opened the cupboard in the living room and started looking for lightbulbs. Masuzu and Fuyuumi were at the kitchen counter, peeling vegetables.

"Natsukawa-san, is it okay if I ask you something?"

"As long as it's within my ability to answer..."

With my back to them, I listened to their conversation as I looked for a lightbulb in the lowest shelf of the cupboard .

Of course it would have been fine if the light was turned on, that's why I was looking for a lightbulb after all.

"Was Natsukawa-san very troubled during April and May? After being confessed to so many times by the students?"

"I happened to see it once, when you were being confessed to behind the gym. Afterwards, you sighed."

I tried to search by hand feeling for a bit——— No, these all had to be cleaning supplies.

I guess I'll look on the shelf above this one.

"Well, that indeed happened. So what about it?"

"I'm sorry, but I also happened to hear something about the confession too, the voices reached even to the flower garden."

"He looked really angry, that male student. I also dislike guys like that who get angry when things don't happen like they want them to."

I was starting to feel that there was a very severe conversation going on over there.

"If stuff like that kept happening repeatedly, wouldn't anyone start to hate being confessed to? It wouldn't be strange to never even want to date anyone. No matter who it was. "

"Speaking from that perspective, isn't Kidou-kun a very good choice? He is super serious, he doesn't treat girls roughly, and has the best grades in our grade. If you start dating him, no one would think that it was strange."

"Just how far should I peel this potato?"

'Ahhh!', this noise resounded from the kitchen.

Fuyuumi held a potato the size of a marble and shouted:

"You just had to peel the skin off! Why did you have to peel it to the core?!"

"Enough! Forget about the potatoes. Just go peel the onions!"

Because they started cooking again, I got back to exploring the cupboard.

"So, back to our conversation... Ever since you started dating Kidou-kun, you haven't been confessed to, right?"

"That's obvious, of course. There aren't boys shameless enough to want to approach a girl that already has a boyfriend."

"If that was the reason for which you started dating Kidou-kun——— I may not be able to forgive it."

I couldn't help but turn back and look towards the kitchen, watching the silhouettes of their backs.

Since Masuzu and Fuyuumi were moving their hands unceasingly, I couldn't catch their faces.

What kind of expressions were they having right now?

"I don't really understand why I'm being told this."

"I thought about it, after all. Ever since his oba-san mentioned that the relationship between you two is 'fake'. Then I wondered for what kind of motive you'd do that."

She pinched the only tiny onion core that remained.

It was peeled into such a small size that it had a little bit of a cute feeling to it.

"You just had to peel the brown part off! Why did you have to peel it all the way to the core?"

"Hmm. No wonder why it felt like 'don't know where to stop'."

"That's because you're don't seem to be able to do anything without taking it to extremes—!"

Fuyuumi stomped so forcefully it seemed like she would break the floor.

Did Masuzu really come out on top?

Fuyuumi's theory... It certainly is enough to win the jackpot.

As expected from the devilish disciplinary committee member, her performance is nothing like Chiwa's or Hime's.

"If it is like you guessed, then what are we going to do?"

"Oh, I just wanted to polish each grain of rice with the utmost care."

"Even if you stay up till after nightfall, you won't be able to polish it all! How long do you intend to play the idiot?"

"If you don't stop it right now, this gentle Ai-chan is going to get angry soon, so you better knock iiiiiiit————!"

Ah, well, and that had been it.

Probably because she had gotten too tired of yelling, in the end Fuyuumi had been left quietly preparing curry. This could be summed up as Masuzu's, 'silly victory'.

I also had finally found the lightbulb and proceeded to use a folding ladder to install it.

A fragrant smell came from the kitchen accompanied with the sound of cooking, and it was about time that Chiwa and Hime returned.

"In any event, Fuyuumi-san is really good at cooking."

Masuzu lined up five plates along the table.

"Somehow. It's probably because ever since my mom passed away, it's been my responsibility to cook for my father and little brother."

Fuyuumi hummed 'Light brown Vegetable ♪' as she turned off the stove.

"What about Natsukawa-san's family? Do you have any siblings?"

"Mhm, are you two close in relationship?"

"It's the absolute possible worst."

Perhaps because she felt the atmosphere was very unusual, Fuyuumi did not ask any further.

"Well, our family's relationship is pretty good, since it's really hard to make friends after transferring schools so much. It has always come down to me and my brother playing together."

"Doctor… No, we only played normal games."

"Aaaah, so it were doctor games."

If we only look at the way their exchange goes, it just looks like a nice relationship between very good friends from the same club.

However——— What Fuyuumi was saying earlier, had really grabbed my attention.

So, we are really being suspected.

In order for me and Masuzu to burn our 'boyfriend and girlfriend' relationship into their minds, just what did we have to do?