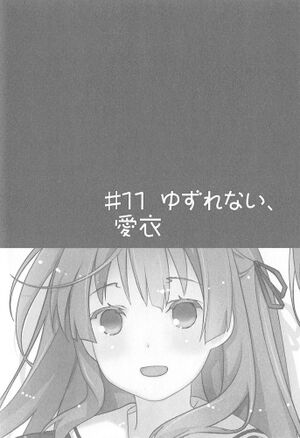 Fuyuumi Ai was forcefully pulled along in the corridor in the direction of the school store.

She didn’t think Kaoru would be so strong, he looks so much weaker than her.

After turning in the direction opposite to the store, Kaoru let go of her.

This place is far from the classroom, and there’s no one in sight.

“What’s this, aren’t you going to the store?”

Kaoru’s long eyelashes fell, as if they were apologizing.

“I’m doing this because I can’t stay silent and see A-chan get hurt deeper than this.”

“What do you mean by that?”

Is he talking about Chiwa appearing before Eita when they left?

Ai thinks she’s being looked down upon.

She knows there’s a strong bond between Chiwa and Eita, they’re childhood friends after all, they should have a relationship that fits the time they spent together.

However, she has a “promise” herself.

It is in her pocket at the moment. The marriage registration. The bond written in clumsy handwriting, strongly holding together the ten years of blank space between them.

“I’ve known them since middle school, I always thought no other girl can come between the two of them.”

“If that’s the case, how do you explain Natsukawa-san?”

“Hmm, I was quite surprised when they started going out. I thought since their relationship hasn’t advance into lovers, A-chan should stand a chance. At least that was what I thought initially.”

“Then, there shouldn’t be a problem, right? Natsukawa-san and him—”

Right before it slipped out, Ai instantly stopped herself.

As long as Eita and Masuzu don’t announce it, their breakup should be treated as a secret.

“You really have a strong sense of duty[1].

She walked towards them, coming from class 1, and despite her sudden appearance, Kaoru didn’t seem surprised.

Ai instinctively knew what was going on.

She was invited here by the two of them.

“I really respect this side of Fuyuumi-san, and I’m grateful for that. And because of that, I can only become your enemy.”

“What are you talking about now.”

“You don’t understand how unhappy I am with the presence of you as a girlfriend.”

Masuzu said with a melancholic voice.

“The winner was decided before the battle, I’m the same as you on this basis.”

Ai doesn’t understand what she is talking about.

“I heard about the breakup from Natsukawa-san.”

Kaoru, who kept his silence up till now, spoke up.

“Also, I heard about why Eita is working hard. Although I kind of guessed it; when I actually heard it in person, it was overwhelming.”

“What are you talking about, I don’t understand!”

The slow pace of the conversation is annoying Ai.

On the other hand, Masuzu was calm, and Ai didn’t like that.

“He’s working hard because he wants to be a doctor.”

“Is that so? As expected of Takkun, aren’t doctors great?”

“The reason he wants to be a doctor—is to cure Harusaki-san’s body.”

“Chiwa’s body? What’s wrong with her?”

“I heard she got heavily injured during last summer due to a car accident. Although it doesn’t affect her daily life, she can’t continue her passion, kendo. In order to let her pick up kendo again, he decided to become a doctor.”

That means, the reason Eita is studying so hard is for Chiwa?

Ai used the strength from the bottom of her abdomen and replied.

“Takkun himself said he’s anti-love. He said he hates love, and he can’t like girls! So, even if it’s Chiwa, he doesn’t like her, right?”

“He even told you that?”

“Yes! That’s why, I will help Takkun with his distaste towards love.”

“That’s a rather huge project.”

“The only person who can do this is Harusaki-san. You and I, we can’t do anything.”

“Because their bond is stronger than anyone else’s bond.”

The bell rang at this moment.

It’s time for the morning assembly.

“I have said what I’ve wanted to say.”

Ai yelled at the leaving Masuzu’s back.

Ai wanted to take out her “marriage registration” and show it to Masuzu.

But when her fingers touched the paper in her pocket, her hand froze.

Ai stared at her silver hair, and gripped her skirt tightly.

Why is it that she can’t show it to her?

Deep down, she already knew the answer.

If she shows it to her, and it gets brushed aside—

If she says “So what?” or something along those lines—

If she asked “Is that stronger than the bond of Harusaki Chiwa?”—

“Memories are memories, no matter how it is now, memories won’t discolour, so it’s better to keep your memories to yourself, don’t let others see them.”

Ai wanted to rebuke, but she couldn’t do it.

She couldn’t do it……

While she was still feeling down, the second semester ended and winter holidays came.

It should be a happy thing to have Eita all to herself, but she doesn’t feel happy at all.

In the same classroom, sitting next to each other, without anyone to disturb them, it is the perfect chance for love.

In the morning of the first day of class, Ai refreshed herself before her mirror.

There’s only attack in love. If his heart leans towards Chiwa, she’ll need to attack until he turns back.

Ai entered the classroom one hour before the class starts. Just a little is enough, a little more time to talk with him.

She thought she was the earliest, but there was already a boy studying in the classroom.

He raised his hand and flashed a smile, making Ai slightly dizzy.

He’s here so early, and studying so hard.

“So noisy even in the morning!?”

Once she gets excited she will start making weird noises, that’s a bad habit of hers.

I just can’t give him over to Chiwa.

Ai stole a glance at the side of his studying face while checking the contents of her back.

The Christmas present is ready.

“Sorry, give me one moment.”

He took out his phone and stared at the screen. He seemed to have received a message.

He chuckled while looking at the screen.

What is that? Some interesting text? Or is it a picture?

Who is the sender?

He started typing the reply quickly.

—Hey, whose message was that?

It’s just a simple question, but she can’t make herself ask it today.

If she sent him a message, the fastest she gets a response is in ten minutes, waiting for over an hour is not a rare thing.

After replying, he turned the screen towards her.

A picture of gorgeous food decorated with candles.

This was Chiwa’s dinner yesterday. They are a three man family, you know? And she ate over half of this herself.”

“Heh, hehh, that sounds like something Chiwa would do.

She knows her smile is stiff.

Fuyuumi was desperate, she needs to start a conversation. If this goes on, it will all be about Chiwa, and she doesn’t want that. It’s rare for them to be together alone. Something, something that provides a chance to give him the Christmas present.

“Takkun, your goal is the medical department right?”

The instant she finished, Ai regretted it.

Why, did she choose this topic specifically? There should be a limit to not knowing how to talk.

“Oh, you are quite informed.”

She thought he would ask her where she heard it from, but he was unexpectedly honest.

“Of course,” Ai nodded, that’s the name of the public university in the neighbor district.

“Ah, I’ve heard about that, the one with the scholarship, right?”

A third year senior in the disciplinary committee was said to be aiming for that too. However, her results were not good enough for the minimum requirement, and she gave up on the recommendation during the first semester.

The third year was single digit in her ranking throughout all the exams, and had good records in her co-curriculum activities too.

“That’s quite a hard goal.”

He nodded while flipping the textbook, but he looked happy.

“But but, Takkun can choose any other school, right? Like a university in Tokyo or something like that.”

“Because it costs quite a bit, lodging will be a problem.”

“If that’s the case, how about the law department in Jinzuu University? It’s well known for it. My mom’s mentor is still there, and prosecutors or lawyers are quite respectable careers too!”

When she came to her senses, she realized he was staring at her.

Ai finally noticed that she was yelling again, and her face turned bright red.

“But, my ambition is to become a doctor.”

When I heard Natsukawa Masuzu’s speech, I already knew.

Because I know your kindness the best.

“A-chan, did you decide on what you want to do? Is it a lawyer?”

“That suits you well, it’s perfect.”

Even with the praises, she’s not happy.

She didn’t want to talk about this topic in the first place.

Why did it turn out this way?

Today is Christmas too.

You know my feelings too.

Can’t you take a hint?

Because you’re anti-love, it doesn’t matter how your Christmas is?

Ai left her seat, he stared at her, puzzled.

“The class is starting soon, you know?”

Ai ran outside, opposed to the few students walking into the classroom. Although bewildered stares pierced her from different angles, she couldn’t care less.

Just like this, Ai retreated in tears during Christmas.

Everything went according to Masuzu’s plans. 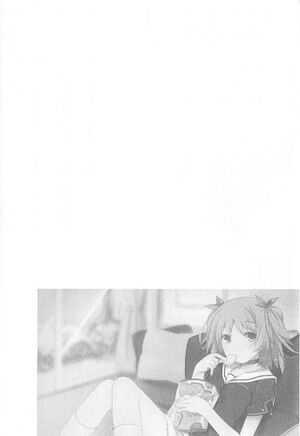