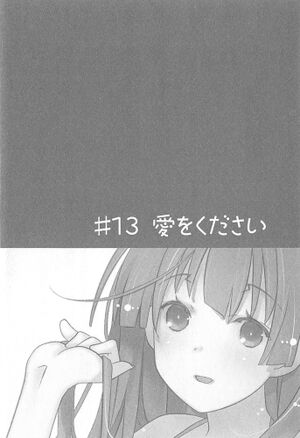 After ringing the doorbell, her younger brother Yuuki-kun answered the door.

I heaved a sigh of relief, as I was worried that the one answering might be her father, and it made me nervous.

Also, since I already met Yuuki-kun once, it’s easier to talk with him.

“Is your sister not back yet?”

“Nope, don’t you go to the same extra class as her?”

I can’t just tell him she ran out before class started, it would make him worried.

“She hasn’t reply to my mails or answer my calls, so I decided to come over and check.”

I got her address from Kaoru. He seemed to be worried too, and went to search for her.

“I understand. If she returns, I’ll ask her to contact you immediately.”

As usual, he is a reliable younger brother; he doesn’t act like a fifth grader at all.

“This is her bag, she left it in class.”

“Thank you for going out of your way to bring it here.”

After Yuuki-kun took the bag, he stared at me with a serious face.

“Takkun-san, I’ll leave my sister in your care.”

“Because my sister is obsessed with you, to a point where I am embarrassed just by looking at her.”

“Every night, violent breathing or screaming can be heard from her room. Something like ‘Takkun, no admittance~’ or ‘Takkun is faking politeness[1]~’”

What role am I playing happily in her mind?

“She is so obsessed with you that she might just die if you dump her, so please treat her with care.”

After leaving Fuyuumi’s house, I decided to go back to the prep school.

If Fuyuumi realizes she forgot her bag, she might return to the prep school, since the self study classroom is still open, the possibility is there.

After listening to what Yuuki-kun said, I can’t help but start worrying.

Although I don’t know what the cause was, Fuyuumi was not her normal self this morning.

Although it is normal for her temper to turn into chariots of fire[2], the key part is what happened before that.

Who did she hear it from? She found out I was aiming for the medical department.

I have a bad premonition…..

En route back to the prep school, I saw a familiar silhouette on the pedestrian bridge.

Even from a long distance, it is obvious that her face was lacking in vitality under the streetlight.

She was leaning on the handrail, looking at the cars passing by under her on the prefectural road.

I shouted with all my might, but she didn’t respond. My voice was drowned by the cars.

—that girl, is she going to!

I ran over to the bridge.

I yelled her name and ran up the stairs two steps at a time.

I ran to her side, panting.

“What are you thinking! Tell me, what can you do if you die?”

Once I shouted, A-chan turned her head slowly.

“Takkun? Why are you here?”

A-chan stared blankly for a second, and smiled weakly at me soon after.

“Don’t misunderstand, I’m not thinking of jumping down.”

Is that so. Did I misjudge it from being nervous?

I felt worn out, so I crouched down on the spot.

“Are you worried about me?

“You’re in love with Chiwa, but you still worry for other girls?”

I raised my head and stared at A-chan.

“Why are you bringing up Chiwa?”

“The girl most important to Takkun is Chiwa right? If that’s the case, why are you so kind to me?”

This type of thinking that ranks certain relationship over others feels like the thoughts a lovestruck brain would have. I don’t like it.

“But that’s the truth, right? Compared to a promise ten years ago, a bond formed over nine years is more important, right?”

“Tell me clearly! Fulfilling your promise with Chiwa is the most important right? More important than the marriage agreement with me, right? Right?”

A-chan’s face froze out of surprise and fear.

I only realized I shouted afterwards.

“Sto-stop saying such stupid stuff; you are you, okay? You are not Chiwa. You are a disciplinary committee member, second place in our year, good at cooking; aren’t you great yourself? Don’t belittle yourself just for love!”

“Why can’t you understand? I could die for Takkun. I would do anything just to make you like me more than Chiwa. I know this is the worst, but I’m stupid. Although i’m a disciplinary committee member, I am stupid. I’m just a stupid and foolish girl who wants Takkun’s love! I want Takkun’s love! I want Takkun to like me! So I worked hard, and gave my all; even when a girlfriend appeared, I didn’t lose! Why is it still impossible? Was the winner already decided before our re-encounter? This is just too unfair, way too unfair. You want to become a doctor and cure Chiwa’s body, who can come between such a beautiful dream? If someone wanted to, won’t she be perceived as a bad person? Unfair, this is just unfair, unfair……”

Her voice turned hoarse at the end from crying; I couldn’t hear what she was saying.

I didn’t know what to do, so I just stood there.

I just wanted to help Chiwa, as simple as that.

But why did I make A-chan cry?

Does that mean, if I help Chiwa, I can’t save A-chan?

If that’s the case, what should I do?

A voice came from behind me.

I turned and saw someone I totally wasn’t expecting standing there.

She waved her hand.

She was as carefree as usual. Wearing makeup even though she’s already 40, it makes me embarrassed.

Even I myself knew that my voice was trembling.

I thought I wouldn't ever meet her again, and it's not like I ever wanted to meet her either

You still have the guts to appear in front of me in such a frivolous manner?

“Because, I’m already tired of that man, ya know~? I have no money either, and nowhere I can live.”

My mother who disappeared one year ago. 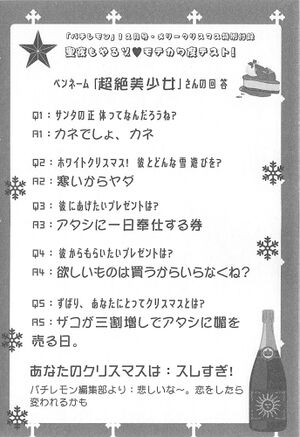 A must do even during Christmas night ♥ Popucute test!

Q1: What is the true form of Santa?

Q2: White Christmas! How would you have fun in the snow with him?

A2: It’s too cold no thanks

Q3: What do you want to give him as a present?

Q4: What do you wish to get from him?

A4: I can buy the things I want myself, so there’s no need, right?

Q5: What is Christmas to you truthfully?

A5: The day where the amount of small fries who fawn over me triple.

Your Christmas is: straying too far from the thread[4]!

Pachi Lemon Editorial Board: How sad~maybe if you fall in love things will change