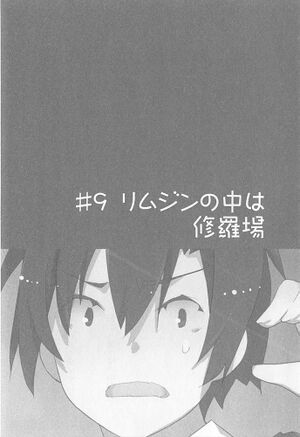 Once I closed the backseat door, the car started moving silently.

I thought he would drive recklessly like before, but the meter showed a speed that’s under the speed limit, and he slows down at the pedestrian crossing and at turns. Driving this safely is definitely better; it’s probably because the president is in his car.

The aforementioned president is sitting right beside me.

I have a lot to ask this person, but at this moment I don’t know where to start.

“Erm[1], I heard my daughter is very much under your care.”

Masuzu’s father started talking with me.

“I heard you are in the same club, what club is that?”

He should’ve heard of it before, and he’s still acting dumb.

“It’s called the ‘Society for Bringing out your Maiden Self’.”

“Maiden huh. What a befitting club.”

However, the first impression he gave me was that he wasn't sincere at all; his behavior made me suspect that he was actually thinking the complete opposite of what he was saying.

“Masuzu is known as the ‘Natsukawa’s family gem’ in Sweden, right?”

“Because you’re proud of her, you have to flaunt her off like a decoration?”

Even I knew that my voice was sharp when I said that.

Ever since Mana told me during summer training camp, it has been on my mind.

“Did Mana say that?”

“Although I can’t deny I have such thoughts, I do it because I love my daughter. This is what she wished for, I did not force it on her.”

I raised my voice.

“I heard that you separated Masuzu and her mom, and forcefully took her away.”

The father looked down, as if he’s lonely.

“Only after I talked it through with her mother did I take custody of her. This is a legal contract with concessions from both sides. I didn’t do anything unreasonable…….but, Masuzu wouldn’t believe me.”

“Why did you divorce her mother in the first place?”

I know it was impolite of me to ask, but I couldn’t stop myself.

I went through a huge shift from my parents having a divorce after all.

“Because I don’t love her anymore.”

Just, because of that?

I thought he would give a lot more reasons that sounds acceptable.

“Is it rare for a change of heart to happen?”

As if he saw through my surprise, the father shrugged.

“‘I loved something before, but it’s different now,’ it’s the same for books, movies, and food, even clothing, changing your heart towards a member of the opposite gender isn’t weird, right?”

“Clothing and people are different.”

“What I mean is, one’s thinking will change.”

The father stared into my eyes and continued.

“For example, are you still holding on to the dreams or fantasies you write in your notebooks when you were small? Can you still show it to people proudly now?”

I thought he wouldn’t know about the chuuni notebook, but this example was really on point.

“It’s the same for everyone, even me.”

The father said, as if he was consoling me.

“I heard you have a childhood friend, you and her, do you still have an unchanging bond between you two?”

I averted my sight.

“Then, what about the other childhood friends aside from that girl? Don’t you have friends that you separated from and have forgotten? Not even one?”

I can’t help but think of Fuyuumi Ai.

Another childhood friend whom I originally forgot about.

“Memories that you gave up on, childhood friends that are distant now, it’s the same with this. To love the same girl forever is really hard.”

He hit me on the shoulder—

“That’s why, you don’t need to worry about having broken up with her, don’t hold it in your heart, forget about it.”

The roundabout conversation was just a “wedge” to avoid me Masuzu and I getting back together.

“Does Masuzu and I going out go against your will that much?”

“The problem is not you.”

The father leaned on his seat—

“My business will grow bigger, and I plan to extend into more countries. I will let her attend a university overseas, and find a suitable marriage partner for her.”

He said these surprising words without faltering.

In the end it’s just a marriage of convenience.

I actually heard this development that seemingly only appears in fiction in reality.

“As long as you are born in the Natsukawa family, this is unavoidable.”

“Of course, I don’t think this isn’t a sad thing for her, so this time, I agreed to her plea.”

“She knelt on the ground and begged me for it.”

At that very instant, I couldn’t understand what he was telling me.

“She begged me. She said ‘I’ll listen to everything father[2] says, so please let me spend my three years of high school in Hanenoyama.’ And ‘Please do not take away my last memories’.”

That egoistic and proud girl, that irritating Masuzu, would kneel on the ground?

Kneeling in front of this disgusting father?

When she didn’t take my hand in front of Hime, I thought I was rejected.

When she said she wanted to support me and Chiwa’s relationship, I always thought she had some ulterior motive, up until just now I still had this thought, because I couldn’t understand her true self.

But, this one thing is definitely true.

This is the only thing that can’t be questioned.

“……actually, I still have things I have yet to say.”

I stared at the father’s frowning face, and told him.

“Actually, I am not Kidou Eita, I can’t even be considered human. My real name is 'Holy Dragon Knight of DawnBURNING FIGHTING FIGHTER'. The only survivor of the dragoons. I’m also known as the strongest warrior in the universe.

I used a polite tone[3] out of nervousness.

“What are you talking about?”

Although he was rolling his eyes, I had to continue.

“I’m not just strong, but I’m popular. For example, Ayanami Aruka, she’s an angel, her element is light, and she’s my classmate. Of course, she’s beautiful, hates to lose and stubborn, her catchphrase is ‘are you stupid?’, although she’s usually quite curt[4], but she loves me a lot.”

“Her CV is Hayashibara Yuuko.”

How is that—I tried to make that expression, but the father looked serious. Can you at least laugh?

So I tried to explain.

The father’s expression grew darker, it’s just a CV, can you hurry up and laugh.

“What exactly are you talking about?”

Irritation could be heard in his voice.

I tried to change the pace that he couldn’t keep up with.

“You said ‘Can you still show your fantasies to people proudly now?’ just now, right?”

I didn’t let go of this opportunity, and continued with my questions.

I threw away my feeling of shame.

“Yes, of course I can do that. Your daughter read my fantasies out loud over and over again; for me, it’s already—nothing. It’s like popping the blisters on a hand that frequently holds bamboo swords, in the end it won’t hurt anymore.”

“I don’t understand, what are you trying to say?”

“Some things will never change, you bastard father.”

My fist hit the seat; even I didn’t realize it.

“Indeed, ‘I loved her before, it’s different now’ does happen. But, that doesn’t mean the fact that you loved her will disappear. Besides that, future endeavors happen because of past ones. Masuzu and I are the perfect example of this. Because of my fantasies, I was able to meet Masuzu.”

“Isn’t that just futile? You have already broken up with her.”

I opened my fist.

“You and Masuzu’s mom, is that also futile?”

Different from the silence out of bewilderment just now, this is a silence from him thinking.

The car slowed down.

It stopped in front of my house, and I got down from the backseat.

“At your age, maybe you won’t understand.”

The father screened down the window.

“Human hearts will change, love will move on. This is a natural occurrence, maybe you’ll call it betrayal, but there will come a day when you will understand it.”

“That day will never come.”

I stared at the father.

“Correction, I won’t let it come.”

The window closed and the car started moving.

From the driver seat, Yasuoka-san raised his thumb from an angle that only I can see.

“Was that someone from the Natsukawa family?”

Chiwa said “really!?” and stared at the leaving car—

“I want to meet him too……what kind of person is he?”

I spat and answered.

Maybe he has his reasons, adult reasons. This kind of thing, even a brat like me can understand.

However, I can’t understand what he just said, I can’t accept it.

This is not for Masuzu.