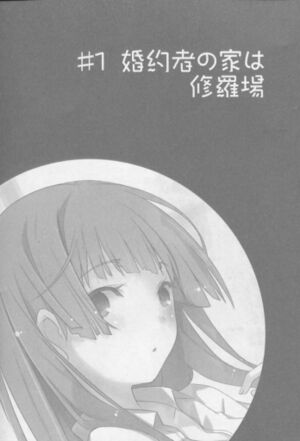 "It's okay. My dad's gone with business engagement to São Tomé and Príncipe for a while"

This was little different when I had gotten invited to Hime's room and now I'm nervous. Sweat was running down my back with weird tension. My virginity was making me act like a complete moron with bad nerves. It was totally out of control.

The bag I gave him was placed right by their sofa.

"Of course. Kaoru was looking for you too, so make sure you send him a message"

Some man knocked on the door and demanded it open with a scraggly voice.

Yuuki was standing there with a towel wrapped around his waist in a changing room. That was why he wasn't in the living room, because he was taking a shower.

"We've bumped into each other a lot tonight, Takkun-san"

"Alright then, Eita-san. But what brought you here? You came to peep at me showering?"

He was getting smart. Was he really in 5th grade? When I was his age, I was busy rummaging for smut magazines by the river. You know what I was doing with them.

"Wh-, what happened to you? I thought you were away with business"

"By the way Ai, whose shoes are by the door?"

I heard him go along with her story. He sounded very serious and sincere, just like his daughter. Ai-chan's square and straight trait must've come from him.

"My sister brought home a man on Christmas night and that's pretty considerable.

It's as if she skipped 2 steps forward to becoming a real woman."

"No, we didn't skip anything!"

"Ai. I hear a creepy sound, where is it coming from?"

"I must have left my phone in the bathroom! A lot of phones these days are waterproof!"

I appreciated Ai-chan's attempt and I managed to put my phone in mute.

I turned my phone off.

I held my breath, thinking he needed to shut up already.

I stepped out of stuffy bathroom into the hallway.

She didn't look happy as she was standing there with the unwrapped packages.

Yuuki came out with his pajamas on. He only spoke casually to his own family, I guess.

"Quit teasing me and go to sleep already. Don't you have sports practice in the morning?"

He laughed all the way to his room. Now I was able to see the side of him that was like a fifth grader.

"But he has very good manners"

Not only was she sweet but very well-mannered.

"Ta-kkun, you must've been sweating all day? Just go ahead, take a bath and wash it all off"

His papers were filed randomly in his bookcases and there wasn't even a strand of hair on the floor. I didn't even smell cigarette smoke in there. Clean sheets. I felt a lot of love from Ai-chan who had kept up with this room.

This must've been the most chaotic Christmas in my 16 years of life.

I wonder if my mom was home.

I could never agree with her idea to let her move back in with me after she had ditched her boyfriend.

NO WAY. I swore off romance altogether just to avoid this kind of Romance-Brain induced behavior.

But that exact thing made Ai-chan cry.

I again panicked like a typical cherry boy. Calm yourself down a little bit, Eita Kidou. What happened to the smartest boy in his class?

"I just can't celebrate you and Chiwa as a couple. I need to be honest even though it might make you hate me. Those are my true feelings."

What if I kept my no-romance attitude all through my life until I die.

Or would she give up on me and find somebody else instead?

Romance is nothing but a phase, like a fever. She should forget about me after graduation.

"She was like that, but up until I was in grade school my parents were deeply in love, like an ideal couple. But after they fell out of love, all that mess had happened.

"That made you not believe in love anymore is your excuse?"

"Me, ending up with Chiwa? No way. I consider her as my little sister and do love her like one, but I never had any romantic feelings."

"I don't like anybody. I will never fall in love"

"If that's so then I don't know whether to give up or not." 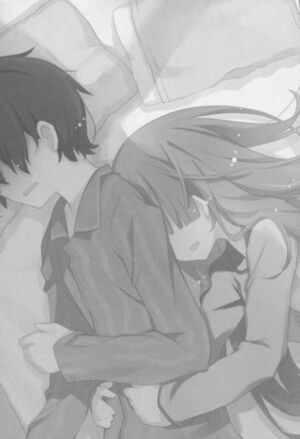 "You have to keep it after doing this to me. You don't have to wear it in front of Chiwa." 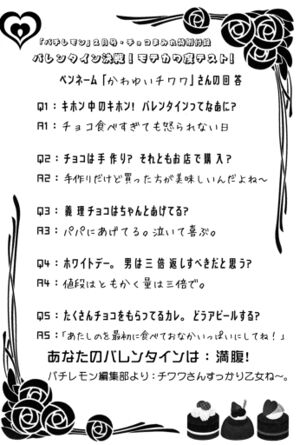