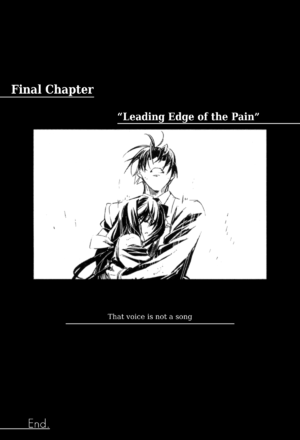 That voice is not a song

The UCAT members were slightly delayed on entering the concept space.

The concept space by the front gate was the closet to the schoolyard concept space, but there was a short gap between the two and the automatons could not leave.

That meant the first to reach Sayama were Hiba and Kazami who had just returned by helicopter.

Small concept spaces had been opened in various spots around the school and helicopters were letting off personnel inside them.

Hiba and Kazami charged into the concept space as the first of those.

Then they saw and heard what was there.

They were first met by the wind produced by something large flying.

Kazami reached a hand out beyond that pressure of the wind that blew through.

But the objects to which she referred were not there.

Just as he had said, a single voice rang through the darkness.

It was a great cry.

The extended, lonely wail was directed toward the moon.

The sorrowful voice gave the two of them chills.

And in the center of the courtyard, they saw its source.

Even though it would dirty his clothes, he sat on the ground embracing Shinjou’s scarlet-stained body.

Shinjou’s back was moving slightly as she breathed and he pressed his hands to it to keep her from bleeding any more.

His hands were covered in the color red spilling from the person he cared for most, his head simply looked up toward the night sky, and his mouth hung open.

Sayama howled. Tears spilled down his face and his hair was disheveled.

He spoke no words or anything else. He simply cried like a small child or like a beast howling at the moon.

It was as if he did not know what else to do.

His cry echoed on and on through the empty night sky where even the wind had vanished. 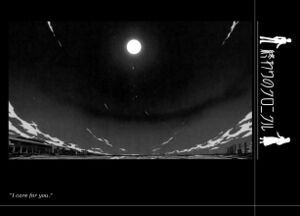 It seemed to be pleading a single word: why?