Here is the second half. Referring to a novel as “1-B” feels completely unprecedented, but I just wanted to write more and more no matter how much I wrote. I think I will continue like this, so please bear with me.

Now for a bit of information about the novel.

The derivations of the hymn Silent Night based on the original German that number in the triple digits. People sing translations in dozens of languages. This book used one of those derivations and the translation was made from there as well, so do not treat it as the real one. The history behind all this is interesting, so you might want to look into all that.

When you think about it, sixty years goes by really fast. I was born thirty years after the war and my father personally experienced it, but a lot the readers of this book are from a generation that never knew the war. Now that I think about it, a lot of you were probably born after the Gulf War… That’s right. When I think about it even further, students these days (2004) were born during the age of the Mega Drive. …You’re the Mega Drive Generation. (Not really.)

Anyway, let’s get to my chat with a friend.

“Okay, give me your commentary on the second half.”

“Bzz. Too bad. There was no licking involved. It was only grabbed and pulled!”

“Kwah! Dammit. So you found out I haven’t read it!! And what was with that suspicious last sentence?”

“Come back after actually reading it. I’ll be nice, so listen carefully: Get lost, you idiot.”

“You’re being forceful today. At any rate, I skimmed through it and read the important parts.”

“What parts did you read?”

“Hey! Someone implant something in this liar’s head!”

“Give me an X-ray vision chip if you can. Man, talking about implants really takes me back. When I was in high school, the guy sitting behind me collapsed and stabbed me in the neck with his mechanical pencil. I had the lead implanted in me.”

“It’s going to reach your brain the day after tomorrow and you’ll start convulsing.”

“No, it won’t. But that isn’t all. In elementary school, this one guy stabbed pencil lead in his arm to make a tattoo of Doraem*n. Once he grew up, Doraem*n’s face got really long and horse like. Doraem*n’s design has a lot of space below the nose.”

“That isn’t something you would want people to know.”

“No. He didn’t swim in the pool during high school.”

“This chat has veered away from the novel and toward painful stories from the past.”

“What’s wrong with that? The people reading this will be in that stage of their lives. I’m sure there will be one person bearing a tattoo that keeps growing. Talking about the mistakes of our younger days is a good thing.”

I’m not sure it’s quite that good a thing.

Come to think of it, I set up a website. Here’s the URL:

Satoyasu who I have draw for me also has a site. Here’s the URL:

And finally, there’s the site for Tenky, the company I work for. Here’s the URL:

I just finished proofreading while listening to Zabadak’s Michishio no Yoru which I used as my background music while writing this second half of the novel. 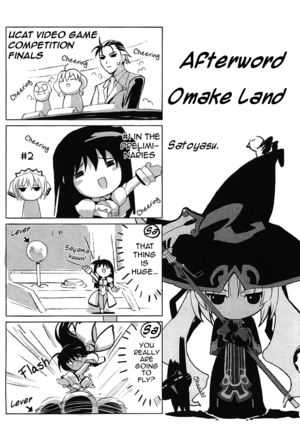 “Who exactly began it?”

I believe I will think about that sort of thing once more.

Now, I want to hurry on to the next one.