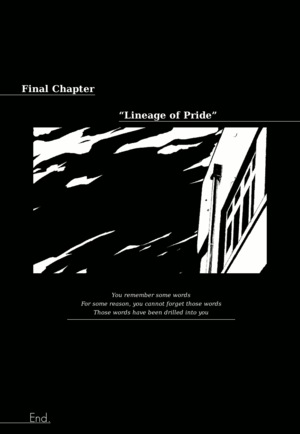 You remember some words

For some reason, you cannot forget those words

Those words have been drilled into you

Spring break was coming to an end.

Sayama stood below the midday sky on the emergency staircase on the second floor of the second year general school building.

Cherry blossoms were blooming everywhere he looked in the schoolyard below.

The flower petals fell and danced about. That told him a gentle wind was blowing.

The roads and gravel paths the petals fell on were being used by students walking back to their dorms.

They wore casual clothes and were excited to see each other once more. They ran about to check on their textbooks for their new classes or to prepare their means of inviting new members to their clubs at the entrance ceremony the next day.

Amid them all, Sayama spotted two familiar faces. Those people discussing something as representatives of the athletic clubs were Izumo and Kazami. They both wore casual clothes. They held a single plastic bag for miscellaneous items.

Kazami noticed Sayama and looked up.

She only smiled and looked away without saying anything.

Sayama raised his left hand in greeting, but that was it.

And he looked at that raised hand. His left arm had a new bandage wrapped around it. The middle finger had his mother’s ring on it.

A scar was visible on the back of the hand and he felt a phantom pain when clenching the fist.

And merely thinking of the past would squeeze at the left side of his chest.

…What happened to the people of 1st-Gear after that?

Gram had absorbed the rest of the Concept Core from Fafnir Custom and Sayama had been told it was stored beneath Japanese UCAT. It would next be brought out when all of the concepts were being released.

Currently, the half-dragons and other races that would have difficulty surviving without the concepts were settling in at the 1st-Gear reservation. Various numbers were being calculated out related to its maintenance and expansion. Once the results were in, the actual expansion of the reservation and encouragement toward naturalization would begin.

There had been damages during the battle and the responsible parties would be charged for those crimes, but Hagen had taken most of that onto himself. As long as no major rehabilitation was needed…

“They can make it up by fully cooperating with us.”

Amid all this work, Fasolt was trying to begin producing paper within the reservation. They would not have it shipped in to them. They would create their own records.

Sayama wondered if his son, the half-dragon named Fafner, would eventually follow his father down that path.

Their history and pride was no longer passed down orally. This change of medium would allow it to spread much wider.

The words Sayama had exchanged with that dragon would be passed on in the background of reality.

He had decided to always fight seriously from here on.

He thought about the battles to come that would surely be recorded by someone. He thought of his opponents and his comrades.

He looked up into the sky and his thoughts finally turned toward that white mechanical dragon.

…Did my words reach him?

He suddenly looked down from the sky and behind him.

There was a wall to the side of the emergency exit. The sand of the schoolyard had washed over it and hardened from the wind and rain.

He reached out his left hand and touched it.

“How sentimental,” he muttered with no smile in his voice.

He removed his finger from the wall, took a step back, and sighed.

Just as he did, footsteps rang from the emergency staircase.

He looked down and saw long hair swaying as someone walked up the stairs.

Perhaps because of the springtime weather, he wore a white short-sleeve shirt and brown shorts. He held a small box. He looked up and walked next to Sayama with a smile.

“So this is where you were. I was looking for you.”

“Well,” said Shinjou as he placed his elbow on the railing and opened the box.

The box contained two small shortcakes. Shinjou gave a small smile and looked up at Sayama’s eyes from below.

“This is to celebrate me moving in. …Sayama-kun, you seem to have been busy since your wound worsened and then you came back. H-here. I know it’s late, but don’t you think this kind of thing is important?”

A celebration, hm? thought Sayama. Come to think of it, perhaps we should celebrate 1st-Gear joining with UCAT.

There were things yet to be dealt with and imprudent comments would likely be made.

But it was spring around them. The wheat in the field of 1st-Gear’s reservation would be growing nicely and the flowers would be blooming brightly. Spring was an excellent season for celebrations.

After thinking through all that, Sayama smiled bitterly. He thought it was about time he got back to his life.

He looked Shinjou in the eye. He observed those black eyes. And…

“Yes. Later, I will give you some celebratory items as well. Like a video game system.”

A smile appeared on Shinjou’s cheeks and he gave a pleased sigh.

“Let’s get back to our room. That left arm makes things difficult, right? I can feed the cake to you.”

He followed Shinjou down the stairs and passed by a group of footsteps heading up.

Those footsteps belonged to the members of the art club.

A group of about twenty in casual clothes was going up to the roof.

They were likely going to sketch the scenery from there. They held drinks and snacks sold only at the school cafeteria as well as sketchbooks and boxes for art supplies.

With slow footsteps, their speaking and laughing voices continued upwards.

Sayama saw a certain girl at the tail end of the group.

She was wearing her uniform and she stopped with an expressionless look when she lined up with Sayama.

She had a small bird on her shoulder and a black cat at her feet. She held a sketchbook and art supply box in her right hand. She held a small box with food for the bird in her left hand.

The others went on ahead, leaving only Sayama and Brunhild behind.

She realized Sayama was looking at the sketchbook and she averted her gaze somewhat.

“I thought I would try drawing Low-Gear’s scenery starting today. …I finished the oil painting I was working on before.”

“Yes, I saw it. It is hanging in a hallway of the faculty building, isn’t it?”

“Yes,” confirmed Brunhild and the bird tilted its head on her shoulder.

After a few seconds, Brunhild opened her mouth while still looking away.

She tried to say something.

But some footsteps returned to the landing as if to stop her. They belonged to a girl in casual clothes.

“President, we’re going on ahead.”

Brunhild jumped in surprise, raised her head, and looked behind her.

“Okay,” she said with a nod before turning her back to Sayama.

But then she stopped moving.

Her pause was due to some music.

Organ music could be heard in the springtime air. Sayama and Brunhild recognized the song.

It was Silent Night.

“What…?” muttered Brunhild and the girl on the landing smiled.

“President, have you never heard this? It’s because you always close yourself up in the art room. Whenever he has a break, old man Siegfried from the Kinugasa Library plays that song. Apparently, he started two years ago.”

But that was all.

She continued up the stairs.

She silently climbed the stairs. With the black cat and small bird with her, she walked up next to the girl who had called to her.

She turned around at the landing and Sayama continued watching her until she disappeared around the next flight of stairs.

He then made his way down the stairs without speaking.

Shinjou was waiting for him at the first floor entrance down below.

“What took you so long?” asked Shinjou when he saw him, but he was smiling.

However, as Sayama walked up next to him, Shinjou got a look at his face. The smile disappeared and he tilted his head.

“What is it?” asked Sayama while continuing to walk.

“Well,” said Shinjou while following him. “Did something sad happen?”

“Your sister probably knows. …I am sure she will tell you one day.”

Saying nothing more, Sayama wrapped his arm around the shoulder of the person walking next to him.

“Ah…” said Shinjou, but he did not resist.

Sayama took a breath and drew Shinjou in closer.

He could feel the warmth and softness of Shinjou’s body, but having Shinjou entrust his body to him like that gave Sayama a certain thought.

…This is a most welcome thing.

Sayama looked up at the sky as he walked. Cherry blossoms scattered like snow through the blue sky. 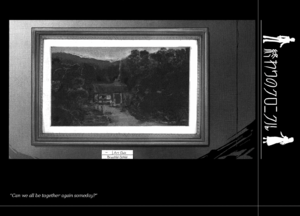 Shinjou nodded in his arm and he felt a small squeezing in his chest.

While thinking on those two things, Sayama looked even further up into the sky.

Had he managed to do something?