Hello. Ahead Series – Owari no Chronicle 2 <B> is complete.

Oddly enough, this one is even thicker than the last one, but I think the length will stop here. This happened because there is so much I want to write, so I thank those of you who have stuck with me.

Now for some information about the novel.

Judgments concerning the firebombing of Tokyo change a lot depending on the book you read, but I have treated it as it was represented here. I was a student during the fiftieth anniversary of the event, so I had an easy time looking up information, but I’m not sure how easy it would be now. Also, there were bombings all across Japan, so you might find that scars of the war exist beneath your feet if you look into it.

By the way, it seems my father experienced an aerial bombing while swimming in a river. According to him…

Yeah, I would think so.

About the back cover, this entire Chronicle will be the first episode of Ahead, so even this second story is treated as the 1st. In that respect, it is no different from City. Thank you for understanding.

Anyway, let’s get to the usual chat.

“Good morning, producer of strange statements. I am willing to listen today, so try saying something.”

“You’re the same as always. And when have I ever said anything strange? I demand a correction.”

“Fine. I’ll make a correction, so make sure not to forget it.”

“Thanks. I haven’t had any fish lately, so I don’t have any DHA for my brain.”

“You tell your cat to eat fish but don’t eat any yourself?”

“Don’t tell me how to eat. Are you my wife or my mother? Anyway, we’ve veered way off track, so what should we do?”

“I did. Once again, there wasn’t much of the cat. Both halves of this story were terrible!!”

“Can I ignore that?”

“Feel free. The part about shooting beams from the hand was great.”

“Have you tried it?”

“You’ve tried something else!?”

“Yes. One time after waking up in high school, I did the Shoryuken in the middle of my room for some reason. The move worked perfectly, but I broke the fluorescent light on the ceiling and ended up covered in blood.”

“Oh, yeah. The invincibility goes away at the top of the ascent.”

“I botched the landing and fell onto the shards scattered on the floor. Then when I writhed in pain, I cut myself even more. It was horrible.”

“Doubling the points with an additional attack, hm? But why did you even do that?”

“I was probably tired after studying for entrance exams. I blame Japan’s educational system.”

“There’s definitely something wrong with an educational system that produced someone like you. And I’m getting the feeling that no one I know has any normal memories about their school days.”

“I get the feeling that we’re not talking about the novel at all.”

“Then say something about it. Something other than the cat.”

No, it isn’t. And is that really where we’re ending this?

Anyway, my background music while working this time was Sada Masashi’s Kanpaku Sengen (I love the lyrics).

“Who maintained their lie to the end?”

You can think on that.

Now that the groundwork has been laid, the next volume will head further out and accelerate.

September 2003. A morning with a beautiful moon. 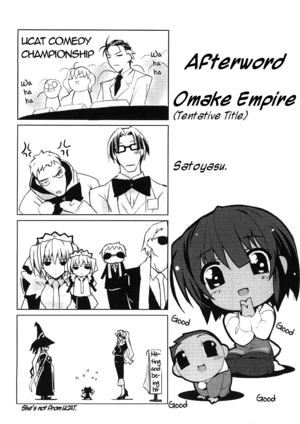 Bottom text: She’s not from UCAT.