Final Chapter: That Which the Wind Conveys[edit] 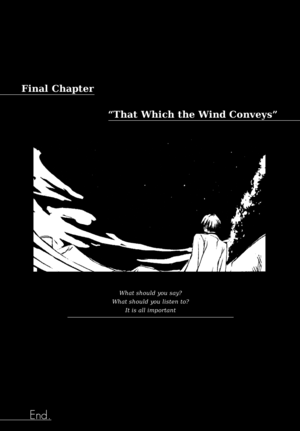 What should you say?

What should you listen to?

It is all important

Kashima arrived in Okutama before the first train of the morning.

After leaving the concept space in western Tachikawa, he had met up with the group handling the cleanup and had them arrange a ride to Okutama station.

He was feeling quite nimble. He still felt some pain in his healed right hand, but he felt that pain served to wake him up.

He walked through pre-sunrise Okutama on his way to his parents’ house.

His parents were certain to be awake already.

This was the day they would begin planting the rice, so he had to decide whether he would help them or not.

“Either way, Natsu-san will want to help.”

He gave a bitter smile and remembered all the times he had helped in the past.

…I would plant the rice with my grandfather back then.

He recalled the sensation of his feet sinking into the wet mud up to the ankles.

…Maybe I should help.

The development department would essentially be taking the day off and it was the start of May, so he could take a few days of paid vacation with just a phone call.

And once that vacation was over…

Team Leviathan would surely begin negotiating with the other Gears.

He remembered the boy and girl who had descended Susaou hand in hand.

Susanoo and his princess had chosen the windy land of Izumo. He was certain they would acquire several more Concept Cores to present to heaven. And someone needed to make the equipment and weapons that would aid them.

He nodded once, hid that thought deep in his heart, and changed his focus.

…I need to hurry home.

If his parents were up, Natsu and Harumi would be as well.

Harumi had a way of crying when he was gone, so he hoped she was not causing too much of a problem.

He hurried along the sloped road leading through the forest.

He turned a sharp curve and found the site of the accident before him.

But this was not his destination. He wanted to continue up the hill and reach his parents’ house.

Hurry, he thought as his legs picked up speed.

And then he spotted someone in front of the slope that he had punched the other day.

A woman in a shirt and jeans was sitting on the guardrail in front of it.

She held Harumi and her shirt buttons were loosened, exposing her right breast.

Her narrowed eyes suddenly noticed him.

She trembled and stood up. The ring on a chain around her neck swayed.

She raised her voice and began to approach, but then she blushed with a look of realization.

She looked down and found her visible breast and Harumi’s sleeping form.

Her pace slowed and her expression grew troubled. She was unsure whether to prioritize Kashima, herself, or Harumi.

Kashima approached with a bitter smile.

He looked around to make sure no one was around and reached for her chest.

He touched her breast and moved her bra and nursing pad back into place.

She gave a ticklish groan and Kashima gave her a troubled look of his own.

He buttoned up her shirt and then spoke.

“I assume you were on an early morning walk, but what would you have done if someone other than me came along?”

“Eh? Th-then I would have taken the situation more seriously. Fortunately, I don’t know anyone here.”

“Then why did you panic so much when I came along?”

“Because I don’t want you to think I’m indecent…”

As she blushed and narrowed her downturned eyes, he sighed.

He was unsure what to do, but she nodded toward him.

And then the two of them began walking.

“Your parents are already awake. They said we would eat after I returned from my walk.”

“But I wanted to eat your cooking.”

“I will prepare the extra meal.”

She narrowed her eyes again and gave a pleasant laugh.

She then tilted her head.

“Are you not going to ask why I’m here?”

“Yes. I know you will understand even if I do.”

She was a very indirect wife, but her smile contained no ill will.

Kashima thought as he walked alongside her.

…And you don’t ask what I’ve been doing. Even though you can tell something happened to my hand.

The reason she did not ask had to be the same as the one she had just mentioned.

“We are Yamata Takeru and his princess,” muttered Kashima while he narrowed his eyes toward Natsu.

He wanted to tell her so very much.

About the near destruction of the city visible in the distance.

About his grandfather and his comrades ensuring the destruction they underwent did not happen again.

About his grandfather’s feelings and the engineer who had responded to them.

About how he had sought power and caused an accident while pursuing her.

And about the battle that had occurred the night before.

But he felt he did not have to tell her.

This was the same as Susaou.

That iron giant stood within the concept space in the city behind him. No one knew about it, but even if it was forgotten…

…The fact that he saved this world will not be lost.

Even if all of it was forgotten, it would not be lost.

Kashima used his bandaged right hand to embrace the shoulder walking alongside him.

“Nn,” breathed Natsu as she brought herself close while still holding Harumi.

Suddenly, the wind blew in from behind them.

The wind came from the east. That powerful wind told them it was morning.

“The sunrise,” said Natsu as the morning light appeared behind them.

In the blowing wind, she tilted her head and looked behind her.

Beyond the forest, she should have seen Tokyo’s cityscape.

“Huh?” She narrowed her eyes. “For a moment, I thought I saw a giant figure in the middle of the city.”

Kashima gasped, but then closed his eyes and assumed she had seen wrong.

But he still opened his mouth and chose his words carefully.

“I will.” She nodded and narrowed her eyes toward the rising sun. “How strange. Tokyo is covered in a morning fog, but the sunlight makes it shine gold. It looks like something out of my father’s picture books.”

“Does it?” Kashima took in a breath. “Then Susanoo must be protecting that land.”

“Yes,” she said with a slight smile.

And the wind blew between the two of them.

The easterly wind was still cold that time of year. Not long after the rice was planted, the rainy season would arrive, shortly followed by summer.

The beautifully clear sky would soon become humid and thick.

The wind of Kusanagi that traversed the land and swept across the plants would become the wind of Murakumo that produced the rain of the rainy season.

Kashima did not know the answer, but he had a feeling he understood.

…Is that how it works?

As he watched the wind leave, he remembered something.

He remembered what he needed to say to the person he was walking with.

He decided to say the phrase which had been on his mind throughout the battle.

When he turned around, Natsu was looking at him. Her head was tilted and she waited for him to speak.

He opened his mouth and spoke to her and the child sleeping in her arms.

…Easterly wind, wind of Kusanagi that will eventually become Murakumo, are my words reaching you? I am no longer denying the power of 2nd-Gear that you left behind. But…

“I have returned to the two of you.”

As he spoke, Natsu nodded and Harumi opened her eyes.

Natsu smiled at the small voice.

That smile indicated something important to her and she now turned it toward Kashima.

With slightly damp eyes, she followed his name with two simple words.

These precious words were the reason he yearned for the ever-changing wind that travelled everywhere.

Natsu spoke those words in her quiet yet certain voice.

And he wondered if the wind was listening to her words. 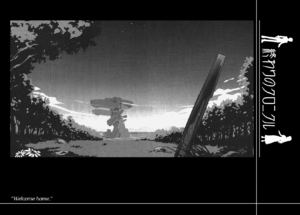