Chapter 40: Words of the Night Sky[edit] 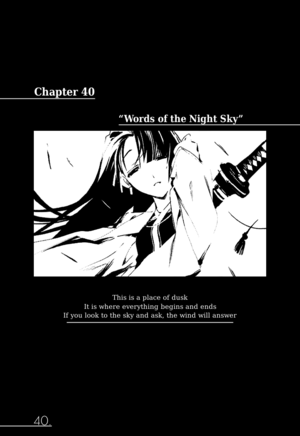 This is a place of dusk

It is where everything begins and ends

If you look to the sky and ask, the wind will answer

Sayama watched as everyone prepared to withdraw.

Georgius was no longer emitting light.

…Did it react to the Concept Core?

He had questions, but he had no way to investigate them. When combined with the documents Tsukuyomi had sent him, he had a lot to think about.

He was currently looking down the street while a short distance from the others. The people formed a ring around Susamikado in the middle of the street and Miyako lay unconscious at the god of war’s feet.

The automaton head maid placed a blanket over her.

According to the short-haired automaton who seemed to be the head maid’s younger sister, Apollo’s pulse could be heard inside the cockpit ejected from Typhon. Also, it sounded more stable than before.

According to the maids’ prediction, the output created by Keravnos’s Concept Core combining with Typhon’s may have been used to recompose Apollo’s body. Artemis had remade him using the past experience of recomposing him within Typhon.

…So the princess who could not have children still managed to leave behind someone important to her.

However, it would apparently take time for the recomposition to stabilize. It could happen in another fifty years, after several thousand years, or even tomorrow.

They were loading the cockpit block onto a truck to carry it away. Typhon’s wreckage was loaded onto a cargo pallet with a truck connector and it was stopped at the end of the road by the station.

Just as he began to wonder what would happen, Shinjou spoke from his left.

“I wonder what’s going to happen.”

He turned around and found her with a smile, so he nodded expressionlessly.

He then heard an unfamiliar female voice.

“Yes, what is going to happen?”

“But have you realized that none of this is over yet?”

Sayama frowned at the voice.

…I have never heard that voice before.

There was another odd fact about the voice as well: its location.

It came from the direction of the cargo pallet carrying Typhon, but its height was strange.

As he turned, he heard a sound.

It was a quiet whistling of wind.

But despite being quiet, it carried through the air and everyone turned toward it.

A giant form had appeared just a few meters above Typhon and its cargo pallet.

“A mechanical dragon!?” shouted Gyes. “Are you the one Aigaion and Cottus informed me of just before their shared memories cut out!?”

Everyone was looking at a steel-colored mechanical dragon floating in the air and a girl standing on its back.

The girl’s black hair whipped in the wind and she wore a giant Japanese sword on her back.

Her sand yellow combat coat waved in the faint wind.

“Do I need to introduce myself?”

As Ooshiro crawled forward because of his bad back, he held out a camera.

“Oh, dear.” The girl tilted her head down to face the camera. “I am Nagata Tatsumi of the Army.”

Everyone turned toward it as it turned around to face the girl.

Hiba’s voice trembled as he continued.

But Tatsumi did not reply. Her smile simply deepened as if to say she could not hear him.

Everyone who saw that smile was left speechless and Sayama saw them take a step back.

An excellent smile, he thought while embracing Shinjou from the side because she began to step back as well.

…So she is an enemy.

But Shinjou suddenly tilted her head and frowned.

“The Army is rumored to be a mixture of a few different Gears, right?” She drew back her head a little and spoke quietly. “But doesn’t that Tatsumi person’s Cowling Sword look familiar?”

It did. He had seen it earlier that day in the documents Kashima had sent.

“That is the Cowling Sword that Director Tsukuyomi’s late husband left designs for.”

He nodded and looked to Shinjou. She gathered strength in her shoulders and nodded with Ex-St in hand.

They both stepped forward and he expressionlessly began to speak.

“I do not believe we have met. I am Sayama Mikoto of Team Leviathan.”

Tatsumi and Sayama exchanged bows and Sayama asked the first question, but it was not directed at Tatsumi.

“Gyes-kun, a question. Who are they? Answer as quickly as possible.”

“They are an organization named the Army. An information broker known as Hajji is their leader. They have gathered the remnants of several Gears and try to invite others to their side. Today is the first time I have seen any of their main force outside of Hajji.”

“Leave it at that, Gyes. This may be my first time to speak with you, but let me say this. …Now that you have lost to Low-Gear are you going to wag your tail and forget everything the Army has done for you?”

Gyes glared at Tatsumi, but she ignored it with a shake of the head and turned back to Sayama.

“Listen. 3rd-Gear and the Army have an agreement. If their Concept Core is taken, they will give us Typhon. So I’m sorry, but we’ll be taking it using this mechanical dragon.”

“I see. And what is the mechanical dragon’s name?”

Rather than Tatsumi, it was the dragon that nodded in response.

“I am a mere mechanical dragon and nothing more. As such, I regrettably have no name to give at this point in time.”

“It sounds to me like you actually want to name yourself.”

“Do you dare look down on me!? I made a promise to not name myself as Alex!”

He nodded and Shinjou poked at his side with Ex-St.

“I think we might be able to make friends with him.”

“What are you talking about, Shinjou-kun? I am friends with everyone in the world. With myself above them all, of course.”

He turned back to Tatsumi and did not hesitate to face her smile and gaze.

“I have a question for you, Tatsumi-kun. What if we did not allow you to take Typhon?”

“The fact that Team Leviathan interferes in and breaks agreements made between other Gears will spread.”

“But I thought the Army does not belong to any Gear.”

That question silenced Sayama. It was true that they had no proof that the Army did not belong to a specific Gear. If it had begun in Low-Gear, one could even say it belonged to Low-Gear.

Tatsumi laughed at his silence.

“What a clever boy. Interesting too. But it’s time. If I don’t return home and get to sleep, I can’t supervise everyone’s training tomorrow morning. I have low blood pressure after all. Okay, Alex.”

“Tatsumi, why are you using my name when I forbade you to!?”

“Oh, I’m sorry. I can be forgetful. …As can you.” She spoke completely casually. “For today, we will take Typhon and leave.”

The mechanical dragon nodded and moved.

It descended in an instant and used its four legs to grab the white god of war that was held down by chains on the left and right.

Despite the extreme weight of the god of war, the mechanical dragon tore the chains apart and easily lifted it.

“I abandoned that name. I now go by Tatsumi.”

Tatsumi smiled toward Hiba, but that expression vanished for just an instant. When Sayama noticed, he glanced toward the spot she had looked at in that moment.

A single jeep was parked far beyond the circle of people. Inside it were Sf and two other people.

As he thought that, wind blew in from behind. Diana’s usual smile was missing and Itaru was the same as always, but they both slowly looked up into the sky.

As if chased by their gazes, the mechanical dragon flew into the sky.

Gyes clenched her teeth because her god of war was still destroyed.

In no time at all, the dragon vanished into the sky and left only wind behind.

Everyone held their breath as they looked into the night sky and saw the moon there.

However, Sayama gave a firm nod, turned toward the others, and lightly raised his hand.

“If they had an agreement, we will respect it. Just like us, our enemy views that sort of process as important. By using the proper process, they are attempting to gain the same justification to their actions as ours.”

“It is simple, Shinjou-kun. Doing this gives them a certain possibility. They can oppose us, defeat us, justify their own actions, and place our actions on the wrong side of history.”

“We and the Army will be fighting to place the other’s actions on the wrong side of history. That is what this means.”

Those words placed a nervous look on everyone’s faces. Among them all, Kazami and Izumo nodded.

But one light voice spoke up. It was Ooki’s and she clapped her hands.

“Oh, but Sayama-kun. And everyone else too. Doesn’t this mean something else as well? The enemy may have taken Typhon, but that means we know something about what they can use to fight.”

There was a slight pause before everyone reacted.

And that delayed reaction was a bitter smile.

“I suppose so,” said Izumo as he crossed his arms next to Kazami. “And Team Leviathan now has someone crazily powerful to run errands for us. That certainly is reliable. After all, he’s an underclassman who can buy us coffee at supersonic speeds. He’s our errand master.”

“I will not have Mikage-san summon Susamikado just to go buy things!”

“Then you’ll go buy them on your own?” asked Mikage’s voice.

The slight movement of the black god of war produced bitter laughter from everyone. As their tension left them, they sighed and Sayama looked across them all.

“At any rate, it seems the enemy is terribly insensitive.”

He turned toward Miyako who was wrapped in a blanket and held in the arms of the maids. Everyone else followed his gaze.

“Now is the time to be wishing her the best, and yet they had to bring up that agreement. Let us show our own sensitivity by forgetting our job and celebrating this night. And most likely celebrating the new form of 3rd-Gear.”

“Yes.” The head maid nodded with a smile and looked across the crowd while embracing Miyako. “We will accept you all. Also, we wish to gather and continue on with all of you. After all…”

She looked up into the sky.

The moon floated in that chilly and empty night sky.

Whatever she was thinking, her eyebrows lowered, her eyes narrowed, and she spoke the names of those who had vanished.

“We believe that we will never meet our end.”