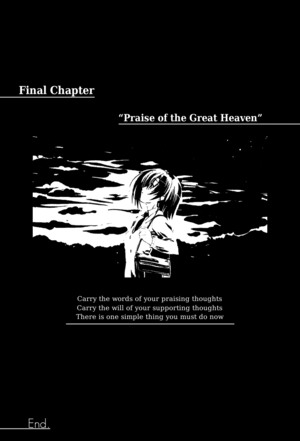 Carry the words of your praising thoughts

Carry the will of your supporting thoughts

There is one simple thing you must do now

The evening summer sky extended above the green mountains.

Scarlet light colored the mountains from a shallow angle and those mountains filled with harsh contrasts of dark and light.

A winding river ran through the shadows and some giant white buildings were located in front of one bend.

They belonged to IAI’s Tokyo headquarters.

The scarlet-dyed buildings and the vast grounds of the facility were surrounded by walls and a gate that were also filled with scarlet.

The sun set late that summer evening, so business hours were already over.

A single person passed through the wide main gate: a woman.

Her semi-long black hair was swept back and she awkwardly wore a beige suit.

She was Tsukuyomi Miyako.

She lightly lowered her head toward the guard at the front gate and checked her watch and she left the grounds.

The only sounds were the river running down below and her own heels clacking on the asphalt.

After exiting through the gate, she looked to the bus stop a short distance to the left.

She carried a bag over her left shoulder and she brushed a hand through her hair.

There was only one thing on her mind.

All of the automatons had been taken to Japanese UCAT’s western headquarters located underneath IAI’s headquarters in Shimane.

After some formalities were dealt with there, they would be allowed to contact the other automatons in Kanda and be scattered within UCAT which possessed the concepts automatons needed.

A strange old man named Ooshiro had told her all that. He had also said they would accept that the Moirai and other automatons had human rights, treat them as a group, and not disassemble or examine any that did not volunteer to do so.

Gyes was especially cooperative and she would apparently be allowed to participate in UCAT in some form.

Her two fellow models had been defeated by the Army, but Moira 1st had said the following:

“She wishes for a master and an organization to serve more than the rest of us because she wants something to support her as she fights.”

Gyes could leave the concept spaces and she had said she would visit Miyako’s home before long, but Miyako was unsure how that would turn out. She has a habit of lecturing people, thought Miyako. When they had parted, she had gotten on Miyako’s nerves by insisting on countless things such as giving her child a good name.

…I hope I don’t end up more or less having two moms.

She had a feeling that fear would come true.

However, there was a lot she did not know.

The cockpit containing Apollo had apparently been brought to the western headquarters, but she did not know how that would turn out.

She also did not know what those who had fought on that battlefield would do now.

To meet them, she would have to join UCAT and face the battles there.

…And 3rd-Gear’s will most likely desires that.

She looked to her left shoulder. An envelope of UCAT documents poked out of the bag there.

“If I use this to join UCAT, it feels like I’m using my parents’ connections.”

“If I want it and others want it of me…”

Where was it she should go? Who was waiting there?

As she thought, her heart grew a little heavier.

In order to brighten her mood, she turned toward the western sky where the setting sun sank behind the mountains.

She found a fairly bright scarlet there. It was sinking, but she still could not look directly at it without holding out her hand.

The name Apollo appeared in the back of her mind. He was the young man with the same eyes as her and he was the father of the child within her.

…When will that idiot come back?

She did not know. For her sake, Moira 2nd had said “eventually”, but it could be thousands of years in the future.

She did not like that thought and she no longer tried to reject how she truly felt.

She looked to the brightness of the sun.

“But the sun and the moon can’t be out at the same time.”

She felt as if her heart had grown even heavier.

As she did, she suddenly took a shrill breath.

Her breath caught in her throat and she could not stop the trembling in the corners of her eyes, her lungs, and her shoulders.

Her emotions threatened to spill out.

She looked up in an attempt to contain them. She looked to the evening colors in the heavens above.

She swore toward that sky, but then she saw something unexpected.

It was the moon.

A thin white crescent could be seen in the sky that was dyed purple by the sun setting in the west.

She then recalled a certain fact.

“The light of the moon is a reflection of the sun’s light.”

They were sometimes both seen in the evening or morning. And even when the moon could not be seen in the sky, the sun’s light was still reaching it.

“You idiot… You’d better hurry back or we won’t be able to see the moon in the night.”

She forced a smile in only her eyes and she looked back down.

The setting sun to the west and the moon in the heavens illuminated the mountains, the river, and the distant cities. The shadows of contrast created by that scarlet light looked beautiful to her.

But what about her? Did she illuminate her surroundings like that? Or was she the one illuminated by them?

She suddenly brought her left hand to her stomach and thought about the child.

…What should I name it?

She could not check with him, but he had left this with her. For the time being, at least.

If she used characters meaning something like that, would their child become a child of 3rd-Gear and Low-Gear?

Or should she think about it differently? She could also give the child a name to make it more honest than them and make it bless many more people than they had.

She thought about a lot and suddenly reached her left hand for the envelope of UCAT documents sticking out of her bag.

Just as she began to pull out the papers that would determine her destination, a sudden sound of an engine passed by her from behind.

It was the bus from the Akigawa area. It was on its way to Oume and would pass through Ikusabata where her home was.

Before she could even cry out, it arrived at the bus station up ahead.

She began to run and her heels rang loudly.

But she brought her right hand to her stomach and slowed down.

She began walking calmly and without rushing.

She did not hesitate to raise her voice as she grabbed the bag containing the UCAT envelope and waved it up toward the sky that contained both the setting sun and the moon. 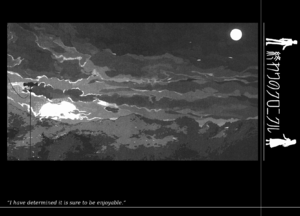 “I have determined it is sure to be enjoyable.”