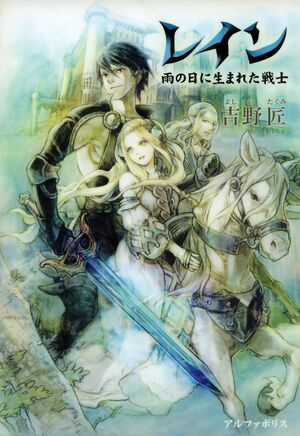 Rain (レイン, rein) is a Japanese light novel series by Takumi Yoshino, with illustrations by Megumi Sumikawa. Currently there are 10 volumes in this series. Volume 10 was written in the form of an email magazine to subscribers over two years, finished in Feb. 2013, and later published in paperback form. Currently, the author has started writing volume 11 via the same method.

Murgenia, a continent located in a different world.

Not yet fallen to the hands of the Scientific Revolution, this land continues to pass down with care the fading magics of it's ancient days. It is a world ruled by sword and sorcery —

A long time has passed since the war which engulfed the whole of Murgenia. Yet the precariously maintained balance of peace approaches its end.

Zarmine, a large kingdom located in the northern part of the continent has been reborn with the coming of its new king.

Unsatisfied with the small power he wields, the desire for conquest consumes him. Under orders from this king who knows no equal, the Dark Army begins its invasion, turning many countries to the flames of war.

Among those preparing for invasion is a small country located to the south west of the continent, known as Sunkwoll.

The military strength is not even one tenth that of a large country. The will of the soldiers shakes. The king pours out lavish luxuries upon the nobility, without regard to the welfare of his people.

It seems as though the destruction of this small, weak country Sunkwoll…is imminent.

The Rain series by Takumi Yoshino

If available, you will find the PDF, EPUB and/or MOBI version(s) of the Volumes in the forums here. If you are interested in sharing your version in any format please post in that topic.

All editors who speak English proficiently are welcome.