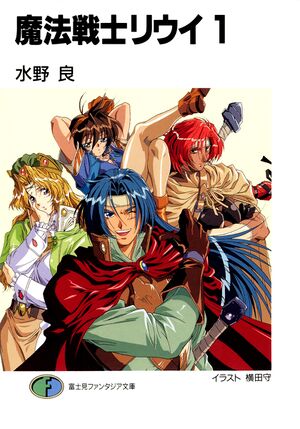 Rune Soldier Louie (魔法戦士リウイ, Mahou Senshi Louie) is a light novel written by Mizuno Ryou and illustrated by Yokota Mamoru, which features soldier Louie as the hero. The series takes place on the continent of Alecrast on the world called Forcelia, and is related to the novel, anime, and manga series Sword World. It is a sibling series to Record of Lodoss War (which is also written by Mizuno), taking place on a continent north of Lodoss Island. The first series was released from October 1998 to February 2002. The series, sequel and sidestories are 21 books in total. An anime with 24 episodes aired from April to September 2001.

When an all-female adventuring team needs a mage, the only one they can get on short notice is the burly adopted son of the head of the local mage guild. Not only does Louie look more like a fighter than a mage, he acts like it, too, getting into all manner of trouble and trying to solve it with his fists. And when the team's cleric learns that her god has assigned to her a special relationship with Louie, well, let's just say she's less than happy.