This title was licensed by YenPress on July 04th 2019.

The Seishun Buta Yarou Series (青春ブタ野郎) is a Japanese light novel series written by Hajime Kamoshida, illustrated by Keeji Mizoguchi and published by ASCII Media Works on their imprint Dengeki Bunko. The author-illustrator pair have worked together in another well-received light novel series, Sakurasou no Pet na Kanojo.

The Seishun Buta Yarou Series series is also available in the following languages: 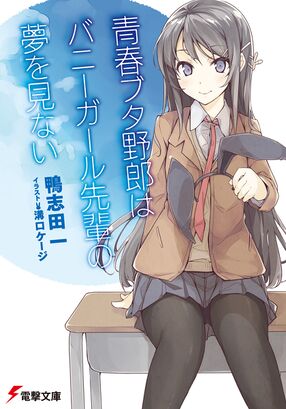 She who was teasing me with these seductive words temporarily disappeared before my eyes.

There could not be a bunny girl inhabiting a library. Azusagawa Sakuta faced a scene that toppled common sense—he encountered a bunny girl, and she is nowhere a normal bunny girl. She is Sakurajima Mai-senpai, a student studying at the same school as Sakuta and a retired yet renowned actress. It was said that starting from a few days ago, those around her could no longer see her anymore, and she came to the library just to confirm this. Is this related to the hit topic on the internet, the unimaginable phenomenon known as "the puberty syndrome"? Sakuta, wanting to know the reasons behind and get closer to Mai, decided to solve the puzzle. However, the situation then developed in an unexpected way—?

In the city surrounded by the skies and the seas, the romance story of I and she began.