Difference between revisions of "Sekai no Owari no Encore:Volume 1 Epilogue"

Epilogue: The Knight of Reincarnation

The town of the blazing cliff Jio.

At the visitor’s room of a large auditorium——

“Don’t go panicking. Burns like this will only take a day to heal for a Dragon like me.”

Ren who took off the bandages wrapped on both his arm and Kyelse who put disinfectant on him by force.

I’m glad everyone returned safely. Ren felt shy saying that so he stopped himself and hid it with a smile.

“But I was shocked. I would have never imagined that you would defeat Achendia just by yourself. Even if you had a spirit support you and even though you had Elline’s sword while her guard was down……”

The Dragon Princess shook her head as she tightened the cap of the disinfectant bottle.

“Well, she didn’t even see me as a threat the whole time. She saved her strength the whole time since she knew there were strong people left such as you, Fear-senpai, and Elise. I couldn’t even damage her at all with my own sword.”

Kyelse sat on the chair and took the glass on the table with her hand.

“No matter what situation you were in, it’s also the truth that you made one of the Five Great Disasters admit defeat. I wasn’t shocked simply because she was taking you easily and you fought with unexpected strenuous effort. The reason why she reserved her strength was because she knew you would be an opponent who she could defeat with ease while holding herself back, right?”

To reserve your strength by controlling your spell-power. The Demon General made such judgment that it would have been enough against Ren.

But Ren’s potential power and growth rate surpassed her expectations. That was the reason why Achendia admitted her defeat without revealing all of her strength.

“If there was one thing I fear about humans.”

“Then that wouldn’t be the population of the human species but their growth speed.”

“……She certainly said something along those lines.”

“That Demon is very calculative. Or perhaps she thought of the possibility where she would fight you again in the future. There’s a chance that she believed revealing all her powers to you now would be dangerous.”

Maybe one day this fake Brave Hero would actually reach the height of Elline.

“Well, for me, a rematch against her would be a bit……”

The sound of a soft knock echoed on the door.

The one who appeared on the other side of the door when Ren opened it, was a black-haired girl who looked up at him nervously.

“Are you that girl from back then?”

Right before Ren climbed the Great Volcano. This girl, who was left behind in the burning mansion was the one he saved.

The girl bowed at him and ran through the passage.

“What’s wrong? Why the senile face?”

“Yeah……well, it was the first time I saved someone and had been thanked for. So for a moment, I wasn’t sure whether the “thank you” she said was directed at me.”

Ren leaned on the wall and replied with a bitter smile.

As if responding to that answer.

“Oh my, it sure is amazing outside! It turned into a carnival outside! Or rather, we are a hot topic throughout the town. As a four-member party who defeated the Five Great Disaster.”

The door opened powerfully and the one who entered the room was Elise.

“Ehehe, I even had people ask me for a handshake when I was walking through the street.”

“……Is that even okay? For a former Demon Lord to act in such a light manner.”

“It’s fine~. Because I retired already. Well, if I was an active Demon Lord then I would act as such. ——Oh, and about what you were talking about just now, Ren.”

“The discussion about you defeating Achendia. I have good ears so I heard it from the corridors.”

The dark-skinned girl who approached him while skipping.

She gazed at Ren with eyes brimming with curiosity.

“Anyway, let’s get along from now on. The issue I was concerned about has been dealt with so I will officially be joining the party.”

To help her against the Five Great Disaster who had rebelled. That was the condition Elise gave to join the party and to find the Encore together with them.

“I’m also looking forward to it, you know? Ren, you weren’t acknowledged by the humans, right?”

“I’m sure you realised it yesterday but Achendia certainly acknowledged you, Ren. So she realised that you weren’t just a lookalike of Elline.”

Elise said it while pouring hot milk which she was very fond of.

“You are being too hasty.”

Kyelse said it while drinking sips of her apple juice.

“Though we would be troubled if you don’t reach his strength one day. I would be the one training you. So you need to become strong enough to overwhelm the Five Great Disasters, the Demon Lord, and the Goddess of Heaven soon. You would need to accomplish it within three months.”

The moment Ren sighed, the one who entered the room last was the blonde girl.

“I have made my return now.”

“You took your time. Weren’t you just supposed to report the defeat of Achendia at the town's sanctuary?”

Fear chuckled and smiled. What she had under her arm was——

“It’s the newspaper extra. It was being given throughout the town free of charge. Don’t you reckon the ones being hasty are these people?”

She gave the two-sided article to them. Ren, Kyelse, and Elise looked at each other after they read through the content.

——The boy who may be the reincarnation of Elline and the three lovely girls.

——The party, the “Knight of Reincarnation” defeated the Five Great Disaster.

“The parties gathered in this town of Blazing Cliff would scatter throughout the world once again to find the Encore. And the “Elmekia Dusk” would most likely give their report about us at the supreme metropolitan.”

“……So the information on this article is known throughout the world now?”

He was more embarrassed than being happy about it.

And more than that, the content of the article was so exaggerated it made him turn red.

“More importantly, Fear-senpai, what’s this the “Knight of Reincarnation”?”

“Do you remember we registered our name as anonymous? It won’t look good if it was put on the article so the news agent made up this name on their own.”

The blonde Archangel showed a rare sight of putting on a bitter smile.

“So it means “the Reincarnation party of the Elline Sword Emperor Brigade” was what was important to them.”

“Woah. That’s too much for an exaggeration……”

Regarding Ren, they drew a portrait of him which was probably that of Elline. The three girls on the other hand had detailed information given from the witnesses which was put on the article. 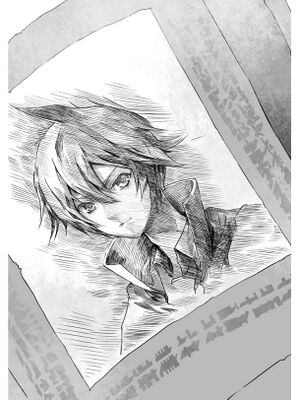 The party name and the exaggerated comments. There was no way the world wouldn’t give their attention to them.

“Let them say what they want.”

Elise said it in a light manner while drinking her hot milk.

Instead, it seemed like she was enjoying this situation.

“No one would actually think that you are Elline’s reincarnation. Even the three girls they mentioned here. They would never guess that we are the actual ones. Except, it would have to do with the fact that it was a good coincidence for them.”

“But that’s also, you know…… Like being used in order for them to make hot topics.”

“Then we simply need to teach them. Let’s prove it to the world by finding the Encore before everyone, the whole world, and the other parties.”

The one who gave such answer was——

Kyelse, who was standing by herself near the window of the visitor’s room.

The Princess who stood at the top of all Dragons.

While she had the breeze blowing her hair back, the girl quietly smiled.

“Let’s prove to them that we are the ENCORE“reincarnation” of the Brave Hero who saved the world in the past.”