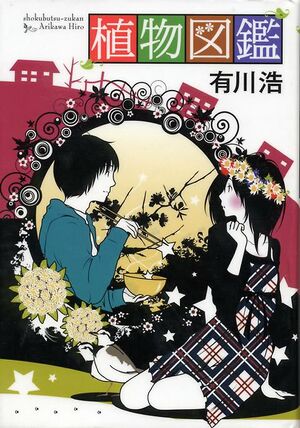 Shokubutsu Zukan (植物図鑑) is a light novel written by Arikawa Hiroshi (有川浩) and published by Kadokawa Shoten (角川書店). It is illustrated by Kasuyanagato (カスヤナガト). It is originally a love novel hosted on from Kadokawa web novel house sari-sari (ケイタイ小説サイト「小説屋 sari-sari」) from June 2008 to April 2009.

On one day, a captivating boy appeared on the road.

"My name is written as the tree (樹), pronounced as Itsuki. Miss, if you don't mind, may you take me home? I won't bite, and I'm well-mannered."

This was all Sayaka heard from this gorgeous male stranger, but this was enough.

Their everyday lives together gradually became irreplaceable. Let this flower bloom, and this relationship grow!

Through the growing weeds and flowers on the road, the sweetest, deepest, newest love novel is born!