Hello everyone, I am Totsuki.

Coming up next is a spoiler about this volume's story, so please be careful.

The newest character in this volume is the most devilish in everyday life in a certain sense and might even be something that dear readers have encountered.

As a side note, I have no paranormal senses at all so I've never had any experiences in this area.

Neither have I visited places rumored to have paranormal phenomena.

Perhaps it serves me right, after all, I seldom pay respects at my ancestors' tombs either, so I've never had a chance to encounter them. Naturally, I have no wish of encountering them either.

Although I'm very scared, the main characters I write about are completely opposite. Instead, they are characters who either possess the same superpowers or can defeat monsters directly.

When going to video rentals, I don't really like going near the special shelves for that genre.

But when I pass by, I check out the box out of curiosity.

Yes, it happens almost exactly the same as with Rushella.

As soon as I look at the box I begin to regret it.

Occasionally, I would pop it into the player and feel like dying when it finishes with a bad ending.

So, as a child, I basically watched horror films while hiding behind my father's back.

Yeah, it's quite similar to Rushella in the story, although my appearance is worlds apart from hers.

Oh right, my father was totally unafraid of ghosts and monsters.

In his words, that's because he knew what was truly the most terrifying.

My father always spoke in a very direct and upfront manner and never said anything resembling famous quotes. But for some reason, these words of his left a deep impression on me, and I used it as this story's theme.

What is the scariest monster?

Hisui did not fear Rushella and the other girls and even treated them as ordinary people and got along, perhaps because he knew the answer to that question.

Oh well, for a scaredy-cat like me, whether the most scary or the second scary, or even not scary, in any case, horrifying things, please stay away from me.

Because it's very scary, after all.

Also, currently, the most scary things are deadlines and failure to get reader support.

In that case, fictional monsters created by humans are not worth fearing at all.

Even with that notion, I still ignore the horror section when walking past it in the rental shop. Seeing psychic shows on television, I silently switch off the TV.

A man with a clear conscience has nothing to fear.

In order to dispel the lingering fear in my heart, I will have Hisui try his very best.

If it's him, he should be able to face any situation calmly.

What sort of suffering will he face next time? Please look forward to it, everyone. 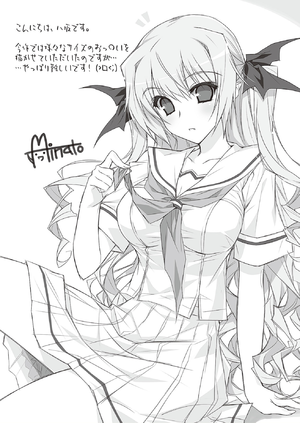 Hello everyone, I am Yasaka.

For this volume, I had to draw bosoms of various sizes... It's actually quite tough!