After school, in front of the school gates under the setting sun, Hisui remarked with heartfelt emotion.

Everyone present shared the same feelings.

Ever since the incident was resolved, the wound had vanished from Touko's neck and her lingering regrets were released.

Her time to pass on should have arrived.

Everyone wanted to see her off but were at a loss... After pondering it over half a day, they finally gathered here after school.

Hisui and Rushella shared their feelings honestly. After all, since they were seeing off the dead, they both carried a solemn expression.

"Perhaps this isn't appropriate to say to a ghost, but take care."

"We will... Take good care of your tomb and offer flowers."

"You are an amazing person. Despite the great suffering, you still managed to pull through in the end. Please be proud of yourself."

Touko maintained her smile throughout.

If she did not, she would probably be in tears instead.

"...These past days, I've been very happy. Perhaps even more happy than when I was still alive. It's quite weird, right?"

"I can't really laugh at that joke."

"Fufufu...... Then I should be going. Everyone turn around and I'll take this opportunity to head towards the next life. It's embarrassing to be watched... I might end up crying."

Everyone nodded and turned their backs towards Touko.

Once they all turned around, she was going to vanish.

Their ghost senpai from ten years ago as well as the one who had sought their help.

The five of them also waved... Holding back their tears, they remained silent.

After the long and silent farewell, everyone turned around.

At this moment, the setting sun shone upon their faces.

Touko was no longer present.

Gone to the afterlife.

That was the way things were supposed to go.

After all the preparations.

The mood was also totally brought out.

But in the shadows of the school gates, hiding from everyone, twiddling her fingers at a loss, a translucent and beautiful girl was furtively looking over at them. Was that Hisui's imagination or just someone who looked similar?

Amidst the awkward atmosphere, Hisui went over and brought Touko out from her hiding place and led her before everyone.

She seemed to realize she had committed a serious crime.

Touko's eyes were tearful but those tears were clearly not because she was touched.

"Uh, well... It should come naturally... Rising up towards heaven, slowly disappearing into the air......"

Saying that, Touko was about to cry.

Indeed, rising up into heaven might be a bit difficult for someone with a fear of heights... However.

"Say, Touko-san, you should not have any lingering regrets, right? The incident is all resolved... Could there be more regrets you have remaining from your life?"

Indeed, the problem probably lay in eliminating those lingering attachments.

"Lemme see... I've always wanted to eat all the crepes in one go at the crepe shop near the station without worrying about my weight... Also ice cream at the cafe! Also there's that, the dozen or so little charms I've always wanted to try out, such as having a happy marriage in the future... Oh, I still want a boyfriend! I've never met one during my life... After I get a boyfriend, I'd like to prepare handmade lunchboxes for him, go out on dates, etc......"

......If they continued to listen, she would probably talk all the way till the next morning. Exasperated, Hisui asked Eruru:

"...In any case, I think we should just observe for now. Since she has done good deeds, we cannot just exorcise her."

"In the end, this development occurred?"

"In the end, this development occurred."

At least, none of the items on her wish list included passing on.

Hisui and Rushella silently exchanged glances and nodded together.

Standing in front of Kirika at the same time, they bowed their heads in unison.

An intricate magic circle was carved on a certain desk in an empty classroom.

Although it pained one to damage school property, for the sake of a certain student, there was no choice.

After all, that student had already died ten years ago.

"Hey hey, this is so mean! You're going to force me to live in this room!? Drawing this kind of magic circle to affix me to this desk!!"

"Don't worry, this desk is simply one of many foci in the entire school for anchoring your existence. Similar foci are located in other places in school so you can move around freely within the grounds."

At Hisui and Rushella's request, Kirika had separated Touko from Hisui's body.

Hence, she had now legitimately anchored the existence of this earth-bound spirit to the school, allowing her to begin a new life.

Even though she was already dead.

"So mean... Then I can't experience romance like this!? Hisui-kun, I guess I'm not attractive enough!?"

"Hmm, you're already dead so that's out of the question. Better luck in your next life."

Ignoring the sorrowful Touko, the aimless club activities started up as usual today, centered on the club president.

"Don't worry, Touko. One day, I will help you to pass on properly! Okay, we have a new member. From now on, you too shall devote your utmost efforts to recovering my memory and improving the quality of my bloodsucking life!"

"I really hate nodding and agreeing every time I hear that sentence......"

Hisui retorted against Rushella's declaration as he welcomed the newest club member.

However, shaking hands was still not possible.

Because his hand passed through.

Hence there was no way to hold firmly.

Literally a ghost member of the club, Fuwa Touko.

With a list of worldly attachments so numerous that she could chatter about endlessly, the day of her passing on seemed forever distant. 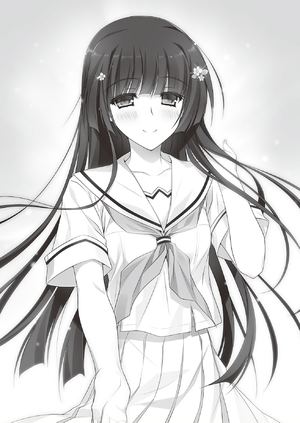