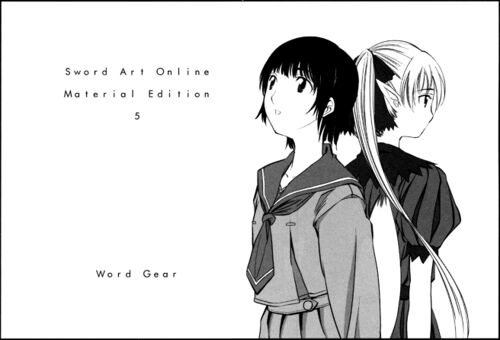 Glancing at the side of Kazuto’s face who breathed the complaints in a miserable voice, Suguha tried not to laugh and raised her voice,

“Not yet! Only twenty more!”

Two people continued swinging their shinai in the harsh cold weather of the morning. For Kazuto, swinging three hundred times every morning is still very tough. Despite saying ‘Can’t~’ or ‘I’m dying~’ every few minutes, he still continued until the end. His willpower is what Suguha always looked up to.

This morning Kazuto somehow finished swinging too, after passing the shinai to Suguha, he walked to the veranda and lay on top of the plank. Smiling at the scene, Suguha wiped both shinai with a cloth while leaning next to the black pine trunk. She pulled a handkerchief out of her jersey pocket and wiped her sweat, relieving her breath.

A few days ago, the yard was still covered in snow, but it had disappeared completely due to the recent continuous fine weather. Suguha noticed the earth in the planter, which was arranged alongside the graveled path that turns from the yard to the door, was already dry. She then mercilessly said to the dying body at the veranda,

“Onii-chan, fill up that watering can and bring it here~”

Several seconds later, Kazuto lifelessly replied ‘Kay~~’ and got up, he pulled an old watering can from under the veranda, collected water from the tap at the corner of the yard and handed it to Suguha. She received and tilted it at the planter, fine droplets of water came showering a curved line, accompanied by a light sound.

Kazuto asked, squatting and glancing at a small flower with a pale orange color in front of him.

On hearing Suguha’s answer, Kazuto poked a petal of the adonis while deep in thought.

“At our house, this flower blooms the earliest. ……But Onii-chan, why are you interested in the flower?”

“No… It’s just that ‘that side’ also has a similar flower. ……How about this planter? It looks empty.”

“Oh, in that one I’ll sow Salvia seeds when spring arrives, then they will bloom in the summer.”

“Salvia…… what kind of flower is that?”

Finishing the watering, Suguha showered the remaining water in the can at the base of a black pine, then answered with a surprised voice,

“It bloomed every year didn’t it? It’s red and when blooming, they look like many small goldfish. Onii-chan, when we were young, you always removed the flower to taste its nectar and caused mother to get angry every time.”

“Ah—— you already forgot about it. I was sad my share was gone too.”

Realizing she inadvertently said an unnecessary thing, Suguha shrugged and stuck out her tongue.

A grin floated onto Kazuto’s face.

“The one mother was angry at wasn’t me but you, Sugu. I think she said ‘Didn’t we agree no more than three per day?’”

“Haha, caught me, you remembered it so well. Even these days it is still a mystery to me how sweet the nectar from Salvia is.”

He stood still but his eyes suddenly went wide open.

Suguha looked up worriedly at the Kazuto’s face, who muttered words she couldn’t understand. Suddenly, he closed the distance between them while looking into her eyes. Suguha’s heart fluttered, trying to hide her hot cheeks, she hastily jumped a step backward.

Kazuto grabbed Suguha’s arm, who was still unable to grasp the situation, and walked quickly toward the eaves of the main building.

“Don’t ask yet, just sit on the pannier rack.”

He pulled out his mountain bike and removed the number lock attached to it.

Suguha complained while looking down at her green school jersey, but Kazuto just smiled and said,

“That is appropriate for the roadwork anyway.”

“They use cooler looking jerseys for that! ……It really can’t be helped then…”

After saying her point, she sat down on the rear carrier of the MTB with her arms wrapped around Kazuto’s waist and clung on tightly. She began to worry that he would hear the sound of her heart which was currently beating like an alarm bell.

When Kazuto forcefully stepped on the pedals, the sound of the wind put her thoughts to rest and the back wheel kicked a pebble, causing a small sound. The MTB started gaining momentum, and once it went past the front gate, began to run.

It was already past eight, being a weekday, there were lines of people walking on the road outside of the station. But the bicycle that both were riding on headed in the opposite direction from the flow. Suguha felt the people they passed were smiling at the siblings, she buried her face behind Kazuto’s back and quietly said,

“T..This is embarrassing, Onii-chan! How much further are we going?”

The bicycle went on steadily until the outskirts of the residential area, even though the rear carrier was made of metal, sitting was comfortable because the MTB’s wheel was supported by a thick suspension.

It was around ten minutes on the bicycle when they reached the back of a small shrine, Kazuto put on the brakes. They were at a corner of an old residential area, by then it was already quiet without pedestrian traffic.

There was no answer to her question, Kazuto got off the bike, Suguha also jumped off the rear carrier. She put her hands on her hips and said,

“……Now, explain it properly already, is there anything at this shrine?”

Surely this lonely shrine must be Kazuto’s destination. Just as she thought that, Kazuto crossed the road to the opposite side of the shrine. There stood the gate to a solitary luxurious house.

“……? Is this the house of your acquaintance?”

Suguha stood next to him, the house exterior was built with tiles of red bricks and a palisade painted in white enclosed a large garden which was covered in a color of dried straw. There was a small child who was waiting for its parents on a red tricycle.

Suguha looked up to Kazuto’s face, wanting to ask her question again, but eventually, he shook his head slowly.

“No…… I don’t know this house. But here…… It was a wide vacant lot and it was full of grass.

Phew, he breathed loudly with a slight smile.

“Vacant lot……? Is there something at that place……?”

“I don’t understand, we came all the way to this place just to look for a vacant lot―?”

After self-concluding, he turned back, Kazuto shrugged and started walking to the bicycle. Suguha watched his back and when she was about to follow him——

A bright blue scene had filled her vision.

One corner of the lawn was enclosed with bricks, it was a small flower bed. In the middle was cold resistant plants spread with deep green leaves, and hidden within —— there was a dense short grass with a large amount of blooming small blue flowers.

Suguha’s voice reached Kazuto, who was looking at the flower bed next to him.

“There are hundreds of species within the Salvia genus, this one is a Blue Salvia species. But, it’s strange……”

When Suguha tilted her head, the back door of the big house opened. A young lady wearing an apron came out, her long hair was tied in a pony tail, in her hands was a shiny tin watering can.

The ladies eyes widened a little when she saw the siblings, she then immediately smiled while approaching them and said,

“Are you two from the neighborhood?”

“Is there anything I could help with?”

Blocked in front of Kazuto who struggled with his words, Suguha quickly said,

“I think these Salvia are very beautiful!”

“But……normally Salvia won’t be blooming past December, right? Are these a special kind?”

“Ah…… I also think it’s strange. Even though they’re a perennial plant, in November every year the flowers would already start to fall off, but this year even past new year, the flowers are still there…… Unfortunately, I don’t know if these are normal Blue Salvia or not……”

“These Salvia were already here before my house was even built, during the construction we had to move them slightly. But every year after that they are still blooming healthily here.”

Suddenly Kazuto shouted, causing Suguha and the lady to be surprised.

Kazuto hesitated for a bit, then timidly said,

Suguha was astonished upon hearing an unexpected answer while the lady who embraced the watering can at her chest wore a big smile on her face.

“Is that so, then these flowers must have been waiting for you. Ah……wait a moment.”

The lady bent over to put the watering can down, then walked quickly into the house. In a short while the figure reappeared with a small shovel in her right hand, she lowered the white plastic pot in her left hand to the ground.

While Suguha and Kazuto were watching, the lady dug the shovel into one corner of the Blue Salvia bunch and carefully pulled three stumps out, then put them into the flowerpot. She brought a vinyl bag from her apron pocket and put the flowerpot into it. With a smiling face and both hands holding the bag, she offered it to Kazuto.

“Let’s split it, please take this.”

“It’s alright, the flowers will surely be delighted too.”

“……Thank you very much. Then I’ll accept your kind offer……”

Kazuto lowered his head while accepting the bag. The contents shook slightly and Suguha’s nose was tickled by a faint aroma.

“Well then, feel free to visit anytime. In spring there will be a lot more blooming.”

Kazuto bowed his head again to the lady who began to sprinkle water with the watering can, then began walking.

Still not understanding the situation, Suguha bowed and followed Kazuto.

Kazuto didn’t ride the bicycle, instead he pulled it with one hand and started walking. Next to him, filled with curiosity, Suguha quickly asked him,

“Wait, Onii-chan, what’s going on? You really planted those!?”

Kazuto stopped the bicycle in front of the stone steps after walking half a circle around the shrine perimeter. His face went slightly red, ‘Ah~’, ‘Uu~’, cleared his throat with ‘Ahem ahem’, then he suddenly offered the bag in his right hand to Suguha.

“It’s from seven years ago.”

Still not understanding, Suguha tilted her head while her glance was filled with questions.

“……Seven years ago…… On Sugu’s birthday. You wished to gather a lot of Salvia to get its nectar, so I bought some seeds with my allowance and planted them at that vacant lot. But later I couldn’t find the road to the shrine, I spent a while searching and eventually gave up. At that time I was very sad….. Then, this time I found it in one go. A child’s memory is really unreliable.”

Suguha’s eyes opened wide, she shyly averted her gaze from Kazuto’s face. Her chest felt tight with the various emotions that had overflown within her heart.

Stretching out her right hand, she gently pulled a Salvia flower which peeped out from the bag’s opening. She received the droplet that came off from its base with the tip of her tongue. It was faint, but the vivid sweetness quickly spread inside her mouth —— At that moment, Suguha felt the flow of the many years of time she spent with Kazuto breeze through her. Before she realized it, two streaks of tears had already flowed passed her cheeks and dropped to her feet.

Suguha jumped into Kazuto’s chest, who had faltered due to sudden panicking. Both hands wrapped around his back, she embraced him with all her strength. Before long, she felt Kazuto caress her head gently. Cheeks still pressed on to Kazuto’s chest, she whispered quietly while the sweetness was still lingering in her mouth,