Epilogue: At the End of the World

“Because you hope for others to listen, don’t you?” Sayo’s voice came.

Until she said this, I never noticed myself muttering at all, and it seems I blurted it out subconsciously. This is really embarrassing. I hastily cover my mouth. Before I know it, I have an embarrassing habit of ‘telling a story’, and this is to allow me to merge into this world that’s hard to survive in, given how I have difficulties getting along with society.

Right by me, Sayo smiles at me.

I don’t like that understanding look at all, but unfortunately, I don’t have the strength to fight back.

“Takkun, there’s no way you can be trash. You love humanity too much for that.”

“In the end, you couldn’t kill anyone. What’s with that knife wielding? Even without moving, you wouldn’t be able to aim properly.”

“Didn’t I tell you already? To rely a bit more on me? Hey, tell me more about your story.”

I always wanted to ask her this,

“Are you standing on my side, Sayo?”

She has been encouraging me, helping me, got me to meet Sanae. She had been on my side the entire time.

“Because I had been cheering you on.” She shows a teasing smile, “My name’s Sayo Fujimoto. I was abandoned by my real parents, and my uncle, the Principal, single-handedly raised me.”

My family secret’s so secretive, not even Sanae knows about it, Sayo chimed in.

At that moment, I realized why she was so secretive.

She was raised by that Principal who was so passionate about education, and surely she was extremely outstanding, able to fish out news from her uncle, and greatly benefited Sanae in her research.

At this point, she starts to say,

“I heard from my uncle of a certain middle school boy’s family background and thoughts, the brave boy who didn’t want to admit anything to anyone and continue to live on strong. Thus, I have been cheering him on the entire time, you know? I didn’t expect him to be the boy crying at the food court.”

“I told you not to mock yourself now. I feel somewhat similar to you, since I was coldly abandoned by my own parents. I heard how to dared to face this world greatly, and was encouraged by it. Even now, I’m endeared by your efforts.”

Just as she was on the bridge, Sayo embraces me, but with more tenderness, and says to me,

“This world isn’t filled with as much despair as you think, Takkun. I love you, so don’t say that you’re trash again.”

Within her embrace, I can’t move a finger. My body weakens, lost with regards to everything. I never had such an experience in my life before, but for some strange reason, it seemed nostalgic.

Something seems to be breaking away in my heart.

I want to yell, but there’s a strange feeling, and I can’t voice out.

All my memories, starting from my childhood, start to scatter in my mind like firecrackers.

I was ignored by my parents, kicked around at any given moment, and slept outside every night, shivering. Nobody taught me how to bathe, and nobody bought decent clothes for me. During elementary school, nobody was willing to approach me. Whenever I cried, “we shouldn’t have given birth to you.” I was always told. When serious, “I’m trash.” I was forced to sit before the mirror and mutter that. Once I was ten, all the housework was shoved onto me, and as long as I did something wrong, I would be thoroughly beaten up. So many times did I want to kill myself, and I earnestly wanted to vanish from this world.

“Don’t just disappear man. There are still people on this world who want to know you.”

A certain boy seemed to have read through my thoughts when he said this to me,

“…Don’t do this.” I say, “Why love someone like me…such consolation is completely meaningless.”

From within my heart, I growl, wanting to erase such pointless hope.

But because I obtained Sayo’s love, I had an impossible delusion pass through my mind, so much which it’s not self-loathing.

What replaces it is a foolish possibility in my mind.

Masaya’s final will was overly cruel, ”Taku Sugawara is the devil”, those were the words written, and no doubt it would raise a sense of justice to everyone in the world. However, was Masaya really the type not to admit his own mistakes, someone who would unreasonably determine others to be guilty? No, that genius’ not that stupid as a human.

The message Masaya left for me was weird. ‘Traitor’—it sounded like I was the one who broke the promise, Masaya abided by it, right? Or it meant that only Masaya didn’t betray the ‘TakuMasa Alliance’ formed from twisted families.

Only one answer alone can solve these two mysteries.

That Masaya destroyed my family utterly, releasing me from my parents.

Such a stupid delusion lingers in my mind. How is this possible!?

“Also, this isn’t the redemption I ask for…what I want is a different ending…”

In my memories, where I was never loved by my parents, my inner wishes become my life support. In the classroom, I spent days with no interaction with anyone, and my wish became purer.

I hope to be mocked, to be despised. As long as they can stay by my side, I’m willing to do anything.

I hope for others to look at me.

I hope for others to speak to me.

Anything will do. All I wish is to speak to ‘you’!

“What I wish for, actually, that alone would have been good enough…”

I utter, and I have difficulty breathing. My eyes heat up, and my muscles shiver all over. A second later, and tears gush out of my eyes like a dam. I can’t help but cling onto Sayo’s clothes.

I already decided not to cry.

Sayo gives me a kind smile, and embraces me in her clutches.

Feeling Sayo’s body warmth, I cry for a long time.

Trash won’t be able to get a happy ending. However, the way this revolution ends isn’t necessarily a completely bad ending.

Because this ending is so warm.

At the end of this long revolution, this is the one answer I find.

So surely, I will be able to gain happiness. 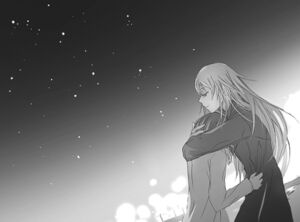