The Aladdin on the Toilet 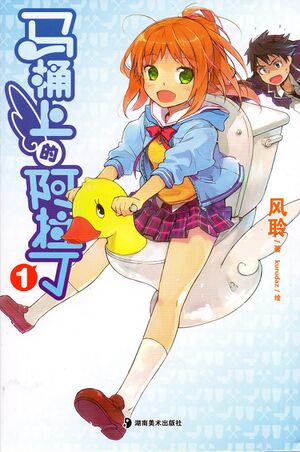 The Aladdin on the Toilet (馬桶上的阿拉丁) is a Taiwanese light novel written by icecream (風聆), with illustrations by kurudaz. It won the silver award in the 2009 Kadokawa Light Novel Contest. The first volume was published in June 2009 and ended with the fourth volume in June 2011

"Congratulations for being the ten-thousandth user of this toilet!" I won a big prize just by pooping in school! Listening carefully, I found out that the toilet under my butt was talking! In fact, Aladdin, who got the wonderful oil lamp back then, turned the lamp genie into numerous small genies to let his children and grandchildren to have a share of the power. But they didn't cherish the power and changed them to commodities for their own convenience—certainly including toilets! And these lamp genies can grant wishes of owners who used them the ten thousandth time! However, these lamp genies do not grant wishes for nothing. Once the power is used up the owner must rub the oil lamp again...Eh, I should have said the toilet. Having known the 'oil lamp successor' in the Geographical Club, I discovered that owning an oil lamp wasn't exactly a good thing. Strange things came in one by one. Who was the 'princess' that the mysterious person mentioned? What was the wish that Aladdin made back then?

The The Aladdin on the Toilet series by icecream[edit]