The Reunion With Twelve Fascinating Goddesses 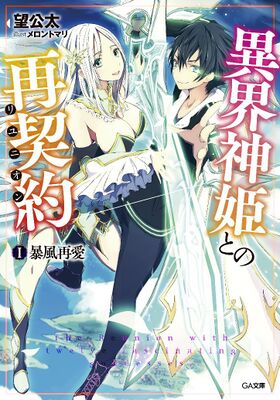 The Reunion With Twelve Fascinating Goddesses is also available in the following languages:

A young man named Kurosu Tooi was summoned to another world.

He commanded 12 beautiful goddesses to defeat the demon king in order to return to his world.

After one year. He returned back to the other world but, 10 years passed there-----

“Did you fall in love with my breasts?”

His otherworldly comrades have aged.

However, the [Nebulosa12 Goddesses] Tooi released are on a rampage in every parts of the continent.

“Cry in joy, Tooi Cross. The enemies this time are the women you loved.”

His strongest servants are now his strongest enemies. It’s time to save his scattered comrades; in his 2nd coming to the other world, he has to fight, talk and make them fall for him! Let the curtain unfold, for this an Reunion fantasy of obtaining the strongest Goddesses (Heroines)!

The Reunion With Twelve Fascinating Goddesses by Kota Nozomi[edit]