The World God Only Knows:Volume 1 Prologue

Prologue: God and the Devil[edit]

Just like a beautiful dance. Just like the movements of a martial arts’ master. But it was not splendid, nor was it swift.

It was done naturally.

Even though he was only moving his arms naturally, it looked like after-images were appearing. Exactly six arms. All moving smoothly. An oriental god such as Ashura exists.

With these six arms, he held godly powers.

However, he looked too meek for someone as great as Ashura.

"Ah! The way he creates these foreshadows. This artistic skill.....this scene writer does quite well each and every time!”

As this boy grew joyful, his expression softened.

"Haha, it seems like you are wavering quite bit. Kiriko......however."

And his hands slowly approached the controls in order to give the command.

"Do not worry. I, the God of Conquest, will surely save you from this infinite loop."

"Come now, Chitta! Face the heavens and depart to the skies. Your Thunder Fleet is waiting."

His murmurs leaked out.

Yet it was like a poet singing the lyrics to a song.

As his clear eyes narrowed,

As if he was holding the conductor’s baton, he held up his hands in front of his head.

With those words came elegance.

"Everyone! Everyone! I’ll capture you all!"

All of the ending themes flowed simultaneously. All flawlessly calculated. Building the situations up with one aim, being in complete control of the production company, the length of the story, the heroine's voice’s on/off and beyond, he was able to bring everything to its ending in one go.

Existing in this world is the hand of a God who does not waver or get confused.

The boy leant against the back of his chair, giving a sigh because of his tiredness.

He said this as if he's an artist being showered by applause.

They could be heard.

From beyond the monitor, countless rescued heroines cried out his name.

The God of Conquest.

The God of Conquest.

His name is Katsuragi Keima! 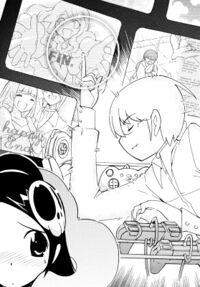 And that one part from beginning to end, the girl gazes from behind, sighing as she lowered her shoulders.

"Why does he always have to be playing a game?"

After that, she inhaled deeply and shaped her hands like a megaphone and...

The boy shouted out instantly.

The boy, Katsuragi Keima, who had quickly finished six gal-games just now, leapt into mid-air, with his heart beating quickly as he grasped his chest.

He confirmed it was her and then dropped his shoulders,

"I've told you over and over not to enter my room without permission!”

He pointed his finger at the girl named Elsie.

She was a lovable girl with sweet-looking eyes.

Contrary to her innocent appearance, her true identity was a demon from Hell who ascended above ground because of the Runaway Spirit Squad. She gave off a displeased 'Uh~~' as her lips turned sour.

"But, Kami-Sama, it has already been long past noon. If you don’t eat anything, you’ll ruin your health.”

Keima crossed over his arms and looked away.

"All of that is nothing to me. I get all of my nutrition by playing games regularly."

Keima then stood up from his chair.

"Since I am taking a rest, I wouldn't be hesitant to go up against reality."

He pushed up his glasses with his fingertips, making his eyes shine.

Though baby-faced, he was a young man with a composed expression. Katsuragi Keima. People called him by the alias "The God of Conquest", the one who is able to make any girl (of the game world) fall for him.

Asked by the female demon Elsie to gather escaped spirits, he went through his days that he's a bit unwilling to go through.

That is why Elsie had started to understand some parts of Keima's personality.

She said as her eyes were fixated on the six screens.

"Kami-sama can truly make any girl fall in love with him at his own free will."

She said in admiration.

As this was something that is not too difficult for Keima to do, he shrugged his shoulders lightly,

"That's because I'm the God of Conquest."

So he said without showing any sign of getting worked up. Being drawn into this, Elsie asked,

"...I've been having a bit of a doubt, but can Kami-sama capture any type of girl you like without any discrimination?"

Without any facial expression, Keima firmly looked at Elsie.

Elsie said as she took notice of the fantasy-world girls in one of the screens,

"Even these girls who live in a world that is completely different from reality?"

"....These girls have wings on their backs, right? Are they fairies? Also, this girl who has a tail and animal ears...."

She (Elsie) said as she looked up.

She fidgeted around in hesitation.

"How about a demon?"

Keima smiled. Though a bit cold, it was a mysterious smile that was filled with a kind of kindness that tolerated Elsie's ignorance.

He clenched his fist tight.

"A GOD! It doesn't matter even if it's a demon, I'll capture all their hearts!"

Without thinking much, Elsie applauded. She was really moved. Even though she didn't actually understand at all, Kami-sama is amazing!

And the obedient Elsie nodded deeply, and finally,

This was one thing she really wanted to ask,

".....even if you dislike it? Kami-Sama also has feelings. You may oppose capturing them because of your pride or, how should I put it, are you prepared to capture a girl even if she leaves a bad impression on you easily? Isn’t there a girl like that?"

"....bodily nourishment. I’ll go get myself fed and return to gaming. Next time, don’t enter my room without permission, Elsie!"

Keima, without knowing why he had responded like that, quickly left the room. Elsie, becoming impatient,

From where Elsie was standing, she was looking at his back as Keima was muttering.

With no more than a glance at his back, she observed him leaving the room. With her finger touching her mouth,

She thought about Keima's speech. And then, coming back to her senses,

She chased after him...

That sort of voice echoed across the Katsuragi house. This happened at noon on a Saturday.