And with that, this is Kamachi Kazuma.

Complete!! I guess this is the first time I’ve written a definite end to long series. I’ve worked on a few different series, but The Zashiki Warashi of Intellectual Village didn’t have a normal beginning from even the earliest stages and I think there were seriously more than ten hurdles that had to be cleared before the first volume saw the light of day. Its first physical appearance was in the magazine short story project, but I personally think there were several small miracles even before that.

For example, what if the magazine project itself had not started that year? What if Mahaya-san had refused the project? What if Mayaha-san hadn’t requested I do the text? What if the character roughs had never arrived and the completed illustrations had suddenly arrived just before publication? What if there hadn’t been a precedent of that magazine project leading to a full novel?

And all of those coincidences were out of my control. That’s why it almost feels like a divine miracle that all the pieces fit together so the first volume could be released.

Of those, I think the biggest one was the great impact of the original character roughs Mahaya-san sent over. You might be able to tell how much of a shock it was if I tell you that was what led me to carelessly write 400 pages of text for what was supposed to be a 2-page magazine project and that the story eventually grew into what you hold in your hands.

Even after that, Mahaya-san has been the type to provide a lot of detailed character roughs, so while I’m working, I end up thinking I’ll be in trouble if I start thinking this extraordinary environment is normal. I always have to remind myself that I can’t let myself grow too used to it.

And due to that process, this series was unlike my others in that I started it without knowing how it would end. I just threw in what I wanted to see, what I wanted to do, and what I wanted to try out at the time and then used the foreshadowing that created to connect to the next volume. (For example, Volume 1 already stated that Hyakki Yakou’s leader was dead and Volume 4 had the Zashiki Warashi crying because of Shinobu and the Aburatori’s relationship.) I just repeated that process to create one long line, so this may have had the most experimental structure of any of my series. That’s why there were multiple candidates for Jinnai Shinobu’s perfect form. You might think of the A Simple Series when it comes to experiments, but in a way, Intellectual Village was even more experimental than that. So I of course didn’t know what the final boss would be when I started the first volume. When I looked back over everything I had written and linked everything together, I realized it was the idea of inevitable decline. That had destroyed Hyakki Yakou’s “parent organization”, Hafuri and Majina had cursed it, and it could be seen in the predetermined ruin contained within the fortune brought when a Zashiki Warashi settles down. I’ll leave it to you to decide if it fit as the theme of the series.

One especially important aspect this time was the protagonist(s?). Jinnai Shinobu, Uchimaku Hayabusa, Hishigami Mai…and I can tell you now, there’s actually one more. Back when I saw this as magazine short stories, I had a protagonist pair for each of the four stories I had quickly prepared, but do you know who they were?

The three protagonists that came to the forefront were all intentionally given characterizations that deviated from the usual Kamachi Kazuma style of story. That’s what gave me some freedom to have them do things I normally couldn’t have my protagonists doing. The most obvious example is probably Mai, but it applies to Shinobu and Hayabusa too. It might be fun to think about how it applies to them.

Going the standard route, playing it safe, and using a demerit system is useful if you’re aiming for the top, but if you keep doing that, the land grows barren and you wander into a dead end. I remember arranging the characters and gimmicks for Intellectual Village while trying to expand my horizons as much as possible. You might be able to see that in the fact that there isn’t a good word to describe the overall genre of the series. I’ll let all of you decide whether “occult comedy” really fits or not.

Due to Kamijou Touma’s memory loss in Index and the starter pack plus expansion pack structure of Heavy Object, I felt like I hadn’t had a chance to do much in the way of flashback stories, so being able to do that in Intellectual Village may have been the best part. It was fresh and fun making connections between the characters such as Shinobu’s blond hair coming from the influence of Hayabusa in his high school days.

I especially liked using a time paradox to bring back Majina and the others as enemies at the end of Volume 7 even though they were supposed to be dead before Volume 1 even began. I also liked showing that good acts do not always bring about good results.

This is going to get a little meta, but one more thing.

In Volume 9 especially, I took advantage of my chance to write about a lovey-dovey couple after they get together, something I haven’t had much of a chance to do. (As you know if you’ve read it, Chapter 1 was quite comfy in a way different again from Waltraute.) It turned out Hayabusa and Enbi were only being distracted by the Ver. 39, but I still enjoyed writing about them as much as about Shinobu and Yukari. I just regret that I didn’t make anyone on Mai’s level who could be her lover!!

On that note, I did consider having Mai show up in the Metropolitan Police Department instead of Shikimi. (Yes, they were close enough for Mai to have Hayabusa meet her in a café in Volume 1). Then the sisters would have been fighting over him, but since that would have overshadowed the sub-heroines, I went with the way you saw it. Just like with Perfect Shinobu, if Hayabusa had abandoned the path of a police officer for some reason and gone for another form of justice such as a private eye, a mercenary, or a bodyguard, maybe he could have had both Killer Enbi and Agent Mai for himself? But anyway, I think Mai’s idea of romance would be something similar to a female praying mantis.

Now, to be honest, I don’t actually know that much about Youkai.

Compared to Western magic, I think my pool of knowledge was quite shallow. You can see that in the fact that the first story of Volume 1 used the super popular Youkai girls of the Zashiki Warashi and the Yuki Onna. But the more I dug into the topic, the more I found. It was quite refreshing and I remember filling the story with all sorts of Youkai and their traits.

Among those, my favorite was the Aoandon.

When you talk about the most powerful Youkai, people tend to think of the Kurama Tengu or the Nine Tailed Fox, but the Aoandon gathers together the strange phenomena of one hundred ghost stories, conveniently appears at the end of the Hyakumonogatari, and has an artificial origin since she was invented by a famous Youkai artist. As a combination of one hundred ghost stories, I thought she could singlehandedly rival the Hyakki Yakou which is made up of one hundred different species. Plus she’s a blue female Oni. Everything about her tugged at my heartstrings. Hishigami Mai used the Deadly Dragon Princess, an entirely artificial Shikigami, but I think the Aoandon transformed into something similar within me.

I used the idea that Youkai exist outside the normal human frameworks by having them be paranormal beings that surpass physical phenomena while also not being clearly good or evil.

I did this to help fight my usual bad habit of making characters clearly good or clearly evil (although this shouldn’t be surprising since my other series are battle-focused).

Lastly, Volume 9 completes the Zashiki Warashi of Intellectual Village and I think it suggests another perfect form for Jinnai Shinobu. The important part is that this version is not standing back to back with the Perfect Shinobu in Volume 5 Side A and they aren’t opposites. I think you need to see them as facing the same direction as they walk along parallel paths that will never cross.

Jinnai Shinobu intentionally used his Youkai-attracting trait, made his own Package despite hating them so much, and did everything he could to save the Zashiki Warashi. They were the “same” boy up to there, so what was the difference between that one who reached Volume 9’s ending and the Perfect Shinobu who did not? I hope you will discuss that amongst yourselves.

I give my thanks to my illustrator Mahaya-san and my editors Miki-san, Onodera-san, and Anan-san. As I already said, this series was made possible by a number of small miracles from start to finish. If even one button had been pressed wrong along the way, not even the first word would have been written. I must thank them for everything they did to bring about that success. Thank you very much.

And I also give my thanks to the readers. When I started Volume 1, I never thought this would be a story of Jinnai Shinobu growing up after remembering his kindness, but how did you like it? I hope you will accept their conclusions with surprise and kindness.

Even now that it has ended, I hope it will remain in your hearts.

There is a lot of mystery and fun quite nearby, isn’t there? 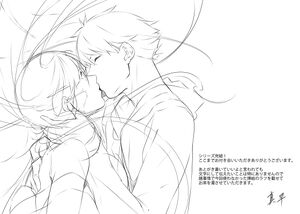 Thank you very much for sticking with us this far.

I was told I could write an afterword, but since I don’t really have anything I want to say in words, I’ll just use an illustration rough that wasn’t used in the volume itself for a variety of reasons.